Trump Jr. implored the crowd gathered at the Colonnade Center in Catoosa County on Saturday afternoon to not only vote but to vote early, call friends to vote, and speak to fellow constituents about the stakes of the election.

“Do not squander this opportunity,” Trump Jr. said. “Because I promise you, you will regret it. You will wake up one day in January and say, ‘Crap. Should’ve done a little bit more.’ Whatever you would do to reverse that feeling then, do it now.”

Perdue and Loeffler are facing Democrats Jon Ossoff and Rev. Raphael Warnock in Senate runoff races on January 5, and at least one of the two Republican candidates must win for the GOP to retain its Senate majority.

“There’s way too much at stake, guys, for ourselves, for our families, for our freedoms, you know, all those things the left doesn’t really believe in. I still do. That’s why I’m doing this,” Trump Jr. said during the third of his three campaign stops scheduled in Georgia for the weekend.

The president’s eldest son also asked the crowd to “continue fighting” for his father. “This isn’t just the Senate, but it’s also my father’s legacy and his accomplishments,” he said. “All of those things that they’ll try to take away, all of the freedoms that he fought for.”

Trump Jr. was joined at the rally by Perdue and Trump campaign senior adviser Kimberly Guilfoyle. 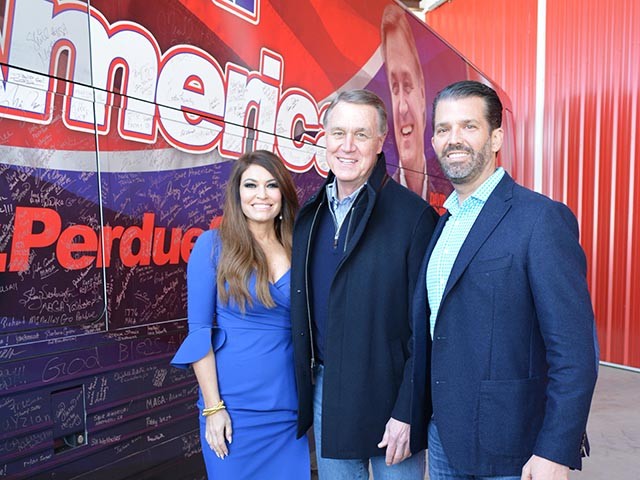 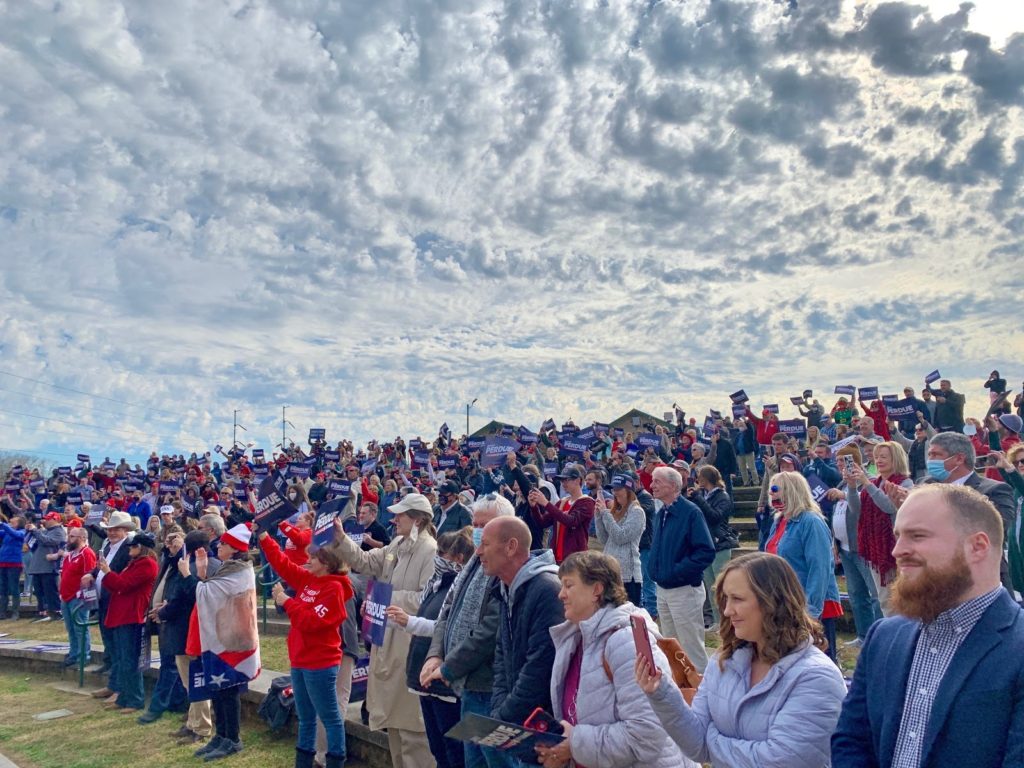 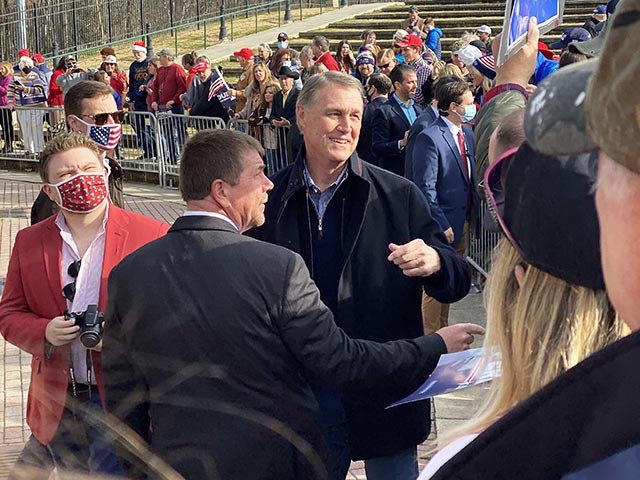 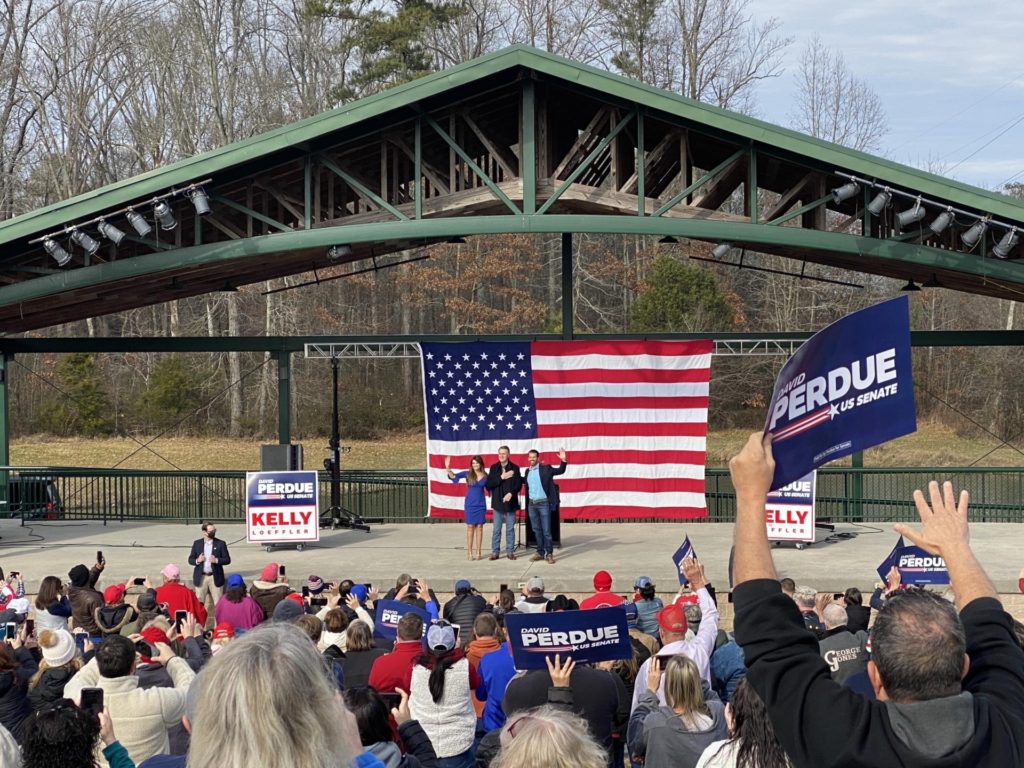 On nationwide economic turmoil resulting from coronavirus-related mandates, Trump Jr. ripped into New York City Mayor Bill de Blasio (D) as an exemplary reason to vote Republican. “You have guys like Bill de Blasio … that destroyed New York City, by the way, minor details,” Trump Jr. said. “He’s saying that New York City’s future depends on this Senate race in Georgia, because he knows that if the leftists win, guess what? You will have the privilege of paying for New York’s incompetence.”

He added, “You notice how those leftist governors— Man, they love taking your freedoms. Not so quick to want to give them back.”

Trump Jr. laid into Democrats who have had run-ins with the Chinese Communist Party (CCP), including Ossoff, Rep. Eric Swalwell (D-CA), and Hunter Biden, and lamented that “no one cares.”

Ossoff omitted from his Senate filings a payment from a company directly linked to the CCP. He later corrected his paperwork and attributed the omission to an “oversight,” but questions remain both about whether the omission benefitted Ossoff in his primary run and whether Ossoff has evidence of the amount of the payment.

Trump Jr. also cited the reported relationship between Swalwell, who is a member of the House Intelligence Committee, and suspected Chinese spy Christine Fang, as well as Hunter Biden’s business dealings in China.

During the rally, Trump Jr. also dismissed the notion that Republicans would sit out voting because of concerns with election integrity. “That’s what the Democrats want,” he said.

“That sounds like a Chuck Schumer and Nancy Pelosi talking point. That’s what the Democrats have been hoping and praying and dreaming for years would happen to Republicans,” Trump Jr. continued, “that Republicans would get sick of it, that they’d be dejected, that they’d end up just sitting at home.”

Overall voter participation in the runoff election is expected to be high, with early in-person voting already underway and absentee ballot requests topping one million.