Photos published by Agence France-Presse (AFP) on Wednesday show schoolgirls in the Afghan city of Herat returning to school this week wearing sanitary masks in lieu of the niqab, a full-face covering the Taliban traditionally required women and girls to wear in public under sharia, or Islamic law.

“Girls wearing white hijabs and black tunics crammed into classrooms in the western Afghan city of Herat just days after the Taliban’s takeover,” AFP reported on August 18. The Taliban terror group seized control of Kabul, Afghanistan’s national capital and seat of government, on August 15. It captured Herat, the nation’s third-largest city, on August 12.

“The scenes — which many feared would be banned under the Taliban — were filmed by an AFP cameraman this week, just days after fighters from the hardline Islamist group took the city following the collapse of government forces and local militia,” according to the news agency. 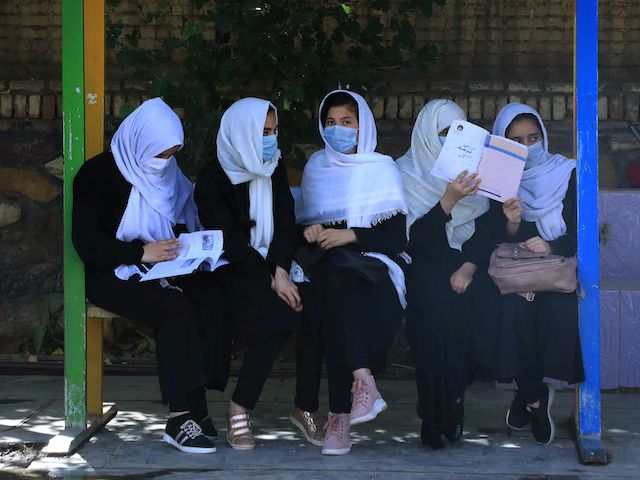 Schoolgirls sit at the schoolyard in Herat on August 17, 2021, following the Taliban’s stunning takeover of the country. (Aref Karimi/AFP via Getty Images)

“People must wear masks,” Majrooh told reporters at a press conference in Kabul on June 3.

The Taliban, now the governing organization over all of Afghanistan, has yet to issue any public statements regarding its pandemic policies at press time.

A jihadist terror group based on Sunni Islam, the Taliban has traditionally required girls and women in Afghanistan to wear a burqa, which covers the entire body from head to toe, in public areas it controls. The Taliban has regained control over all of Afghanistan, including its seat of government in Kabul, and is expected to reimpose its covering policy. A spokesman for the Taliban, Suhail Shaheen, told Britain’s Sky News on August 17, the group will not force Afghan women to wear a burqa but will require women to wear a hijab, which is a veil that can cover a woman’s hair, head, face, and some of her upper body depending on how it is worn.

“The burqa is not the only hijab that (can) be observed, there is different types of hijab not limited to burqa [sic],” Shaheen told Sky News. 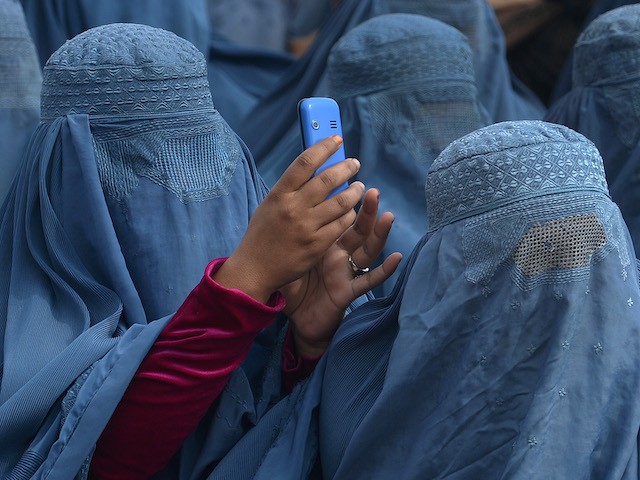 An Afghan woman takes a photograph with her mobile phone as she and supporters attend the election rally of Afghan presidential candidate Abdullah Abdullah in Jalalabad on February 18, 2014. (Shah Marai/AFP via Getty Images)

Hijab may also be interpreted as an umbrella term in Arabic for a woman’s modest dress in accordance with Islam, meaning it could be used to refer to any garment that covers any amount of a woman’s body. A niqab is a nearly full face covering that includes a slit in the garment for a woman’s eyes. The fact that schoolgirls in Herat were pictured this week wearing sanitary masks coupled with a hijab, and not a traditional niqab, suggests the Taliban are temporarily allowing the combination as a substitute for the niqab during the Chinese coronavirus pandemic.