Taliban “Interior Minister” Sirajuddin Haqqani, a U.S. “specially designated global terrorist,” handed out land and cash rewards to the families of jihadist suicide bombers in an event in Kabul on Tuesday, declaring them the “heroes of Islam.”

The Taliban, an Afghan terrorist organization, took over Afghanistan in August after President Joe Biden refused to abide by a peace deal that the former Afghan government, the Taliban, and the administration of former President Donald Trump agreed to before Biden’s arrival in the White House.

Biden’s decision to extend the 20-year Afghan War, rather than keep to Trump’s deadline to withdraw from the country, prompted a national military assault by the Taliban that resulted in their capture of Kabul and the abrupt flight of former President Ashraf Ghani, allegedly with $169 million in tow.

Biden’s foreign policy also resulted in millions of dollars in American military gear falling into Taliban hands, which the Taliban later displayed in a victory parade in the city of Kandahar.

Taliban spokesmen have repeatedly insisted that they would not allow terrorists to use Afghan soil for their activities and have pleaded with state actors, including America, to recognize it as a legitimate government.

The efforts appear to be working despite the group’s open and notorious ties to terrorism; the Biden administration praised talks with the Taliban last week as “candid and professional.” 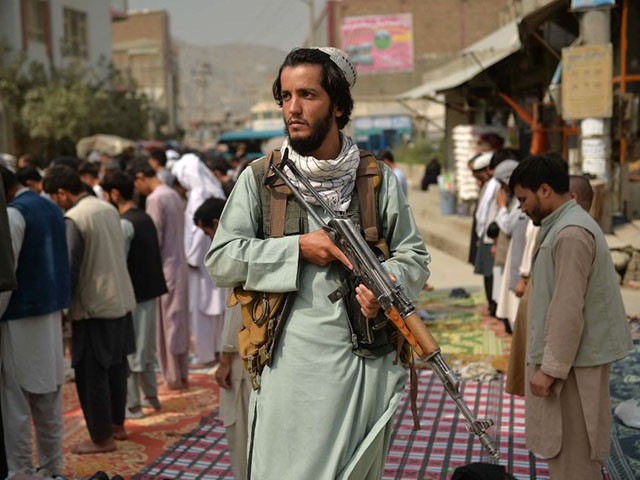 A Taliban fighter on guard as Muslim devotees offer Friday noon prayers at the Aba Saleh Almahdi mosque in Dasht-e-Barchi in Kabul on October 1, 2021. ( HOSHANG HASHIMI/AFP via Getty)

Sirajuddin Haqqani’s giveaway to jihadist suicide bomber families represents the most blatant endorsement of terrorism for the Taliban since taking over Kabul. A spokesman for Haqqani’s “interior ministry,” Saeed Khosty, posted news and photos of the event on social media on Tuesday. The Afghan news agency Khaama Press reported on the news as coming from an authentic Taliban source.

Khosty referred to Haqqani with the honorifics Alhaj Mullah Khalifa.

“In his speech, the Interior Minister praised the jihad & sacrifices of Mujahideen [jihadists] & martyrs. He called them heroes of Islam & the country,” Khosty wrote. The families of the terrorists reportedly received 10,000 Afghanis (about $110) each, some unspecified “clothes,” and a promise that they would receive plots of land in gratitude for their relatives’ mass killings. Khosty did not specify who the suicide bombers the event honored were or which acts of terrorism they committed to have their families invited there.

The images shared in the account show a conference hall packed full of men, suggesting the event honored as many as dozens of terrorists. Some of those in the photos – presumably among them Haqqani – have their faces blurred or obscured by the camera angle.

Notably, the posts about the event represent almost the entirety of the English-language content on Khosty’s account, suggesting the Taliban intended the news to reach the Anglophone world as well as Afghan citizens.

2/3- In his speech, the Interior Minister praised the jihad & sacrifices of Mujahideen & martyrs. He called them heroes of Islam & the country.

H.E told everyone about the memories of the martyred (Fidayeen) their piety & deeds. He called them heroes of the believing nation. pic.twitter.com/Td9Y52kbr0

Khaama Press noted that the Intercontinental is one of Kabul’s most lavish hotels and “was targeted by Taliban’s suicide bombers several times.”

Sirajuddin Haqqani is believed to be the leader of the Haqqani Network, a terrorist entity that maintains the Taliban’s ties with al-Qaeda and other jihadist organizations while the “political office” of the Taliban, headquartered in Qatar prior to the Kabul siege in August, leads Taliban public relations. In addition to an accomplished record of jihadist terror that allegedly includes hotel bombings in Kabul, Haqqani has contributed to the New York Times opinion pages, penning an op-ed titled “What We, the Taliban, Want” in February 2020. The New York Times did not identify Haqqani as a member of the Haqqani Network, but as a “deputy leader of the Taliban.”

In September, reports began surfacing that Sirajuddin Haqqani had received the authority to mandate who in Kabul has access to Afghan passports, potentially allowing the Taliban to prevent Afghans who had aided American operations in the country in the past two decades from fleeing.

While Taliban spokesmen repeatedly denied that the terrorist group sought to kill or otherwise exact revenge on interpreters and others with ties to American and Western forces, widespread reports began surfacing in August of killings of suspected allies at the hands of Taliban jihadists. Taliban leaders denied having given those orders. 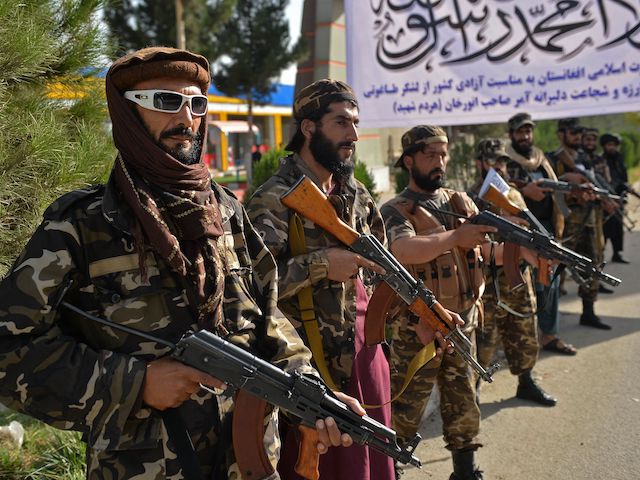 Taliban fighters stand guard near the venue of an open-air rally in a field on the outskirts of Kabul on October 3, 2021. (Hoshang Hashimi/AFP via Getty Images)

The Biden administration reportedly handed the Taliban a list of these individuals, presumably urging the terrorists to let them leave the country, in August.

Sirajuddin Haqqani is one of several members of his family, who run the notorious Haqqani network, offered key roles in the Taliban terrorist government. Taliban leaders appointed Abdul Baqi Haqqani the minister of higher education and Khalil Ur-Rahman Haqqani the Kabul security chief after its takeover in August.