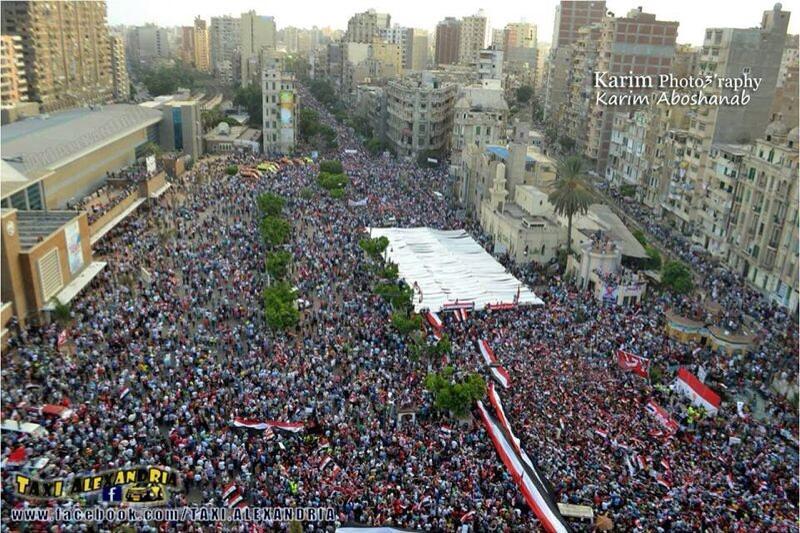 The Egyptian military estimates the demonstrations as “several million” strong. Why is there none of that Present at the Dawning of a New Age urgency to the media’s coverage this time?

Is it because only Obama can bless an Arab Spring? Is because the protests against the Muslim Brotherhood government — a government which Obama supported and continues to support — would be taken as an affront to Dear Leader?

Is it because the thrill of democracy was only thrilling to the media last time because it could be portrayed as vindicating Obama’s very-much-implied Messianic power to change the world?

Why is a democratic, reformist, more secular movement not exciting to the media now? Some reports say that seventeen million have taken to the streets to protest Morsi’s Islamist, repressive, backwards, corrupt, and thuggish government; where is the media interest in the democrats?

Is the Muslim Brotherhood terrorist clownshow the best we can hope for? When there are millions of Egyptians pleading for something better, is our government going to turn its back on them, as they turned their backs on the abortive Green Revolution in Iran?

And a similar uprising has occurred in Turkey, against another Obama ally, the Islamist Tayyip Ergodan. Coincidentally enough, the American media also didn’t think that protest was terribly interesting.

After all, Obama didn’t give a speech about it.

These are very positive, very hopeful, and potentially very momentous events.  These protests might mark the real beginning of the Arab Spring, as people turn from the promises of an Islamist Paradise on Earth towards a more realistic and mature concept of self-government and democracy.

Is the American media really so provincial and so hopelessly partisan that they can’t find any interest in covering them unless they somehow can be cast as Vindications of The One?

I already know the answer, of course.

For all the American media’s pretensions and claims of professionalism, they truly are a vile, childish, unserious and unprofessional bunch of provincial rubes compared to their counterparts in the European press.  The foreign press sure seems to think this is a big deal.  They seem to think it’s an important story in its own right, without any concern of “how it makes Obama look.”