Chad Henderson is the kid who, somehow, became the media’s face of Obamacare sign ups. Yesterday Sarah Kliff at the Post did a story titled “Meet Chad Henderson, the Obamacare enrollee tons of reporters are calling.”

Kliff’s right that the most interesting thing about Chad Henderson is how much attention he’s getting from the media. It’s not just the Post it’s the Chattanooga Times Free Press, the Wall Street Journal, Huffington Post, Politico and WRCB TV.

If you read the Post story you’ll get a bit of Chad’s personal biography and this self description “He describes himself as a supporter of President Obama who has anxiously awaited Obamacare’s rollout.” What the Post and others have not pointed out is that Chad Henderson is not just another Obama voter, he’s a longtime Democratic activist. Here’s a bit of his bio from his Linked In page:

I won’t embed it but there’s a video on his You Tube channel of Henderson in the front row at an Obama rally earlier this year. He also attended an Obama fundraiser last year. And did I mention he’s a partisan? 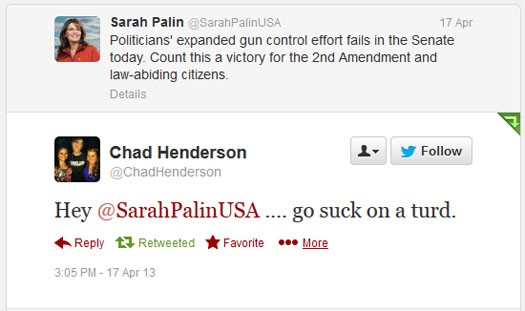 Henderson made it clear how he sees his role in his interview with the Chattanooga Times Free Press “I’m honored, and I’m happy that I could help out with the cause.”

And it’s also worth noting that the media attention Chad got was not entirely unexpected. Here’s the tweet announcing that he’dsuccessfully signed up for Obamacare Tuesday:

Notice that he added the handles for three local newsorganizations, at least two of which have since interviewed him. Now I’m sure he was genuinely surprised by the amount of attention he got (which says something about the success of the roll out) but he was clearly looking to get some media attention for the cause.

Chad Henderson has every right to be a Democratic partisan and to support the Obama administration’s agenda. That’s not the issue. The issue is that media outlets who present his story are not conveying the extent to which Chad is acting as an unpaid extension of the Obama administration. He’s a partisan who has a dog in this fight. That doesn’t invalidate his story but it does put it in context.

If a 21 year old came forward claiming he’d lost his insurance because of Obamacare and he turned out to be a longtime volunteer for the RNC or the Koch brothers, do you think the Washington Post would be content to describe him as a generic GOP supporter? Neither do I.