The Obamessiah shall not be mocked.

The U.S. Department of Justice sent a member of its “Community Relations Service team” to Norfolk, Nebraska, earlier this week, to look into allegations of discrimination over a controversial float in the town’s Independence Day parade.

A meeting was convened on Thursday with the DOJ CRS team member, the NAACP, the Norfolk mayor and The Independent Order of Odd Fellows – the group that organized the parade.

The offending float included a zombie-like mannequin in overalls standing in front of an outhouse labeled “Obama Presidential Library.” This caused some of Norfolk’s citizens to cry racism.

Was the float in poor taste? Sure. Was it tacky? Oh yeah. Funny? That’s in the eye of the beholder, I guess. I found it cringeworthy myself. But racist? I’m not seeing it. I see political satire. You don’t like it? Write a letter to the editor. Come on, people.

Anti-Obama political satire is not only frowned upon in Obama’s America, it’s considered possibly criminal, because the Holder  Justice Department – which refuses to properly investigate the IRS targeting of American citizens – actually saw fit to send an DOJ emissary to the town to investigate a stupid parade float.

The float’s creator, Dale Remmich (this year’s Tuffy the Clown) claims  the mannequin depicted himself, not Obama.

Remmich, who is a veteran, said he was inspired by the president’s handling of the Veterans Affairs Department and the Bergdahl/Taliban trade.

“It’s me. I’ve got on my bibs. Yes, I’ve got my walker. I’m turning green and some say I look like a zombie. But I am not a hate-monger and I’m not a racist,” he said.

Remmich added he did not mean any disrespect for the presidency. He also said one of the reasons that contributed to the making of the float is the ongoing issues of the Veteran’s Affairs administration.

“I have three very close friends that are under VA care, or lack there of it, right now.”

Remmich said the second reason he constructed the float was because he was disappointed with the government’s handling of the Bergdahl scandal. “I tried to use political satire as best I could, but to be honest with you it’s mostly political disgust, simply no more or no less.”

Leftists showed their disgust for George W. Bush in all sorts of creative ways during the Bush years, too. In fact, death threats posted on placards were a common sight at anti-war protests. The reason most people don’t know about them is because the media went out of their way to avoid covering the dark and ugly side of the anti-war movement, and if any of  the threats were ever investigated, no one ever heard about it.

Photojournalist Zombie – who documented the ugliness for years – wrote in August of 2009 about the gross double standard.

Every threat to Obama is now vigorously pursued, trumpeted and dissected by the media and the blogs, and roundly condemned. And I condemn such threats as well.

But in the past, whenever someone threatened Bush at a protest, there was a deafening silence on the part of the media and the left-leaning blogs, and consequently very little (if any) follow-through on the part of the Secret Service. Which I find quite distressing. I was condemning those threats in the past (as best I could, by drawing attention to them on my blog) — but few people were joining me in my condemnation.

Hit the link above to view some truly despicable anti-Bush signs.

I suppose the statute of limitations has run out for Holder to investigate this one. 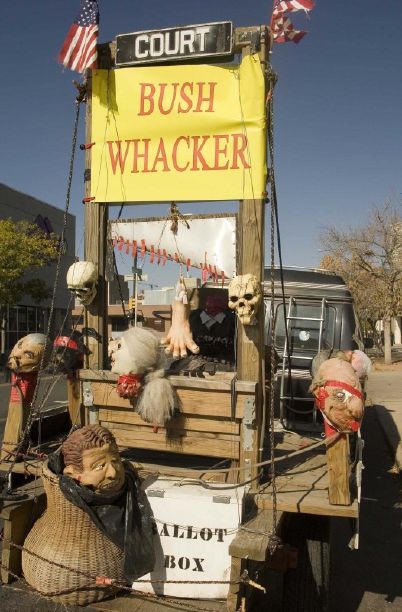 In case you’re wondering – yeah, that’s Bush’s head in a basket after being decapitated by a guillotine, at an Obama campaign rally, Denver, October 26, 2008.