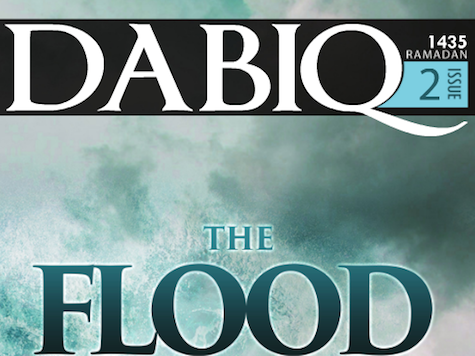 The  Islamic State (ISIS), an organization of terrorists, took control of Iraq’s largest dam as well as an oilfield and three towns on Sunday after crushing Kurdish forces, Reuters reported.  According to the report,  seizing control of  “the electricity-generating Mosul Dam, after an offensive of barely 24 hours, could give the Sunni militants the ability to flood major Iraqi cities or withhold water from farms, raising the stakes in their bid to topple Prime Minister Nuri al-Maliki’s Shi’ite-led government.”

ISIS’s seizure of the dam happened on the heels of releasing the 2nd issue of its online magazine known as Dabique. Dabique’s issue is called “The Flood” with the threat on the cover, “It’s either the Islamic State or the flood.” The “flood” issue of ISIS’s Dabique talks about punishing sinners by drowning them through a massive flood.

The Special Inspector General for Iraq Reconstruction said in 2007 that the Mosul dam was quite unstable and could very well collapse at any moment. In fact, in 2006, the Army Corps of Engineers said it was the most dangerous dam in the world. The BBC reported in 2007:

“In terms of internal erosion potential of the foundation, Mosul Dam is the most dangerous dam in the world,” the corps warned, according to the SIGIR report. “If a small problem [at] Mosul Dam occurs, failure is likely.”

The top US military commander in Iraq, Gen David Petraeus, and US ambassador Ryan Crocker wrote in May to Iraqi Prime Minister Nouri Maliki urging him to make fixing the dam a “national priority”.

“A catastrophic failure of the Mosul Dam would result in flooding along the Tigris River all the way to Baghdad,” the letter on 3 May warned.

“Assuming a worst-case scenario, an instantaneous failure of Mosul Dam filled to its maximum operating level could result in a flood wave 20m deep at the city of Mosul, which would result in a significant loss of life and property.”

If that were to happen some have predicted that as many as 500,000 people could be killed.

“Meaning, it wouldn’t be hard to let it loose. If [IS] wanted to take Baghdad, a massive tidal wave down the Tigris killing potentially hundreds of thousands would certainly provide the destabilization they needed to make it happen. The dam also provides a considerable portion of Iraq’s electricity,” counter-terrorism expert Patrick Poole told Breitbart News.

Canada’s CBC points out that capturing the dam give the “Sunni militants the ability to flood major Iraqi cities or withhold water from farms.”