Reporters with both the Washington Post and Huffington Post were detained and allegedly roughed up by police in Ferguson, Mo tonight, according to multiple reports. Both chronicled their ordeal via social media and the Washington Post’s executive editor has released the following statement. 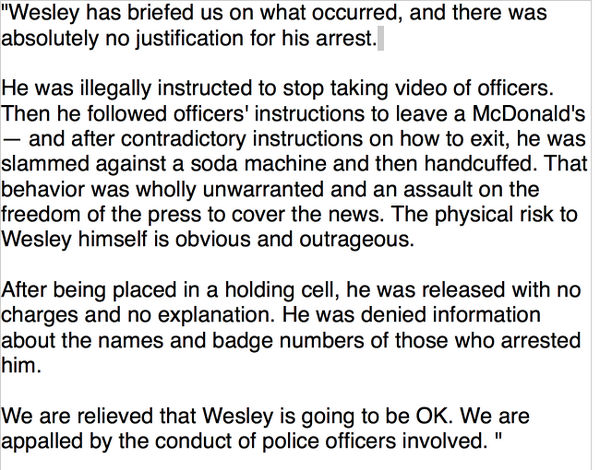 The Huffington Post’s Ryan J. Reilly and the Washington Post’s Wesley Lowery were arrested after being confronted by police inside a McDonald’s restaurant. Reportedly, “about half a dozen police officers came into the restaurant, Lowery said. Some officers were in regular uniforms, while others were dressed in riot gear and carrying assault weapons.”

“It was tense,” Lowery said via telephone from the police station on Wednesday night. “I’ve been afraid several times while reporting on the ground here in Ferguson.”

Lowery has been reporting on the situation in the city outside St. Louis following the death of Michael Brown, who was shot and killed by police over the weekend.

Patrons working in the McDonald’s, which reporters had been using as a staging area near demonstrations, were ordered to leave, Lowery said. When the journalist said they were working members of the media, the police told them that was fine, but they couldn’t guarantee their safety.

Police then left and returned a short time later, Lowery said, this time demanding that the reporters leave. Lowery began filming a video on his phone while also using his other hand to pack up his things. An officer objected, Lowery said, but did not press the issue.

Lowery was directed to leave through one door, and then told to go through another, at which point his bag fell off of his shoulder.

“‘Okay, let’s take him,'” one of the officers said, according to Lowery.

Lowery said that at this point, he was slammed against a soda machine and plastic cuffs were placed on his wrists. He was trying to make it clear he was not resisting arrest, but it did not appear the officers believed him. “That made me, frankly, fear for my life,” Lowery said.

Both Lowery and Reilly Tweeted significant portions of their ordeal.