FALFURRIAS, Texas — The death march through Brooks County, Texas claimed the life of yet another illegal immigrant. A human skull and the decomposed skeletal remains are all that is left of a person who decided to come to this country illegally. A total of 42 bodies have been found this year in the desert-like ranch fields surrounding the town of Falfurrias.

The body was reported by another illegal immigrant who had been captured the day before. A search of the field, located on the northern portions of the Cage Ranch by Border Patrol agents found the decomposed body under a mesquite tree not far from the natural gas pipeline being constructed through the western portions of Brooks County. 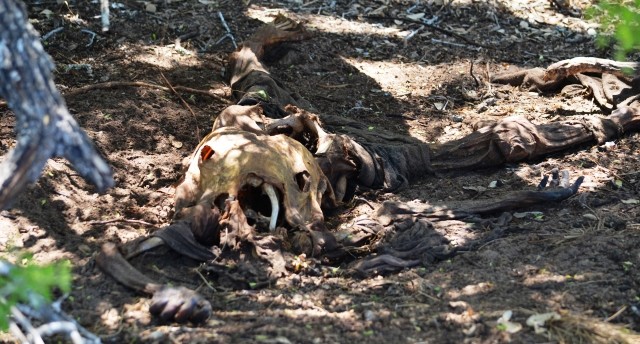 Benny Martinez, chief deputy for the Brooks County Sheriff’s Office, invited Breitbart Texas to ride along with him and the local justice of the peace who had to make the formal death declaration. The drive from Highway 281 to the scene of the death was about five miles as the crow flies, but to drive there was about nine miles of very difficult driving in deep sand.

Only a four wheel drive vehicle could make the trip, but four wheel drive was not enough for Martinez’s truck. At one point we became bogged down in the sand and had to be pulled out by the Border Patrol. It took about 30 minutes to make the drive to the scene where the body was found.

The body was found lying under a mesquite tree. It appeared the person just gave out from lack of water and possibly heat exhaustion. As the body has not yet been identified, no details of the person are being released at this time.

Animals had taken their toll on the body as there were mostly skeletal remains. The skull was located about ten feet away from the rest of the body.

The grisly scene was a pointed reminder of just how dangerous this journey is and how desperate the illegal immigrants must be. However, Breitbart Texas has learned through the ride along drives with the non-paid deputies who volunteer to help Brooks County that the immigrants are often not told the truth about what lies before them on this trip.

“The immigrants tell us,” Deputy Daniel Walden said, “the coyotes tell them it will be a thirty to 45 minute hike around the checkpoint to where they will be picked up again by the smugglers. The reality is, this is a three or four day march in the very hot sun. And that is if they don’t get lost.”

Chief Martinez told Breitbart Texas this is just the beginning of the death season in this county. “We have found 42 bodies so far this year,” Martinez said. “But we think we only find about one in ten. It must be a horrible experience for these human beings to die this way.”

“This is exactly why we volunteer our time,” Deputy Walden said. “The more of these people we can capture before they dive off into the brush, or the more we can pick up by being out on patrol, the fewer who will die in these fields. Our non-paid police officers who volunteer their off-duty time and drive over a hundred miles to come to Brooks County to patrol do so to save lives, protect the citizens of this county we don’t even live in, and provide back-up to Brooks County deputies who are regularly out on patrol by themselves.”

Each body found in Brooks County costs the county about $2,500 in medical examiner and funeral expenses. This does not include the time of county employees to document the death. The 42 deaths this year have cost the county, the poorest county in Texas, over $100,000. These are funds the county does not have and forced the county to cut salaries of deputies to about $25,000 per year and strip away their health benefits. The county is down to one paid patrol deputy per shift. The volunteer deputies try to fill the gap.

Deputy Walden is a volunteer reserve deputy for Brooks County. In his regular job, he serves as acting police chief of the Donna Independent School District Police Department. He has organized the Border Brotherhood of Texas, a group of sworn police officers who are volunteering their time to help the distressed Brooks County Sheriff’s Office.