Acknowledging that the “plight of [the] unaccompanied minor children has rightfully captured national attention,” Perry said that out of the people currently being apprehended at the border, minor children constituted only 20 percent. The problem, according to Perry, is that the drug cartels are “exploiting this tragedy” while the Border Patrol is being pulled away from their enforcement activities.

Perry cited the public safety issues compelling him to act, including the high frequency of criminal activity by foreign nationals in Texas, averaging about 640,000 crimes annually. This includes over 3,000 homicides and around 8,000 sexual assaults. Calling the Rio Grande Valley the “center of gravity” for cartel activity, Perry said “the price of inaction is too high for Texans to bear,” so deployment of the National Guard was necessary. 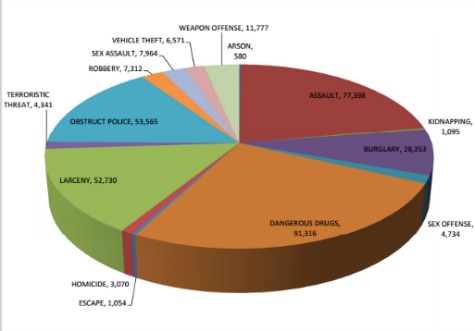 Voicing frustration with the “federal government’s lip service and empty promises,” Perry pointed out that Texas has invested a half a billion dollars so far in increased border security, and has already seen positive effects from the enhanced enforcement efforts under Operation Strong Safety. In just a few weeks of active engagement, apprehensions of illegal immigrants in the area covered by Operation Strong Safety have dropped by 36 percent, from more than 6,600 per week to 4,200 per week.

“There can be no national security without border security, and Texans have paid too high a price for the federal government’s failure to secure our border,” said Perry. “The action I am ordering today will tackle this crisis head-on by multiplying our efforts to combat the cartel activity, human traffickers and individual criminals who threaten the safety of people across Texas and America.”

Perry then turned the press conference over to General Nichols, the leader of the Texas National Guard who would be overseeing and directing their efforts on the border. Nichols pointed out that the objective of the National Guard troops was to act as “force multipliers” for DPS and local law enforcement, to “deter and refer” to DPS for more direct action. By being a visible presence on the border, the National Guard troops would discourage border crossings, and they would be able to act as the eyes and ears for DPS officers, who would be the ones actually detaining people in most circumstances.

Nichols also pointed out that this was not an unusual militarization of the border, since the Texas National Guard was a consistent and regular presence along the border filling a variety of roles, including Operation Lone Star, a health care operation. Most National Guard troops have medical and first aid training, and would be prepared to render aid as needed in this current deployment. Nichols said that they were looking at the legal side of the proper scope of their role very carefully and emphasized again that the current plan was focused on “deterring and referring,” not actively retaining anyone. Some of the assets that would be used in this effort would include helicopters with infrared vision, capable of detecting people on the ground at night or under cloud cover, who would then be reported to DPS.

Lieutenant Governor David Dewhurst echoed Perry’s frustration with the federal government’s years of inaction and the burden on Texas taxpayers, saying, “I’m mad, and most Texans are mad” about the situation. Dewhurst stated that it was “not just our right, but our responsibility” to act where the federal government wouldn’t. “The media would have you believe it’s all about unaccompanied minor children,” he added, but that issue “could be solved today by passing the Cornyn-Cueller bill.” Dewhurst also pointed out that the cartels were taking advantage of federal wildlife sanctuary areas to evade enforcement efforts.

Praising Perry’s “decisive action,” Attorney General Greg Abbott said that “this is more than just a border crisis, affecting a few states, this is a national crisis.” Abbott said that the situation was indeed a humanitarian crisis, but also a public safety crisis, for Texans as well as the people crossing the border. “One sexual assault, or one life lost is too many.” Abbott expressed optimism that the federal government would do the right thing and fund Texas’ border enforcement activities. But regardless, Texas was prepared to act. He said, “Texans are willing to put boots on the ground but we expect Washington to foot the bill.”

The press conference concluded without the Governor addressing whether or not a special session would be called to address the border crisis. Breitbart Texas is continuing to monitor this story, including live reports from the border and exclusive interviews with Texas officials.

Sarah Rumpf is a political and communications consultant living in Austin. You can follow her on Twitter at @rumpfshaker.