DALLAS, Texas–The National Day of Protesting Against Immigration Reform/Amnesty & Border Surge was felt around that state the weekend of July 18-19. In Dallas, protesters came out against pro-illegal immigrant judge Clay Jenkins on July 18. Breitbart Texas was at Dealey Plaza across from the downtowncourthouse where Jenkins has been working on his controversial plan to bring 2,000 undocumented alien minors into Dallas County and house them among three potential vacant public school sites.

The people stood firm in opposition to illegal immigration. Residents of Dallas were also joined by people from Collin and Kaufman counties in a peaceful protest against Jenkins, the federal government, and “lawlessness.” Protesters like Dallas businessman Bruce Fogerty, who, along with Numbers USA donated signs to the protesters, did not blame the unaccompanied alien minors but did blame the state and federal government. He told Breitbart Texas he was for legal immigration. “This is a created crisis where our government refuses to enforce the law,” he said. 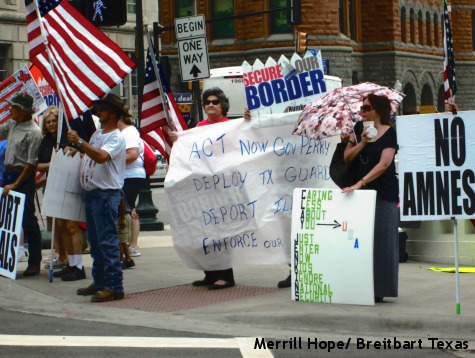 Other protester concerns included the overwhelming burdens Americans will face from the tidal wave of illegal immigrant children into the US including school overcrowding, disease, and costs to the American taxpayer. Many felt that the shabby treatment of US military veterans should hold a much higher priority to this nation.

People streamed in and out throughout the five hour protest. Organizer Valerie Villarreal, Overpasses for America Texas state leader, and a Plano resident, told Breitbart Texas the head count was approximately 300.

It was a diverse showing of white, black, and brown Americans standing against Jenkins and who stood for securing the border. A US soldier from Modesto, CA, Verna Owens, pulled his car over in traffic to ask for a “Secure the Border” sign. Other cars zoomed by giving thumbs up from drivers and horn honks of approval. One even waved a sizeable flag out his car window.

The American flag was joined by the Texas, Gadsen, and even the original 13 states flag at the patriotic protest. In addition to “Secure the Border” signs, “Impeach Obama,” “No Amnesty” and “Deport Illegals” were prevalent. There were shouts of “USA!” and one protestor called out. “Stop the invasion!” Another said, “Stop the busses!” They stopped them in Murrieta, they stopped them in Arizona, time to stop them in Texas.”

Villarreal told Breitbart Texas, “I always felt safe and secure in Texas. Now my country is being destroyed slowly.” She also noted her sorrow that the federal government is dissolving the border and using our tax dollars to do it.

Another protester told Breitbart Texas, “I am upset about the lack of procedure and due process for Jenkins making this decision on behalf of Dallas County.” She asked to be identified as a volunteer at the convention center during Hurricane Katrina and for the Dallas County Medical Reserve Corps, a division of the county’s Health & Human Services. “If this is what Jenkins is going to do on his own, I hate to see what he does next,” this woman added.

Jenkins was not at the protest, although, he issued a statement: “Leaders can empower grace and mercy or incite fear and anger but it’s the community that responds. Dallas County residents have overwhelmingly chosen compassion.”

“Compassionate to whom?” posed Villarreal. “Veterans who are homeless and being badly treated or not treated at all,” referencing the VA scandal. Villarreal was deeply concerned that the federal government is not taking care of its heroes because they claim they don’t have the money “but they have for money for illegals?”

Ron Murphy from Arlington echoed Villarreal’s sentiments when he told Breitbart Texas, “It’s vets over illegals any day. If both sides can’t understand that, then we truly have a problem. Caring for our military veterans, that’s true compassion.”

Murphy, like many of the other protesters, favored legal immigration once “we secure the border.” Also, on July 19, Murphy organized the North Fort Worth overpass protest with Texas Overpasses for America.

A number of protesters also voiced their concern for American Marine Sgt. Andre Tahmooressi’s predicament following an accidental border crossing that resulted in his imprisonment in Mexico because he had guns in his truck as Breitbart News reported.

The pro-Jenkins side came equipped with their feel-good for the cameras message of “We Love Children” and “Standing on the Side of Love” although when the overflow of the anti-Jenkins crowd spilled over onto the median where they, the noticeably smaller group stood, one Jenkins supporter got loud and testy about the opposition being on what they decided was their side of the street.

She also insisted “we must assume that the parents of these minors are here working and they will be reunited,” although she couldn’t say they were here for a fact. Instead of “illegals,” Mendoza preferred the label “refugees.” She stuck closely to her talking points on compassion for the migrant minors crossing the US border illegally and told Breitbart Texas that the undocumented alien children should “be cared for and be able to stay” regardless.

She told Breitbart Texas that we must put “politics aside” and respond to the humanitarian crisis. When asked what she knew about US immigration policy, Mendoza admitted she never heard of “political asylum.”

One of their signs called Americans “descendants of illegal immigrants.” Another read, “We pay our taxes, do your research.” Then, there was a banner that said, “What would Jesus do?”

Very thoughtfully, one anti-illegal immigration protester told Breitbart Texas, “Jesus would feed them, care for them and then send them home to their moms and dads.” He added that Jesus never broke the law.

The pro-Jenkins rally was organized by the North Texas DREAM Team, Proyecto Arlington, and Pueblos Sin Fronteras. The protest ran from 11am-4pm. At 2pm, with only one news crew truck still parked nearby, they folded their banners and left.

The anti-Jenkins protest was part of the larger National Day of Protesting. The lead sponsoring organization was Make Them Listen. Other participating organizations nationwide were America Working, Americans Have Had Enough Coalition, Help Save Maryland, MINNSIR, Overpasses for America, 2 Million Bikers to DC, Remember 1986, Riders USA, and New Yorkers for Immigration Control and Enforcement (NYICE).

On Saturday, July 19, anti-illegal immigration rallies continued on overpasses in North Texas including Allen, Arlington, Fort Worth, andRockwall. At the Allen Exchange overpass, residents made a showing in exercising their First Amendment Rights with patriotic flags and signs that sent clear messages: “Secure the Borders,” “Stop the Tyranny,” and “Honk to Impeach Obama.” Protesters took over both sides of the overpass facing north and south bound traffic over Interstate 75. The response from traffic below was a steady stream of horn honks. There were as many as 80 adults and children in attendance at its peak. 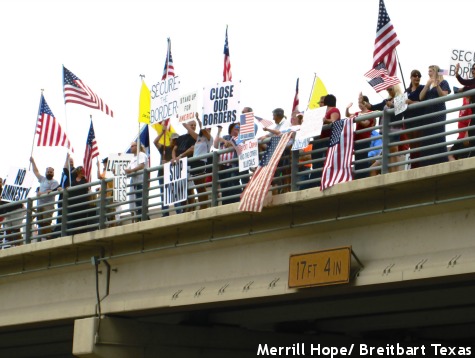 Breitbart Texas spoke to overpass organizer Villarreal, who was heartened by the response Dallas-area residents took over the two days. She said the border situation “has fired up people.”