FALFURRIAS, Texas — Two more bodies of illegal immigrants were discovered in a rural Texas county — bringing the year total for the one county to 48 known deaths.

A 9-1-1 call to the Brooks County Sheriff’s Office led to the discovery. Brooks County surrounds Falfurrias, Texas, which is approximately 80-90 miles from the Texas border with Mexico.

The 9-1-1 call was made by an illegal alien who survived after regaining cell phone coverage in mile one of the nearly seventeen mile journey that the, now deceased, illegal immigrants were making to sneak around a Border Patrol checkpoint.

The caller told the Brooks County dispatcher he was traveling with a group of about twenty people and that they needed assistance. One of the people in the group reported that his cousin had died about 10 p.m. the night before. A woman in the group also reported she had left her husband behind after he had died.

Members of The Border Patrol Search, Trauma, and Rescue Unit (BORSTAR) and Border Patrol Tactical Unit (BORTAC) teams began a search of the Los Federales ranch located at the end of FM 3066 southwest of Falfurrias. After they discovered the first body, who was actually the second death from the group, Breitbart Texas traveled with Brooks County Deputy Elias Pompa, volunteer Reserve Deputy Cameron Coleman and Precinct 2 Justice of the Peace Oralia Morales to witness the recovery of the Mexican man believed to be in his mid-twenties. Upon arrival to the scene, about a mile from the roadway, it was observed the victim’s face had been covered by the other members of his group and his head was propped up by a makeshift pillow of his shoes and a shirt. 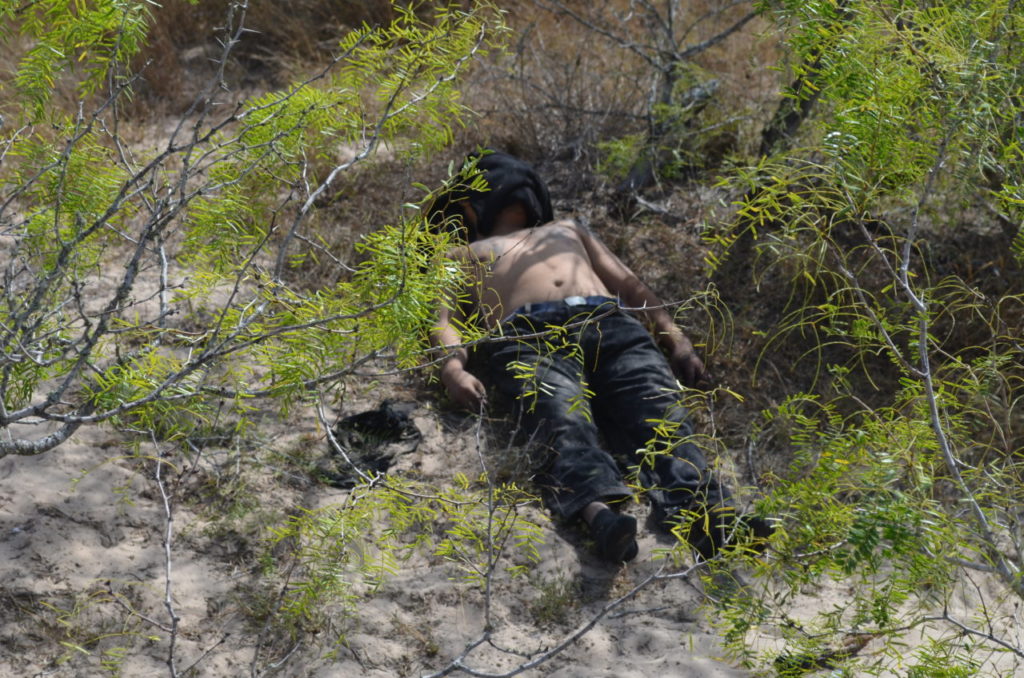 While the man was a Mexican national who had recently entered the country illegally, it was observed that the tattoos which covered his body were in English. Across his chest was emblazoned “Only God can judge me.” His right arm prominently displayed the word BROWN, a known symbol for a gang from the city of Brownsville, Texas according to Deputy Coleman who serves in his regular job as a Hidalgo County Deputy Sheriff and then volunteers to work as a non-paid reserve deputy for Brooks County during his off-duty time.

After pronouncement of death by Judge Morales, the body was loaded into the four wheel drive funeral home vehicle used to recover the many bodies found in Brooks County. This man was number 47 for this year.

Border Patrol agents continued their search for the second body reported by the victim’s wife. He had died about twelve hours earlier that same day and she had to leave him behind. The agents began to attempt to retrace the immigrants’ trail back from where the first body was discovered. About twenty-six hours later they discovered the second body.

Again, Breitbart Texas rode with Deputy Pompa and Brooks County Judge Raul Ramirez. The second body was located on the Jones Ranch about four miles south of where the first body was found. The group had covered the body with grass in an apparent attempt to hide him from the animals. Border Patrol agents told this writer they nearly missed the man’s body because it was so well covered. The odor of death, however, led them to find what they were looking for.

This recovery effort began at about the same location where it is believed the group of illegals had been dropped off by their smuggler, one of the entrances to the massive Jones Ranch located on County Road 314 southwest of Falfurrias. The recovery team consisting of Deputy Pompa, Judge Ramirez, the funeral director and several Border Patrol search specialists began a nine-mile drive through the soft sand the immigrants had been walking through for days. Because of the trail’s conditions, eventually the vehicles could go no further and the team began a rugged hike for about another mile and a half to the body’s location. The video below shows some brief snippets from the journey in and out of the body recovery.

The victim was found covered in grass lying face-down under a group of Oak trees. He was pronounced dead by Judge Ramirez and searched for identification and personal belongings. The body of the Mexican national was then placed in a bag and a team of Border Patrol agents acted as pall bearers to carry him for the mile and a half trek back to the funeral vehicle.

Six other members of the group had been captured by Border Patrol agents who responded to the initial 911 call for help. This included the cousin of the first victim and the wife of the second who provided identification of the bodies. Then names of the victims is being withheld pending formal release by the medical examiner. The remaining twelve members of the group were being searched for earlier this week by Border Patrol agents. 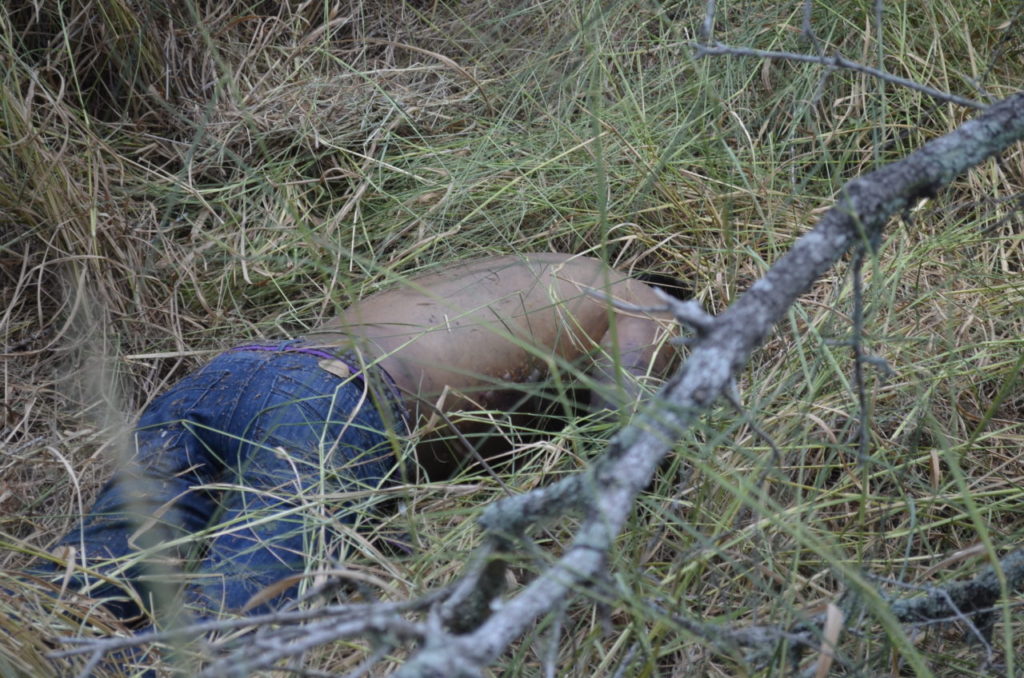 This is a far too common scene in Brooks County. The cost of the burial of these individuals must be borne by the county’s taxpayers. This has led to severe budget cuts in the county and the reduction of deputy sheriffs to only one deputy per shift. Because of this, a group of certified peace officers like Deputy Coleman have formed a non-profit group called the Border Brotherhood of Texas. These peace officers drive over 100 miles to come work at least two 12-hour shifts per month with no pay.

A Facebook page has been set up for the group where readers can learn more about their activities and fund raising efforts. A PayPal account has also be set up for anyone who might to help this battle on the front lines of our illegal immigration and border security battle. While Brooks County is not a border county, the U.S. Border Patrol checkpoint gives Brooks all the problems of a border county with none of the funds border counties receive to help their law enforcement efforts.