HIDALGO COUNTY, Texas — Troopers from the Texas Department of Public Safety (DPS) rescued a Guatemalan woman who had been left to die by her human smugglers in far north Hidalgo County. She was found along Highway 281 approximately 60 miles north of the Texas/Mexico border.

The DPS trooper, while on patrol north of Edinburg, Texas, found the woman sitting alongside the highway. When he approached her, she explained in Spanish that she was from Guatemala and had been dropped off in the area to start a hike around the Falfurrias Border Patrol Checkpoint in neighboring Brooks County. She reported she was feeling ill from lack of water. The trooper gave her water and she quickly responded that she was feeling better.

The woman was in no condition to successfully complete the 20-25 mile hike through the soft sandy soil of the ranches and 90+ degree heat and high humidity of the South Texas summer. She was left behind after she apparently was unable to keep up with the group. They left her with no food or water. Had she not found her way to the highway, she likely would have died from heat exhaustion or dehydration.

She told the trooper she had paid a substantial sum of money to the smugglers to get her through the checkpoint and eventually to New York where it is believed she had family members who had loaned the money for her smuggling.

This is an all too common scene in South Texas. Smugglers tell their “cargo” that the hike around the border patrol checkpoint is about a 30-45 minute walk. The reality is, they are about to begin a march that will likely last for days.

Because of increased law enforcement presence in the area, the smugglers have begun dropping off their victims further and further south, increasing the length of the march and the likelihood of more deaths. At the same time the trooper was dealing with this woman, border patrol agents were searching for another group of illegal immigrants who had bailed out of their vehicle about ten miles south of the trooper’s location. The trooper took the woman to that location and turned the Guatemalan woman over to Border Patrol for processing.

At that scene, Border Patrol agents had already captured about 10 people from the group that had bailed out of the smuggler’s vehicle and were holding them in a van while awaiting the results of the continuing search efforts for the balance of the immigrants who fled the scene. 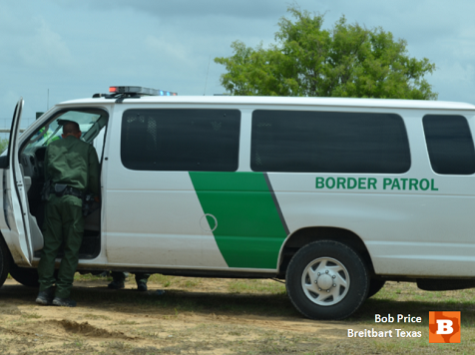 Marching from this location would have meant a journey of about 30-40 miles before this group could have been picked up somewhere north of the checkpoint in Brooks County. Typically, when these groups bailout from their vehicles, they take very little, if any, food or water as they flee.