AUSTIN, Texas — Democratic nominee for Governor Wendy Davis has come a long way since the heights of her pink-sneakered glory days back in June 2013, when she captured the national attention of abortion advocates for her eleven hour filibuster against Texas’ abortion bill. Today, less than two months before the general election, it seems that her party is reduced to hiring roles that should be filled by basic volunteers to keep operations going.

Davis’ attempts to rebrand herself as a defender of second amendment rights flopped, her book is not exactly tearing up the charts but did get her an appearance on Rachel Maddow’s MSNBC show (as well as an ethics complaint), and multiple cutesy messaging gimmicks, like the #BeyonceVoters tumblr blog — abandoned after a flurry of posts in July, never to be heard from again – have failed to gain traction, as Davis finds herself facing ever-worsening poll numbers.

Now, the Davis campaign’s desperation has led the Travis County Democrats to start advertising for paid canvassers. In ads that have  appeared in multiple outlets such as the print edition of the Austin Chronicle and on Craigslist, they are seeking “door to door canvassing” for “up to $14/hr,” although the text of the Craigslist ad says that the compensation is $10.10/hour. 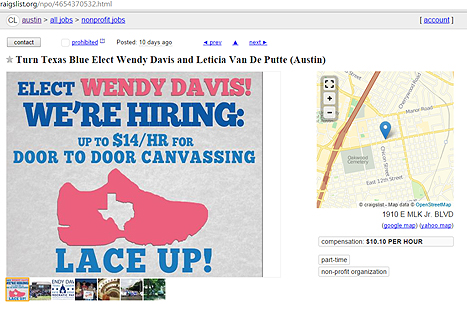 Davis’ official campaign website shows that they are still hiring for several field positions — again, less than two months before the election:

Ads for these positions were placed on Craigslist in August as well, for at least the San Antonio, San Marcos, Killeen, and College Station areas.

Considering that the homepage of their website is down this morning, the Travis County Democrats might want to hold off hiring canvassers and hire a better webmaster: