The Daily Mail reported the flag desecration occurred outside of the Milwaukee Theater where the Republican debate was being held. The demonstrator was said to be protesting the shooting death of an alleged unarmed black man, Dontre Hamilton, by a Milwaukee police officer.

The brother of Dontre, Nate Hamilton, was reported by the local Fox affiliate to have said, “I say destroy the whole constitution, because it never worked to begin with for black people.”

The Fox affiliate reported that officials with the Department of Justice had announced that day that there was insufficient evidence to pursue federal criminal rights charges against the officer. There had been a news conference Tuesday afternoon following the DOJ announcement wherein the family of the slain man was reported to have expressed their disdain for the criminal justice system generally and the findings as it related to Dontre Hamilton.

Hamilton was killed in downtown Milwaukee in Red Arrow Park.

Fox News reported that there were hundreds of protestors gathered outside of the GOP debate. Other than the flag burning, the protests were peaceful. Civil rights groups like Voces de la Frontera Action, and minimum wage activists such as “Fight for $15,” were protesting. Activists for marijuana legalization and pension cuts were also reported to have been at the rally.

Milwaukee Police Chief Edward Flynn said, “You know setting fire to a flag is protected speech. The challenge is what’s the venue in which you choose to do that.” He added, “I will assert setting fire to something in the middle of a crowd of people is an inherently dangerous act. We will bring those charges forward. They will be carefully evaluated by the DA’s office.” 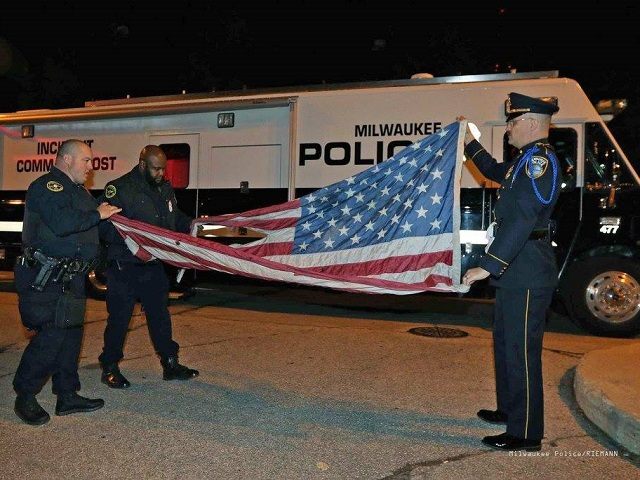 The Police Chief said he had “great pride” that his officers “took pains to protect and respect a valued symbol of the freedom that that individual was exercising.”

Breitbart Texas confirmed with the Milwaukee Police Department that no arrests have been made but that charges are being submitted to the District Attorney.

The man who set the fire has been reported to have been arrested for arson in the past.