Moms Demand Action members posted, “Do[n]’t arrest them just shoot them, these people are crazy,” “Time to use an assault weapon on this trash,” “Just shoot them all…,” and “Mow them down.” Another added, “a**hats. no one has taken your guns. you are the ones causing problems. [P]lease just shoot each other.”

The founder of Open Carry Texas told Breitbart Texas, “It’s my belief that the reason the Moms Demand Action crowd are so opposed to guns in the hands of the public is because they obviously can’t be trusted with guns in public.”

C J Grisham, president and founder of Open Carry Texas (OCT), a Second Amendment and pro-gun group tweeted the group’s comments on their Facebook page commenting, “Moms Demand Action for Gun Sense in America, for a group that is supposedly the halo’d angels of the gun debate,…”:

Moms Demand Action for Gun Sense in America, for a group that is supposedly the halo’d angels of the gun debate,… https://t.co/8t7wsIZZzv

The women were responding to a Time magazine article reporting that Open Carry Texas planned to hand out literature and show attendees at the South by Southwest festival that “gun owners are no different than anyone else.” As reported by Breitbart Texas, President Obama attended the conference held in Austin, Texas. 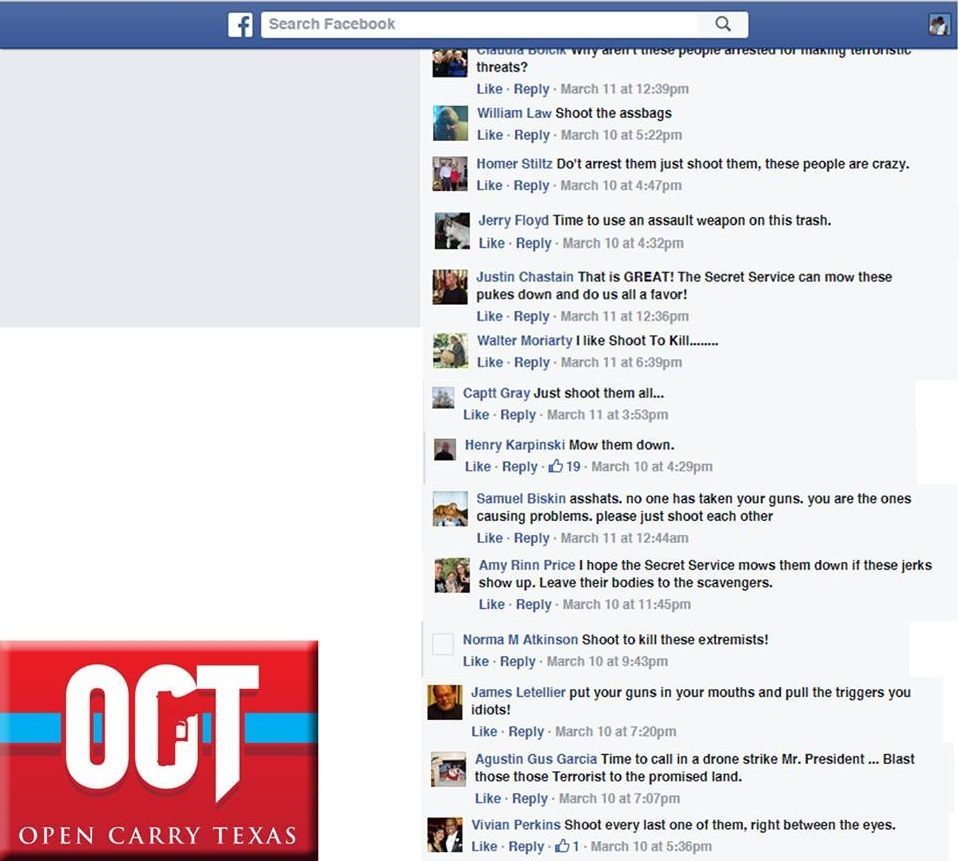 The anti-gun activists posted the Time article on their Facebook page deceivingly stating, “Texas open carry extremists are making threats against President Obama as he prepares to attend South by Southwest.”

The women went berserk speculating that the President’s presence in Texas with gun rights groups blocks away somehow endangered the commander in chief. OCT has attended the SxSW conference during the last three years and planned only to have groups of up to ten people at one entrance of the Texas State Capitol – nowhere near the festival or the president.

One woman posted, “Lock them.up..and throw away the key..we don’t need another assassination on Texas soil..or anywhere for that matter..they threaten..no joke..we take school kids threats seriously ..and not these adults??” Another said, “I hope the Secret Service mows them down if these jerks show up. Leave their bodies to the scavengers.”

In an apparent reference to the 1963 assassination of President John F. Kennedy in Dallas, another MDM member posted, “It’s not a good idea for Democratic presidents to go to Texas. I hope he’s wearing bullet proof gear. All of these treasonous idiots threatening him should be arrested.”

Moms Demand Action for Gun Sense in America is an anti-gun organization funded by Michael Bloomberg. The former mayor of New York City is listed by Forbes Magazine as ranking #14 in the world for billionaires ($37.4 billion). Besides owning a financial news organization, he is a founder of Mayors Against Illegal Guns. Open Carry leaders say he funds the activities of Moms Demand Action in America and in Texas. The group is run by former Monsanto Director of Corporate and Public Affairs Shannon Troughton. Troughton is accused by Lone Star Gun Rights of “hid[ing] her identity by hiding under the name Shannon Watts.”

Alice Tripp from the Texas State Rifle Association told Breitbart Texas during the legislative session that Moms Demand Action “apparently are a politically-motivated organization that appeared for the first time to be attached to a lobbyist.” The group has been accused of “not just being Mommies,” but rather a highly organized political operation. Tripp said there has not been a paid anti-gun lobbyist at the Texas Capitol since 2001. Nina Butts was the lobbyist back then for the Brady anti-gun campaign. Butts left the Capitol after it became dominated by Republicans. Tripp says a Bloomberg-funded lobbyist is now working at the Texas Capitol.

Breitbart Texas helped expose Moms Demand Action when a witness mislead the Texas Senate in May 2015. As reported, a woman testifying for the group was called on the carpet for misleading legislators by implying by omission that the tragic killing of her husband by her son resulted from the use of a firearm. In reality, her son killed his father with a pipe wrench and a knife. The fact that her son owned what she called “an arsenal” had no bearing on the murder. Open Carry Texas produced a short video which contrasted the woman’s testimony at the Capitol with newspaper and television reports about the murder and her son’s trial.

Terry Holcomb, Executive Director of Texas Carry told Breitbart Texas during the 2015 Texas legislative session, “The sloppy tactics expose MDA daily of being a fraud that seems to fit in-line with Eric Holders’ statement about a need to brainwash the American public about firearms.”

Breitbart Texas covered the testimony given by other women who testified on May 18, 2105 at the Capitol in a story entitled “Moms Demand Action: Bloomberg’s ‘Stepford Robots’ in Texas (with video).” This article also included a video published by OCT president and founder, C.J. Grisham. The video shows women from Moms Demand Action dutifully reading the same script over, and over, and over again. The videotape was taken from Texas legislative video archives.

Terry Holcomb, Executive Director of Texas Carry, another Second Amendment group, refers to the women as the “Bloomberg cult.” He called the women who testified at the Texas Senate Committee “sock puppets.” Holcomb told Breitbart Texas, “It’s sad, really. They are conditioned not to think for themselves. They have become so irrelevant that they are given a script by the Bloomberg heads and told to just read it.” “They had a printed form with a fill-in-the-blank for their name,” he said. Richard Briscoe, Legislative Director for OCT, told Breitbart Texas, “I had to contain my laughter when I could see that they had actually handwritten-in their name.”

Grisham and his group, Open Carry Texas, have been very politically active in the state. Breitbart Texas has written about their work at the Texas Legislature to promote both open carry and campus carry bills. As reported by Breitbart Texas in May 2015, Texas Open Carry also denounced a controversial open carry advocate who was calling for the arrest and hanging of Texas state elected officials who voted against an open carry bill.