A 12-year-old black girl from Waco, Texas, returned home from a school campout with a injury to her neck caused from a rope swing. The mother is asking if the injury to her daughter was racially motivated.

The unnamed girl returned home from an April 28 campout hosted by Live Oak Classical School, a private school the young girl attends. When she returned home, her mother, Sandy Rougely, observed an injury to her daughter’s neck that looked like it was caused by a rope.

“It looked like somebody had ripped her neck apart and stitched it back together,” Rougely, said in an interview with The Dallas Morning News. Rougely said her daughter attends the Live Oak Classical School which is mostly white and is located in a “flourishing part of downtown,” the Dallas newspaper reported.

She and her daughter claim the rope was intentionally put around her neck while the students were playing. The students – eight girls and fourteen boys – had been playing with a rope swing attached to a tree. 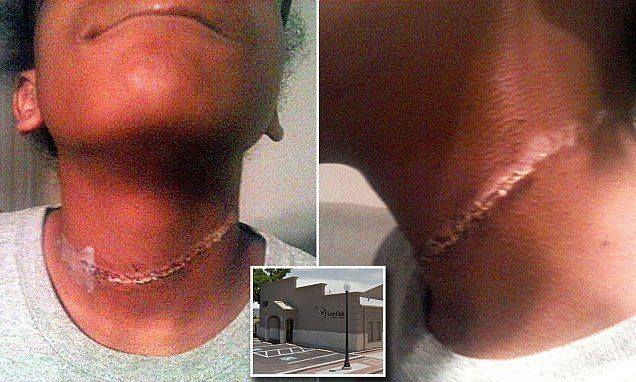 The school responded to the claim via an email to the Dallas newspaper. The school board member, Jeremy Counseller, wrote, “The student and some of her classmates were playing with a swing and an attached pull-rope on a field trip. The student received first aid treatment immediately after the accident by a parent chaperon who is also a physician, and she was able to enjoy the remainder of the field trip, which lasted through the next day. Live Oak takes the safety of its students seriously and is saddened that one of its family suffered an unfortunate accident and injury.”

Rougely has hired an attorney to address the matter with the school. Counseller’s email reportedly claims the attorney is trying to “exploit” the 100th anniversary “of the lynching of Jesse Washington in Waco.” He said the attorney asked the school to pay $2.7 million or he would make the allegations public, the Dallas Morning News reported.

On May 15, 1916, Washington, a 17-year-old black farmhand, was convicted for the rape and murder of a 53-year-old white woman, Lucy Fryer. Washington reportedly confessed to the crimes and was found guilty by a jury of twelve white men, according to the Texas State Historical Association’s recounting of the incident.

Before Washington could be removed from the courtroom by sheriff’s deputies, a group of white spectators grabbed him and dragged him outside. A mob of about 400 people had gathered outside the McClennan County Courthouse. Someone wrapped a chain around his neck and Washington was dragged down the street towards City Hall. Another group at that location had begun building a bonfire.

Washington was doused with coal oil and hoisted into the air over the pile of combustibles which was the set on fire. Two hours later, Washington’s body was removed from the hanging scene and placed into a cloth bag with was hung outside a blacksmith’s shop for public display. The burned body was later taken down and delivered to an undertaker for burial. No one was ever prosecuted in the case, the historical association reported.

Rougely claims that no one from the school contacted her about the injury. The school has offered no explanation for the lack of a phone call.

The girl’s attorney, Levi McCathern told the Dallas newspaper, “For Live Oak to bury their head in the sand and chalk this incident up to ‘kids being kids’ is irresponsible but, unfortunately, all too common. Their tone-deaf approach reflects an attitude that our client’s injury was not worth investigating or even informing her mother about.”

The Dallas Morning News reported the student’s version of the incident:

On April 28, the first day of the campout, all the kids played with a rope swing after a day of hiking and swimming, the girl said. One or two kids fit into a seat made of rope and the rest of the class pulled another rope to swing it like a pendulum in any direction.

The girl said she helped swing other kids and then she stopped to watch. She didn’t feel anything except the rope going around her neck from behind. The rope pulled against her neck. She fell to the ground and was tugged backward.

None of the students helped her, the girl said, so she removed the rope. Small pieces of rope were embedded in her neck.

She looked back and saw three boys — all of them white — who she said had been picking on her.

“Guys, did you do that on purpose?” the girl said she asked them.

“No. Why would we do that on purpose?” she said one of the boys responded.

But the girl told The News that she doesn’t understand how it could have been an accident. When the kids let go of the rope, it fell to the ground, she said.

“That’s why I think it was on purpose,” she said, fidgeting with her hands. “I think someone tried to tie it around my neck.”

The girl claims to have been bullied by several students for most of the school year. She and her mother claim the girl has been pushed, kicked and made fun of by her fellow classmates.

The Blanco County Sheriff’s Office, where the camping trip took place, reports that no one has brought the issue to their attention.

“I think there was prejudice at the root of all of this. I didn’t want to say it at first. I didn’t want to see it like this, in this way,” the mother concluded. “But as I go back and think about the different things that were going on and occurring in the school year, that’s all I can see. And nobody did anything about it.”

Adrian Patrick, a criminal defense litigator from Snellville, Georgia, responded to the report on his Facebook page. Patrick wrote, “HELL HAS NO FURY THAT WHAT HAVE STOPPED ME FROM WHOPPING OR SERIOUSLY INJURING EVERYONE ON THE TRIP. Black Men Let’s Get Some “I am Going to Whoop Your Ass First, then we will Discuss Later on Clearly Extreme Cases Like This,” that will cut some of this BS Out.”