Two Houston Police Department officers were hospitalized Tuesday after a suspected burglar reportedly shot each of them multiple times.

The Houston Chronicle notes that one identified officer, 24-year-old Ronnie Cortez, remains in critical but improving condition after a bullet lodged near his spine. Cortez’s fellow officer remains unnamed. He is reported to be awake and talking at this time.

A second officer received a non-life threatening wound to his foot. He is listed in stable condition.

One suspect was killed at the scene of the crime in southwest Houston while two others remain at large.

Officers were called to the scene of a burglary in progress at a home in southwest Houston. When officers arrived, the suspects were still in the area. A gunfight broke out between the suspected burglars and the officers, Fox 26’s Isiah Carey reported. Mayor Sylvester Turner told the Fox reporter one of the officers was shot multiple times.

KHOU CBS 11 reported the burglar involved the theft of multiple guns from a home. It is not known if the stole guns were used in the shootout. The injured officers were transported by ambulances that were escorted by Houston police vehicles.

HPD: Two officers injured after shooting in SW Houston. Police escorting ambulances as they are rushed to the hospital. pic.twitter.com/OHNq67aoeX 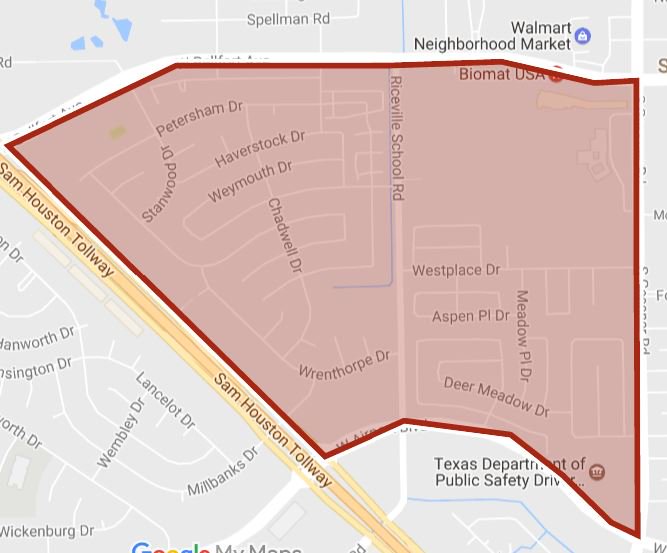 Map of area were a suspect or suspects are reported to be at large.

At least one suspect appears to still be at large. A manhunt is underway in the area of the shooting and school officials put several schools on lockdown as a precaution.

Another person told two officers they noticed that the door to a shed in their backyard was open, Acevedo said. As the officers opened the door to the shed, a man stepped out and began shooting. The officers returned fire, killing the gunmen.

This article will be updated with additional information upon confirmation.

Logan Churchwell contributed to this article. He is a founding editor of the Breitbart Texas team. You can follow him on Twitter @LCChurchwell. He also serves as the communications director for the Public Interest Legal Foundation.