Proposed drawings of the border wall promised by President Donald Trump include plans for bombproof concrete, solar panels, and a fiber optic tunnel detection system. Contractors expressed concern about attacks during the construction process and received numerous death threats for bidding on the project. 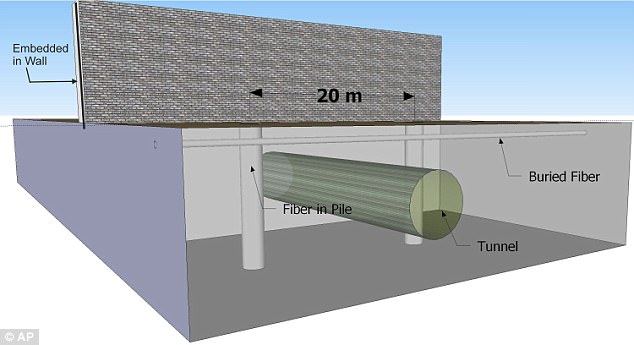 Wall design proposal from DarkPulse Technology, located in Arizona. The proposal calls for tunnel intrusion detection and a ballistic wall capable of surviving a tank round. (Image via AP)

Officials are expected to choose 4-10 companies to build a prototype section of wall to demonstrate their bid’s viability and effectiveness. Officials with knowledge of the plan spoke to the Daily Mail on condition of anonymity and said the prototypes would be built on a quarter-mile strip of federally owned land near San Diego.

The Trump Administration began seeking bids to build prototypes of the wall in February, Breitbart Texas reported. More than 300 companies quickly signed up to present proposals on how to take the President’s vision and promise to reality.

Expressing concern over security during the construction process, bidders asked how the government would respond to help their crews if they came under “hostile attack,” the Daily Mail reported. Another company expressed the desire to allow their workers to carry a sidearm for self-defense. They want the government to protect them and their workers from lawsuits if the use of deadly force became necessary.

The government plans to use Border Patrol agents and local police to establish “buffer zones” around the construction projects to ensure the safety of workers. However, the San Diego police and sheriff’s office said their protection would extend to peaceful, law-abiding protesters, and made no mention of protecting construction workers.

‘There will be a lot of different activity – protests, prayer vigils – on both sides of the wall,’ Enrique Morones, executive director of Border Angels, an open border advocacy group, told the Daily Mail. ‘We pray and hope that they’re peaceful.’

Breitbart Texas reported in March, that efforts to obtain private land along the Texas/Mexico border have already begun. Nearly 600 miles of the border is owned by private individuals, tribal nations, and various other governmental entities, according to the General Accounting Office.