Chicago officials announced Monday morning that police would be placed on high alert, with 12-hour shifts and expanded patrols throughout the city after the Magnificent Mile downtown was attacked by organized looters overnight.

Mayor Lori Lightfoot stopped short, however, of calling for the National Guard, which had been used to protect the downtown area after an initial wave of riots in late May. There was no mention of federal law enforcement, either.

(Update: At a subsequent press conference, Lightfoot, standing alongside Governor J.B. Pritzker, said that “both of us believe this is not an incident that requires the National Guard. … We do not need federal troops in Chicago. Period. Full stop.” She added that President Donald Trump should help by enacting “common-sense gun control.” If Trump wanted to help, she said, he should not “rattle the saber” but rather enact gun control, which she said would provide “real safety.”)

Superintendent David Brown told journalists at a press conference (carried live on the Facebook page of local ABC affiliate WLS-7 TV) that the looting was triggered by a shooting on the South Side of Chicago, when a 20-year-old suspect who was fleeing police fired at officers in pursuit. After officers returned fire and injured the suspect, who was hospitalized and is expected to survive, a crowd gathered.

“Tempers flared, fueled by misinformation as the afternoon led into evening,” Brown said, and posts on social media called for downtown Chicago to be looted.”

People are live-streaming themselves looting in Chicago

Other neighborhoods in the city were also looted, according to police and local news reports:

Though police mobilized in response, they were overwhelmed by “car caravans” that coordinated the looting. Police made 100 arrests and 13 officers were injured. Shots were fired at police, and a civilian and private security guard were hit by gunfire. 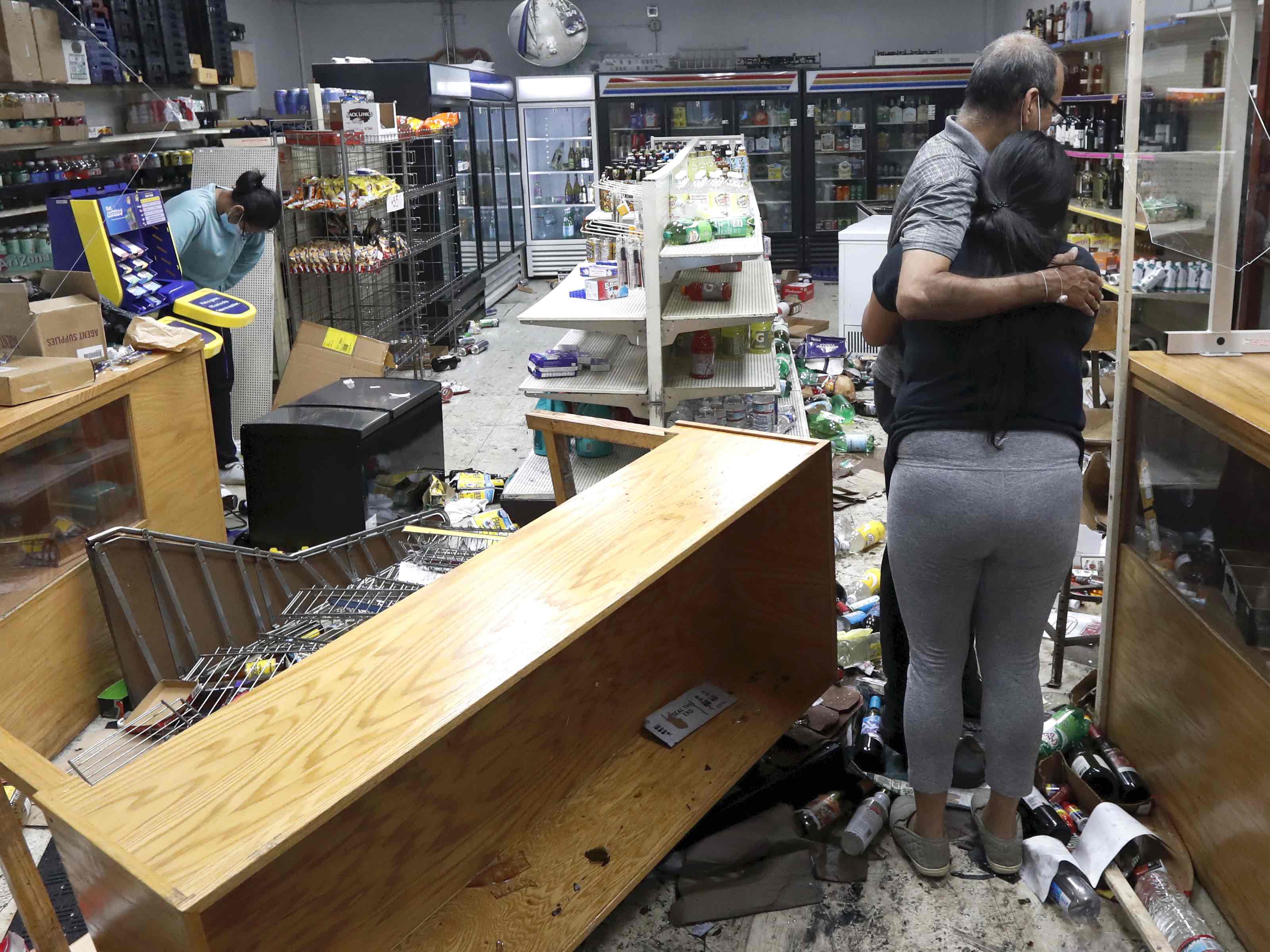 Yogi Dalal hugs his daughter Jigisha as his other daughter Kajal, left, bows her head at the family food and liquor store Monday, Aug. 10, 2020, after the family business was vandalized in Chicago. Chicago’s police commissioner says more than 100 people were arrested following a night of looting and unrest that left several officers injured and caused damage in the city’s upscale Magnificent Mile shopping district and other parts of the city. (AP Photo/Charles Rex Arbogast)

Brown said that the looters acted as if they believed there would be “no consequences,” and strongly suggested that the criminal justice system should impose harsher penalties on looters than it had done in the past. He noted that there had also been 31 shootings over the weekend, and three murders, and hundreds of guns recovered by Chicago police. He added that access to downtown Chicago would be restricted from 8:00 p.m. to 6:00 a.m. for the near future.

The mayor, who said the city had woken up “in shock,” angrily denounced the looting, which she said had no connection to legitimate protests. “This had nothing to do with legitimate, protected, First Amendment expression,” Lightfoot said.

Chicago and New York City crime numbers are way up. 67 people shot in Chicago, 13 killed. Shootings up significantly in NYC where people are demanding that @NYGovCuomo & @NYCMayor act now. Federal Government ready, willing and able to help, if asked!

Lightfoot initially responded angrily: “Under no circumstances will I allow Donald Trump’s troops to come to Chicago and terrorize our residents,” she tweeted. However, once it became clear that federal law enforcement deployed as part of Operation Legend would be supervised by the U.S Attorney, Lightfoot — a former federal prosecutor — relented.

Separately on Monday, President Trump suggested that the National Guard be used to restore order in Portland, Oregon:

Portland, which is out of control, should finally, after almost 3 months, bring in the National Guard. The Mayor and Governor are putting people’s lives at risk. They will be held responsible. The Guard is ready to act immediately. The Courthouse is secured by Homeland!

On Monday, Lightfoot placed the blame on judges and state and local prosecutors. “‘These people need to be held accountable, and not cycled through the system,” she said, urging criminal justice officials to act more assertively.

Other officials insisted that Chicago remained a “world-class city,” and that they would work to ensure that it remained so.

“We are not going to let our city be taken over by criminals and vigilantes,” Lightfoot said.