Thanksgiving is set to gobble up a smaller part of the family budget this year.

The cost of a traditional Thanksgiving feast for 10 will be $48.91, according to the American Farm Bureau’s annual survey of classic items found on the Thanksgiving Day dinner table. That’s up just one penny from last year’s average of $48.90.

Adjusted for inflation, however, the cost of Thanksgiving is actually down to $19.13, the lowest level in more than a decade. 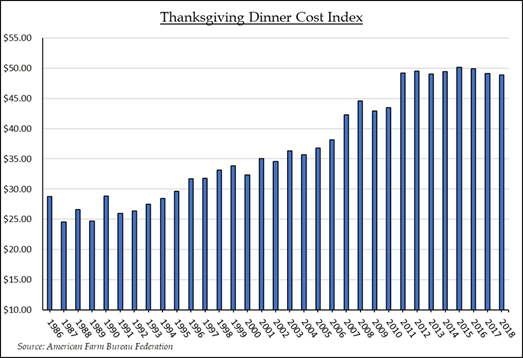 The Farm Bureau’s informal survey looks at prices of turkey, stuffing, sweet potatoes, rolls with butter, peas, cranberries, a veggie tray, pumpkin pie with whipped cream, and coffee and milk, all in quantities sufficient to serve a family of 10 with plenty for leftovers. Rises in the prices of dinner rolls, sweet potatoes, and milk somewhat offset the decline in the price of Turkey.

“While the broader economic message is that food inflation remains tame, the more important take-away is that the upcoming holiday gives us an opportunity to reflect and give thanks,” C.J. Lawrence portfolio adviser Terry Gardner said in a note to clients on Monday.