The House coronavirus spending bill allows roughly 500,000 college graduate visa-workers from China, India, and elsewhere to stay in their U.S. jobs, regardless of job losses by American graduates in the economic meltdown, according to a lobby group for H-1B workers.

The measure would prevent U.S. graduates from getting hundreds of thousands of college-grade jobs as the foreign workers’ visas expire — despite the colossal job losses being caused by China’s Wuhan virus.

The rule would even allow foreign H-1B workers who are fired to stay and compete for any jobs that come open during the epidemic.

“We have been working behind the scenes to address the immediate concerns of a lot of immigrants,” claimed the Facebook post by Immigration Voice, which was posted around 5.oo PM EST.  The group continued:

We take some solace to report, Immigration Voice has convinced the House to include a provision in the upcoming stimulus bill which says – in light of the indefinite closing of USCIS offices and U.S. embassies and consulates around the world, all existing lawful immigration statuses and EADs [Employment Authortization Documents] will be automatically extended for 1 year from the date the legislation is enacted. As per the current language, if you have an H4 EAD, it will be extended for a year. If you have an H-1B about to expire, it will be renewed and you can remain here even if furloughed until the crisis is over.

We need the Senate to agree to add the language into its stimulus in order for the doctors and other critical care workers we have in our community to be able to treat patients and go to work without fear of losing their status if they die. Please call your Senators and make sure they understand the importance of this provision and of the work you do.

Immigration Voice claims to be an independent group, but reportedly works closely with Compete America, an advocacy group formed by the nation’s major tech companies, nearly all of whom employees large blocs of Indian and Chinese visa-workers in jobs that could be filled by young American graduates. 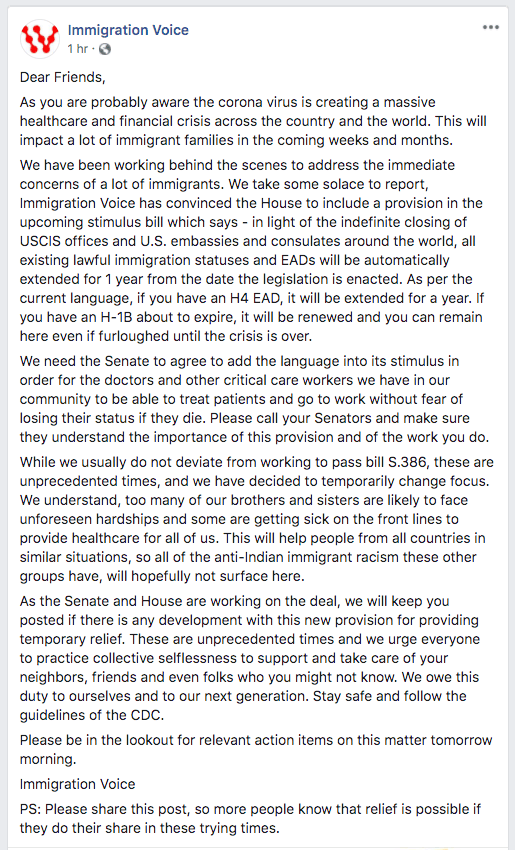 The coalition’s members include Facebook, Cisco Systems, the American Immigration Lawyers Association, Google, Microsoft, and the U.S. Chamber of Commerce.
The Immigration Voice claim is unproven, but it matches a new demand from FWD.us, an advocacy group of West Coast investors.

The group said the federal government should automatically extend visa permits for the nation’s population of foreign visa workers amid the coronavirus epidemic.

The list of “Policy Priorities … that Congress & Elected Officials must take,” was posted March 21 by the group’s director Todd Schulte, and it said:

We are in a global pandemic. The third week of March has seen more job loss than any other in our history and more businesses closed

… [the Government should] Automatically extend or renew visas or immigration benefits that are set to renew before the end of 2020.

A policy of automatic renewal would keep roughly 500,000 foreign college-level visa-workers on U.S. company payrolls by the end of 2020, even as many thousands of American graduates are losing jobs amid the economic meltdown caused by China’s Wuhan virus.

But if President Donald Trump used his emergency powers to not renew the work visas, he would open up several hundred thousand good jobs for the American college graduates who are likely to vote in 2020.

Meanwhile, agency officials are moving ahead with plans to import 85,000 new H-1B workers in 2020. Breitbart News asked the Department of Homeland Security if the agency is considering curbs on the 2020 award of H-1B visas because of the coronavirus disaster. “No changes at this time,” a spokesman responded on March 19.

Donald Trump's DHS has taken two steps to speed the delivery of 86,000 foreign graduates into American grads' jobs:
Even as many US white-collars are about to be laid off by US managers & Indian subcontractors.
Despite Trump's 2016 campaign promise. https://t.co/rsgZeHClla

The FWD.us lobby group was formed by Bill Gates, Mark Zuckerberg, and other West Coast investors to help push the “Gang of Eight” amnesty bill through Congress. The group was subsequently funded by a roster of investors and business chiefs, including top executives from Walmart, Google, and Microsoft. The investors strongly support mass immigration because it cuts companies’ labor costs and inflates consumer sales.

Since the populist election of Donald Trump, the group’s members have tried to defend their supply of visa workers, and of legal immigrant workers, consumers, and renters.

The group’s primary strategy is to shift the public debate away from visa-workers and legal immigration by pushing the media to provide sympathetic coverage to illegal workers, ‘DACA’ illegals, Central American migrants, New York illegals, and poor criminals.

For example, the group’s call for automatic visa-worker extensions is buried in a press release urging common-sense measures to provide economic support to jobless Americans and small companies:

We know that this crisis will disproportionately harm the most vulnerable in society, including those harmed and directly impacted by our broken immigration and criminal justice systems.

Alongside the call for automatic renewal of visa workers, the investors’ group is also calling for “immediate relief … [from] immigration enforcement,” the release of many prisoners, and the renewal of work-permits for the roughly 600,000 migrants covered by President Barack Obama’s “Deferred Action for Childhood Arrivals’ quasi-amnesty.

At home? Want to tell Congress what should be in this package? Go to https://t.co/mC34ZjwFZX https://t.co/H6VzGF5kEC

A Breitbart News study showed the population of white-collar visas workers to be roughly 1.5 million. At least one-third of those workers — or 500,000 — have their visa status renewed each year

Two-thirds of the 1.5 million visa workers are Indians, while the Chinese workers providing the second-largest group.

Company executives and “Human Resources” managers use the H-1B program to procure and promote blocs of compliant, disposable, lower-skill foreign college graduates for the many good jobs which are sought by qualified and eager U.S. graduates and mid-career professionals.

The blocs of H-1B workers sometimes cost more than American professionals, partly because they are often less productive and innovative than American graduates.

But U.S. managers prefer visa workers because they can be hired and fired as ‘gig workers’ via networks of coordinating subcontractors, such as Infosys, Tata, HCL, and other Indian companies.

Also, the federal government rarely enforces routine workplace laws in H-1B workplaces. The government’s refusal to enforce the laws means the H-1Bs can be hired, fired, and abused by their bosses, most of whom are Indians who grew up in Indians’ own culture. These abuses include workplace intimidation, sexual discrimination, and unpaid overtime hours, Americans tell Breitbart News.

The government inaction in H-1B workplaces also strips American graduates of routine workplace protections, including protections against commonplace discrimination because of their nationality.

DoJ/EEOC do nothing as US & Indian execs trade US jobs to Indian #H1B workers, cutting Americans out of careers, homes & families.
This trade choked innovation in Silicon-V, slammed insurance & banking. #SenMikeLee & #S386 will expand it to healthcare https://t.co/qoENwyO6X7

Many brand-name American companies in the software, Internet, insurance sectors rely on these visa workers. Numerous American graduates report that native-born Americans are a rarity in most Silicon Valley companies, as well as in insurance and banking industries on both coasts.

Each April, 85,000 H-1B visas are awarded to U.S. and Indian companies via a rushed application and lottery process managed by the U.S. Citizenship and Immigration Services agency. An additional “cap-exempt” 15,000 H-1Bs are awarded throughout the year to non-profit employers at universities, research laboratories, and hospitals. Cap-exempt employers are allowed to hire as many H-1Bs as they wish.

The current head of DHS, Chad Wolf, formerly served as a lobbyist for the Indian-based outsourcing industry. The group’s mix of Indian and U.S. companies use the H-1B program to extract salaries and wealth from the U.S. college-graduate class and to split the gains among both countries’ executives and investors, as well as with the visa workers.

Meanwhile, business groups are trying to expand the H-1B program. For example, activists are citing the coronavirus as an excuse for Congress to allow investors to hire an unlimited number of foreign graduates for jobs in the healthcare sector. Sen. Mike Lee (R-Utah) is also pushing his S.386 bill to reward additional Indians if they take jobs from American graduates.

Trump’s failure to set curbs on the H-1B program has angered many of the swing-voting university graduates who supported him in 2016. In March 2016, after much zig-zagging, Trump declared:

The H-1B program is neither high-skilled nor immigration: these are temporary foreign workers, imported from abroad, for the explicit purpose of substituting for American workers at lower pay. I remain totally committed to eliminating rampant, widespread H-1B abuse and ending outrageous practices such as those that occurred at Disney in Florida when Americans were forced to train their foreign replacements. I will end forever the use of the H-1B as a cheap labor program, and institute an absolute requirement to hire American workers for every visa and immigration program. No exceptions.

In February 2020, a U.S. judge struck down the token H-1B curbs set by USCIS managers since Trump’s election.

Immigration reformers are calling for the cancellation of the 2020 H-1B awards amid the economic crash.

American professionals have organized to lobby against the H-1B program via the American Workers Coalition, U.S. TechWorkers, and ProUSworkers. The new TechsUnite.US site was created to help U.S. graduates anonymously collaborate while shielded by encryption.

In turn, these groups are backed up by a few sites that track the scale and location of the outsourcing industry in each legislator’s district. The sites include SAITJ.org and H1BFacts.com. “The scope of this thing is really unbelievable,” said one researcher.

The federal USCIS agency provides some data, including data about the uncapped OPT program, sometimes called the “Mini-H-1B.”

The economic crash means the federal government must stop the inflow of H-1B workers so that sidelined American professionals can get jobs, a Florida-based American computer expert told Breibart News March 19.

“Fiona” earned two college degrees in the early 2000s after she left the real estate industry following the 2007 collapse. Since then, she has worked a series of contract jobs, most recently at a seven-month stint at an insurance company run by an imported workforce of H-1B workers from India. She said her job ended when she was forced out by Indian managers, in part, because of her excellent performance reviews. She is in her 50s, has been unemployed for several months, and fears recruiters will blackball her if she speaks on the record.

She told Breitbart News, “I’m not eligible for unemployment. So I have lived off my savings, and I’m living with my son. I’m still applying for jobs, but they’re very few and far between. I can’t relocate again because when they cut my contract job, I had to cut my lease off early, so now, my credit is bad. My lease history is bad. I can’t go and take the risks that I did before. I was getting ready to go and look for a minimum wage job until this coronavirus came here, you know. Come next month, you know what? I can’t pay my bills because I’ve gone for like eight months on my savings.”

One traveler from China directly about 30 people with coronavirus in the Seattle area during January and Feb.
No report yet on far those infections have spread onwards.
This may be one unforeseen cost of the tech sector's preference for visa-workers. https://t.co/MRVZ1HLGT6