“That is a powerful position to be in,” said Kevin Lynn, founder of U.S. Tech Workers. “What he can do is turn on and turn off the flow of [visa worker] labor into these companies … This gives him an awful lot of control.”

“If he were smart, he would think of that,” said Marie Larson, one of the co-founders of American Workers Coalition. The coalition advocates against the various visa workers programs which provide roughly 1.3 million foreign employees for Fortune 500 companies, including the tech sector. But, she added, “Our main issue is the [impact of the] foreign worker programs. … [and] he’s really skirting that issue.”

Multiple websites show how Google, Facebook, and Twitter use the visa worker pipelines to fill up a wide range of starter and mid-career jobs with compliant foreigners instead of innovative American professionals.

But the President has legal authority who can enter the country, so he can disrupt or cut that pipeline. He can use his bully pulpit to showcase the unpopularity of the many visa programs during the 2020 election.

The major Valley executives usually pay good wages to their foreign H-1Bs because they prefer foreign workers for management reasons:

The foreign workers are compliant and hard-working because they are largely unprotected by U.S. workplace laws. For example, they can be deported to their poor homelands by a manager’s signature.

Several major Valley companies were sued in the 2000s for operating an illegal “no-poaching” policy, in which the companies protected their secrets and suppressed salaries by promising to not hire employees from each other. The H-1B workforce allows executives to achieve that goal legally because the H-1Bs are locked into their jobs as they wait years to get employer-sponsored green cards.

U.S. executives use the H-IBs to avoid creating a U.S. workforce of innovative American graduates who argue back, quit, and set up rival companies.

The vast majority of the Valley’s incoming H-1Bs are slotted into routine roles that can easily be accomplished by U.S. graduates, according to Indian H-1Bs and U.S. managers who have spoken to Breitbart News. “There are ordinary routine workers to displace Americans; That is the kind of worker they are getting — so no more innovation for us,” said Lynn.

Trump should use his control of the Valley’s worker pipeline “to create labor practices that force employers to begin reinvesting in their American workforces,” Lynn said. Numerous polls show that “Hire American” policy is very popular, he added.

The company hiring is shown at the MyVisaJobs.com site.

For example,  Twitter asked for permission to import 830 H-1B workers from 2017 to 2019, at a wage of roughly $150,000 per person. Officials at the Department of Homeland Security rejected only eight of those requests.

The MyVisaJobs site says that the company is asking for another 161 workers in 2020, despite the massive American unemployment caused by China’s coronavirus. 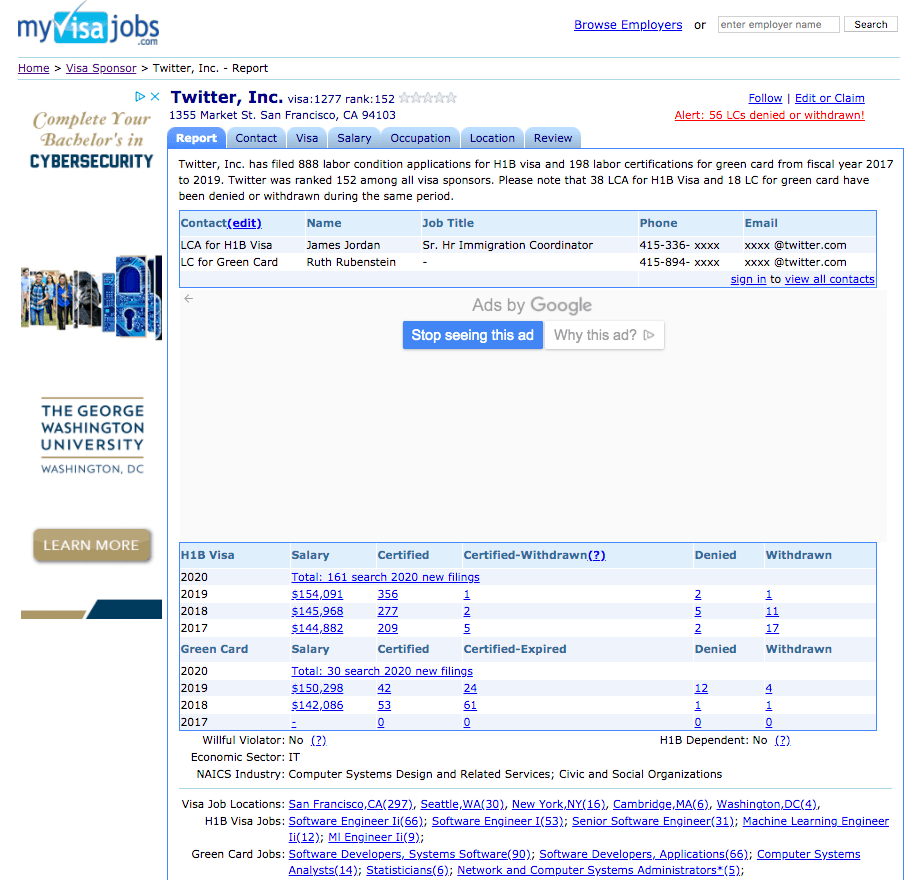 Some of Twitter’s U.S.-based foreign workers have caused problems for conservatives and the GOP. In January 2018, for example, Project Veritas recorded Pranay Singh, a direct messaging engineer at Twitter. boasting that conservative accounts are targeted en-masse:

Just go to a random tweet, and just look at the followers. They’ll all be like, guns, God, ‘Merica, like, and with the American flag and, like, the cross… Like, who says that? Who talks like that? It’s for sure a bot. You just delete them, but, like, the problem is there are hundreds of thousands of them, so you got to, like, write algorithms, that do it for you.

I would say majority of it are for Republicans, because they’re all from Russia and they wanted Trump to win, so yeah.

The MyVisaJobs page shows that Google asked for 14,300 foreign workers in place of Americans from 2017 to 2019 — even when company executives were free to hire some of the many sidelined or unemployed American graduates. Google even promised to pay roughly $140,000 per person — or far above the wage that young American graduates would happily accept. 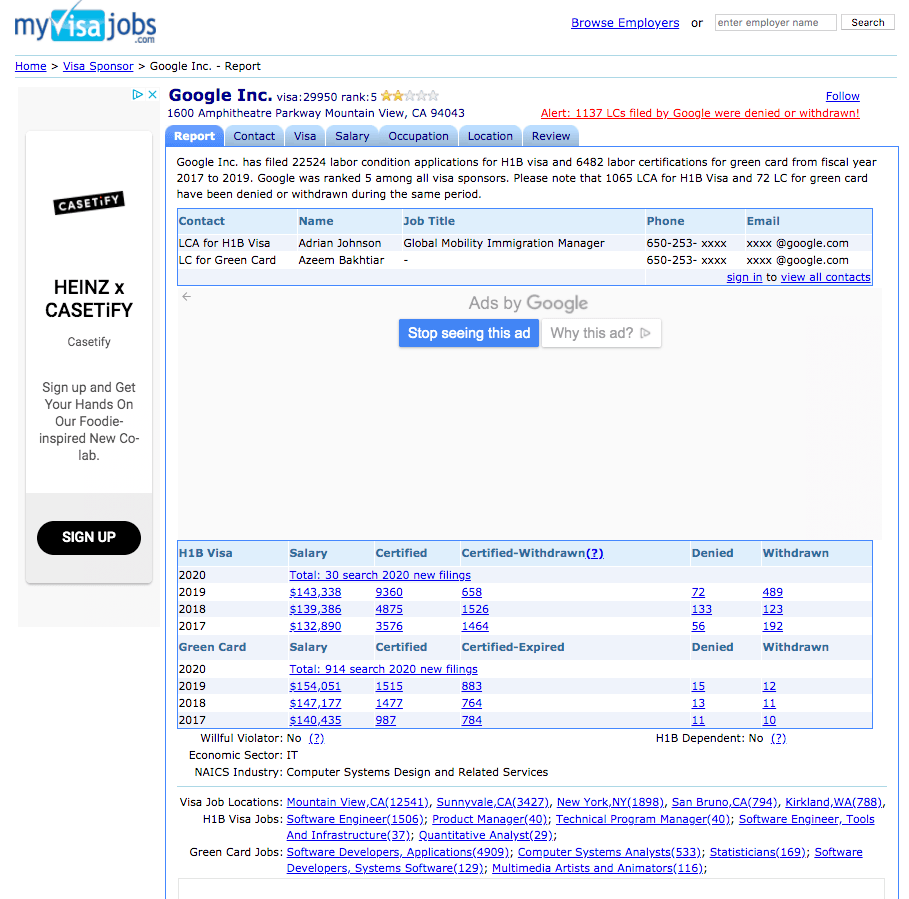 Outside Silicon Valley, Fortune 500 companies also use the H-1B inflow to force down salaries paid to technology workers. The wage suppression is accomplished by flooding the labor market with software graduates, via a plethora of subcontractors who loudly compete for contracts and sometimes quietly cooperate to skim salaries from gig-worker graduates.

Please read @NeilMunroDC 's latest before you assume (as I once did) that H-1B "guestworkers" are all super-skilled foreign tech whizzes doing work Americans can't do. I'm sure some are, but most …. https://t.co/MRvndFDXsQ