“The unemployment rate is below 5% for the first time in 15 months … Employers have to compete for workers, driving wages UP!,” tweeted Ron Klain, Biden’s powerful chief of staff and long-time aide.

The unemployment rate is below 5% for the first time in 15 months. Many people quit their jobs … to take better jobs, with higher pay. Employers have to compete for workers, driving wages UP! https://t.co/iqeJd5jgGM

“I think they actually believe that their immigration policies have no downside for American workers,” said Mark Krikorian, director of the Center for Immigration Studies. He continued:

People believe all kinds of ludicrous things, and it’s in their interest to believe the absurdity that letting in hundreds of thousands of additional illegal aliens on top of the million legal immigrants has no negative consequences for less-skilled American workers. I think they actually believe it … [and] I think they’re lying to themselves rather than knowingly plotting a false communication strategy.

Klain’s boss, Joe Biden, has applauded the goal of a “tight labor market” that exists when there are many more job openings than willing workers.

In a May 28 speech, Biden explained his support for the long-standing and very popular goal of wage growth in a tight labor market:

Well, wait until you see what happens when employers have to compete for workers.  Companies like McDonald’s, Home Depot, Bank of America, and others — what do they have to do?  They have to raise wages to attract workers.  That’s the way it’s supposed to be.

Biden’s description of a tight labor market is backed by a report from Goldman Sachs — which also credits President Donald Trump’s 2020 curbs on migration for rising wages in 2021.

“Early retirements, the 2020 [legal] immigration collapse, and lingering mismatch will likely mean that a 3.5% unemployment rate—our forecast for end-2022—would imply a tighter labor market than it did last cycle,” said the company’s October 4 report. “As a result, we expect wage growth will remain at about 3¾% in 2022,” the report predicts. 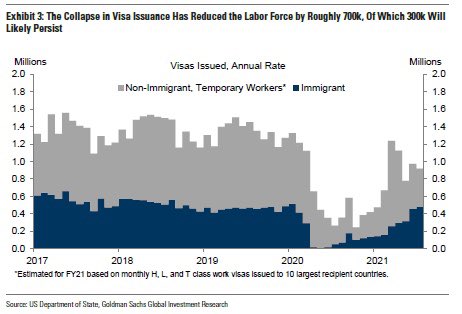 However, Goldman’s public report does not mention Mayorkas’ss highly visible migration, which is likely to deliver one million extra workers by the end of 2021. Instead it predicts a one million shortfall in willing workers:

We estimate that the current labor shortage will ease considerably this fall—especially following the expiration of federal UI benefits programs in September—but still project an over 1mn [million] hit to the labor force from early retirees and other labor force exits at end-2022.

On October 12, for example, Mayorkas told employers that he would not enforce the popular laws against the hiring of illegal workers unless the CEOs also underpaid or abused their foreign workers.

Since January, Mayorkas has processed several hundred thousand legal immigrants and revived multiple blue-collar and myriad white-collar visa worker programs that were shut down by former President Donald Trump. He has also allowed at least 400,000 working-age migrants through the southern border and stood by as at least 400,000 working-age migrants sneaked past the border agents who now process Mayorkas’s economic migrants.

Mayorkas has also welcomed roughly 150,000 young migrants who slip in via the “Unaccompanied Alien Children” loophole. A clear majority of these migrants are male and claim to be 16 or 17, and are coming to the United States to get jobs.

Looming over the many problems with this cramped and temporary form of integration is the debt that most of these young people have incurred to bring them to the promised land. The family of one young woman I interviewed for this article paid $18,000 to the coyotes who escorted her across two countries to get to the US; once delivered, she was responsible for paying them back. In Victoria’s case, her uncle put her to work in his restaurant the day after she arrived. Migrating teenagers are expected to contribute financially from the benefits of the opportunity afforded them, and their worth is measured, in part, by how they suffer the loss of family, community, and country without complaint.

A 2020 ProPublica investigation of child labor in Illinois found unaccompanied minors among teenage migrants working in factories and food-processing plants, in clear violation of the program’s stated policy.

The legal immigrant and illegal migrant inflows have inflated the new 2021 labor supply by almost 50 percent, assuming that roughly 3.5 million Americans have joined the labor force since January.

Biden’s pro-corporate inflation of the labor supply is ignored by establishment media outlets. But foreigners recognize the administration’s welcome and are walking through the border to accept Biden’s offer of Americans’ lower-wage jobs:

Meanwhile, monetary inflation has risen to five percent, effectively wiping out many of the 5 percent pay raises that Klain boasted about.

The prices of full-service [restaurant] meals are up 5.2 percent compared with a year ago, while prices of limited-service meals—fast food places—are up 6.7 percent.

For many years, a wide variety of pollsters have shown deep and broad opposition to labor migration and the inflow of temporary contract workers into jobs sought by young U.S. graduates. This pocketbook opposition is multiracial, cross-sex, non-racist, class-based, bipartisan,  rational, persistent, and recognizes the solidarity that Americans owe to each other.

Nationwide, migration is deeply unpopular because of its economic impact. It damages ordinary Americans’ career opportunities, cuts their wages, raises their rents, curbs their productivity, shrinks their political clout, widens regional wealth gaps, and wrecks their democratic, equality-promoting civic culture. It also pushes people towards addiction, and minimize the incentive for employers to help them break them out:

Real life #Halloween in the streets of #SanFrancisco brought to you by ⁦@SFDemocrats⁩ and #Fentanyl. #USA pic.twitter.com/95CJuVie3J