Lunches for school children on Wednesday are reportedly being impacted throughout the nation by President Biden’s supply chain crisis, forcing children to conserve forks and spoons at schools.

“We have the cashiers giving out one per student,” said Lauren Weyand, Craven County nutrition director in North Carolina, about the lack of forks and spoons at available to children at lunch. WITN NBC reported the school system “assures” each student they will not have to eat with their hands.

“I’m kind of just falling into place and kind of making sure that I just have what I need and I don’t end up with two spoons and somebody else doesn’t have something,” Antonio Mitchell, a New Bern High School senior, said.

Weyand added that the county school district is also having difficulty purchasing containers and five-compartment-trays. 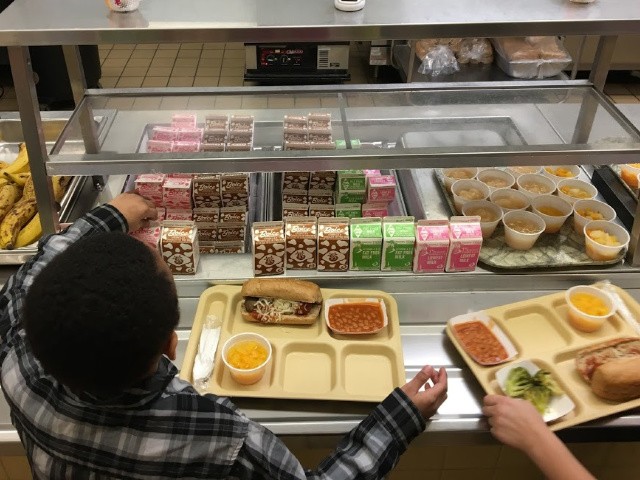 The supply chain crisis is also threatening the children’s nutrition. “Before we did not have syrup, we just got syrup a couple days ago,” Mitchell told the outlet.

The school district has begun managing the food shortage by going directly to the manufacturers to buy food instead of working through a distributer. “It has forced us to think outside of the box,” Weyand said, noting that the county is purchasing meat processors and growers to circumvent the Biden’s supply chain.

In New Haven, Connecticut, the “food supply-chain shortage could affect thousands of meals served daily by one of the state’s largest school districts,” the New Haven Register reported.

The school district’s Executive Director for food services, Gail Cairns-Sharry, told the school board’s finance committee this week they are facing massive food shortages. “We are really running into some challenges,” Cairns-Sharry said.

School systems are working through supply chain issues that have caused them to cut down on giving out certain materials. https://t.co/r8Lp1Dtn3u

Apparently the nation wide supply chain shortage has made it very difficult for Cairns-Sharry to obtain meat for the school children. Last week the meat supplier canceled the school district’s order.

“The hamburger vendor is Tyson Foods, K12 Division, according to Justin Harmon, the district spokesman,” the Register reported. “District officials say the company is not going to produce the hamburgers ordered.”

The CEO and founder of Saffron Road, a producer of frozen and shelf-stable meals, told the Seattle Times that food shortages are due to people “hoarding” food. “People are hoarding [food],” Adnan Durrani said. “What I think you’ll see over the next six months, all prices will go higher.”

More than a year and a half after the coronavirus pandemic upended daily life, the supply of basic goods at U.S. grocery stores and restaurants is once again falling victim to intermittent shortages and delays. https://t.co/9V4jllGtDB

Food prices have risen in October. Albertsons grocery stores reportedly told analysts on Monday the supermarket expects to raise prices on food items. Chief Executive Officer Vivek Sankaran told the Wall Street Journal items that would normally be stocked are not, increasing the cost of the items.

“On any given day, something is out of stock,” Sankaran said about the grocer passing through the costs increases to American workers and families.

The food shortage is driven by the supply chain crisis, which likely stems from a lack of truckers to carry away freight from ports. The full ports are preventing ships from offloading their cargo, further delaying their return voyage to Asia to pick up more freight.

But even if there were enough truck drivers to move the freight to storage facilities, warehouses are full and increasingly more expensive.