Top GOP legislators are facing pressure from fellow Republicans to remove establishment Rep. John Katko from the top GOP slot in the House’s Homeland Security Committee, according to Punchbowl News.

The GOP leadership is bracing for rank-and-file lawmakers to attempt to strip committee assignments from the 13 Republican lawmakers who voted for the 1 trillion bipartisan infrastructure bill. Several of these lawmakers are also ranking members — top Republicans on committees — and these could be at risk, too.

Much of the anger is directed at John Katko (R-NY), who voted early for the legislation. Katko is the ranking member of the Homeland Security Committee. Katko told multiple lawmakers on House floor that he had seen Rep Jim Banks (R-Ind) on television talking about the infrastructure bill, and he was voted early

Katko plays a central role in the GOP’s internal politics over migration policy — and his critics do not think he will try to win the external electoral battle over migration.

“Katko is unfit to serve in an immigration leadership position with his track record of being bought and paid for by corporate donors and his implicit support of amnesty,” a source told Breitbart News. “Having Katko as chairman is no different than if Democrats were still in charge of the committee,” the source added.

Katko arrived in 2015, and became the ranking member on the Homeland Security Committee in December 2020.

That ranking membership helped him get the chairmanship of the American Security Task Force which was created to craft a winning immigration message for the 2022 election. That is a critical and difficult job, in part, because Democrats will try to sway swing-voters from listening to GOP’s criticism of Democrats’ border policies. 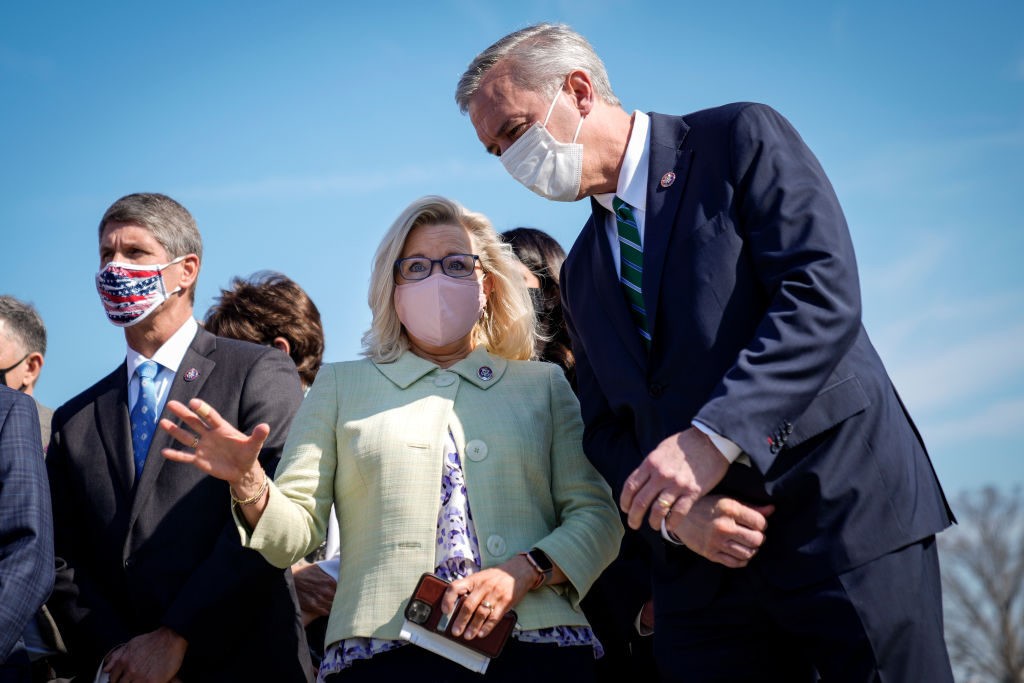 Democrats have the power to reshape Katko’s blue-leaning district to favor a formal Democratic takeover. “Democrats fully control the congressional redistricting process,” according to fivethirtyeight.com. “If the [pending] Democratic map is adopted, it could force Katko, R-Camillus, to run against Tenney, R-New Hartford, in a Republican primary election next year,” Syracuse.com reported in September.

However, Democrats are offering to negotiate, the Syracuse.com noted:

The commission’s chairman, David Imamura, said the draft maps should be viewed as the beginning of a conversation. “They are simply first drafts,” Imamura said. “I will be the first to say that these plans are imperfect, and that based on public input they can, should, and will change.”

Katko is also facing pressure from deep-pocketed business groups who can help or hurt his chances of surviving the redistricting process. For example, in March, business-backed pro-amnesty groups help to spend $200,000 on a pro-migration campaign in Katko’s district. In 2020, he fended off a Democratic challenger with the help of $1.46 million in campaign ads from the Congressional Leadership Fund, an investor funded, pro-migration group that supports pro-migration candidates.

In March, Katko showed his cards when he joined 29 GOP legislators to vote for a Democrat-run farmworker amnesty.

The amnesty would push many American farmworkers out of jobs, push billions of dollars of payroll from rural towns to foreign countries, slash investment in wealth-creating farm machinery, divert wealth from farm states to coastal investors, and create another pipeline of immigrant voters for the Democratic Party.

As Katko struggles to survive 2022, Democrats are defending him. On November 9, for example, President Joe Biden told a Democratic meeting:

You know, the Republicans who voted in the House of Representatives for the infrastructure bill — you’ve seen in the press the reports that the other Republicans are trying to strip them of their standing in their Congress. If they’re a chairman of a committee, they’re trying to strip them of that chairmanship. I’ve never seen it like this before. It’s got to stop for the sake of America. ….[They] are now being threatened with their chairmanships. It’s just not right. We’re going to change it though.

Amid these contradictory pressures, Katko has minimized the GOP’s campaign promises on immigration, despite his chairmanship of the caucus’ campaign-themed American Security Task Force.

In July, Breitbart reported on Katko’s proposed 2022 promise — the passage of the Border Security for America Act of 2021:

“From finishing the border wall system to modernizing technology and bolstering border staffing, this legislation tackles key shortcomings and weaknesses,” Katko said in a statement.

“That’s all there is to it?” responded Mark Krikorian, director of the Center for Immigration Studies, who noted the bill does not include any language to close up legal loopholes in the border, such as catch-and-release rules:

“It is pretty weak. I’m not against it, but it will not address the border crisis. The border crisis is primarily driven by loopholes in the law that everybody is aware of, not by a lack of equipment or personnel. I don’t dispute there almost certainly are personnel and equipment needs, but that’s not the main problem here.”

Katko has minimized the role of pocketbook issues — jobs, wages, housing — in his migration platform for 2022, despite his own district’s loss of jobs and wealth to immigration-inflated New York.

“The pocketbook issues on immigration is what delivers voters, and if any any member of the Republican party that wants to stay quiet on that front to not upset their corporate donors, they are sending a clear signal that they care more about the donor class than they do their actual constituents,” one Katko critic said.

In late October, for example, he warned about terrorists walking through the southern border: “We know a number of terrorists have been caught at the border … We’re not allowed to disclose [the number] publicly.”

In hearings, Katko has also been solicitous of the Biden’s border chief. Alejandro Mayorkas. In a June 17 hearing, for example, he avoided asking about Mayorkas’ bureaucratic maneuvers to admit more economic migrants, and instead asked:

If [diversity] is one of your core values and one of your core priorities — diversity — why is isn’t there any funding for it in the budget? … Do you believe [the Cybersecurity and Infrastructure Security Agency] should be up to about a $5 billion agency in the not too distant future?  … Is it correct that there’s not additional Border Patrol agents scheduled [to be hired] in this budget request? … Do you ever go to a crime scene so you can get your head to see what happened with the crime so [suspects] could then be prosecuted?

Katko’s passivity comes as the Democrats threaten the GOP with a draft reconciliation bill that includes a mass amnesty and a rapid increase in migration. That bill would also deeply damage American graduates, force up housing prices nationwide, and also divert investment, jobs and wealth away from the GOP’s heartland states towards the Democrats’ big coastal states.

On November 5, Katko defended his decision to vote for Biden’s $1.2 trillion infrastructure bill by declaring his opposition to Biden’s reconciliation bill —  and he did not mention any opposition to the bill’s huge changes to legal immigration:

Democrats also made history by beginning the process to pass a separate multi-trillion dollar spending [reconciliation] package. With this vote tonight, Democrats have paved the way to pass a far-left wish list that will raise taxes, implement radical Green New Deal policies, make our economy less competitive, and exacerbate the skyrocketing inflation that is already hurting Central New York families.

The result of Katko’s low-profile stance is that only 48 percent of Americans think the GOP would do a better job on border security than the Democrats, according to an October poll of 1,000 Americans by NBC. Twelve percent of voters say the two parties are similar, and 17 percent says that neither party can do the job, according to the NBC data. The Democrats’ border policies are rated favorably by just 21 percent.

The polling failure comes even though Biden’s Democrats have opened the southern border to roughly 1 million illegal migrants in 2021 — and show little intention of reducing the inflow in 2022.

And still, on the main drag in Del Rio, Texas, the catch-and-release busing of freshly legalized illegal migrants to all four corners of America goes on and on and on relentlessly as enabled and facilitated by the Joe Biden administration. vid care of a citizen the other day… pic.twitter.com/k2lqzR4rez

The GOP only gets a 48 percent score even though Harvard Harris reported that 71 percent of 1,578 registered voters want the migrants to be turned back to Mexico.

In October, GOP leader Rep. Kevin McCarthy stepped in offer a stronger message: “We’ll return to the policies that made our border secure,” he told a press conference.

This stronger pitch is a step towards the policy pushed by Rep. Jim Banks (R-IN). He posted a policy memo on April 14 which urged Republicans to defend working Americans from the government’s extraction-migration policies;

The House GOP’s 2022 campaign committee has acknowledged that a clear majority of Americans oppose uncapped legal migration and hiring of foreign workers by U.S. corporations.

Fifty-three percent of voters, and 55 percent of independents, oppose “removing federal limits on the number of foreign workers who can be hired by corporations to do jobs based in the United States,” said a summary of a November 2-4 poll of 800 likely voters by the National Republican Congressional Committee (NRCC).

You’re talking about immigration being a kitchen table issue and how it impacts [voters]. The bottom line is that polling showed us this is still a very potent issue for Americans. This is something that, while some people would want to write it off, this is something that Americans care about, and this administration has completely punted on the immigration issue — and talk about incompetence!

Surveys show that a pocketbook message on immigration can win support from Democratic voters. 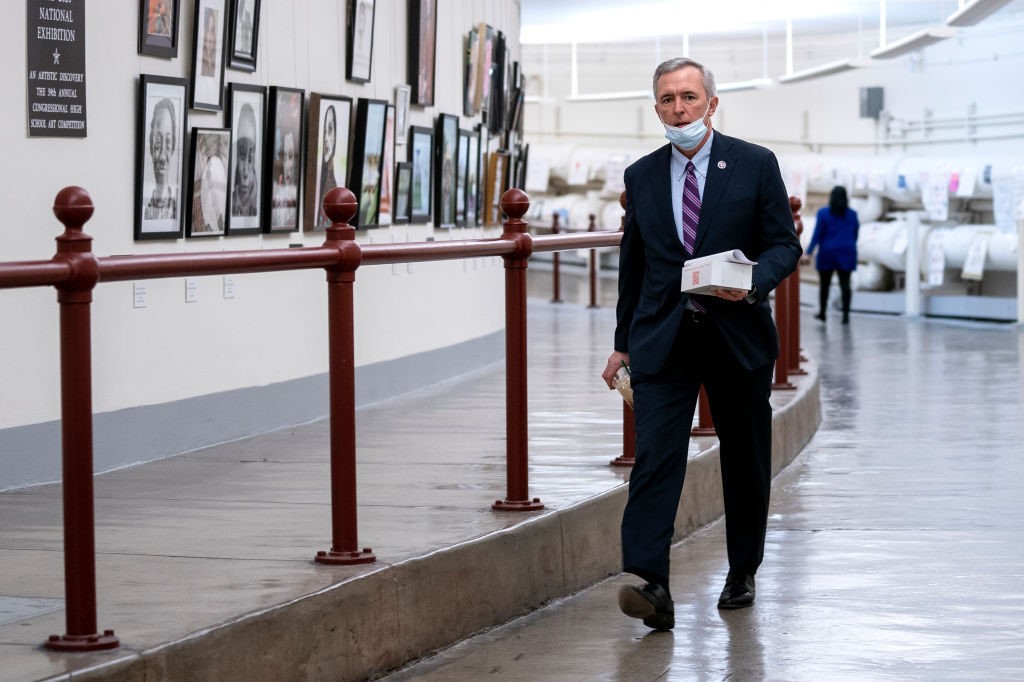 For example, roughly one-in-six of Biden’s 2020 voters say they strongly agree that illegal migration will drive up their housing prices, cut their wages, or take their jobs, according to an extensive survey sponsored by the University of Virginia’s Democrat-leaning Center for Politics.

The survey spotlighted “Concerned Moms,” a broad group of Democratic-leaning swing voters who “are worried about higher housing costs, taxes, and potential negative employment effects due to immigration.”

For many years, a wide variety of pollsters have shown deep and broad opposition to labor migration and the inflow of temporary contract workers into jobs sought by young U.S. graduates. This opposition is multiracial, cross-sex, non-racist, class-based, bipartisan, rational, persistent, attractive to Democratic voters, and recognizes the solidarity Americans owe to each other.