The National Science Teachers Association (NSTA) has published a guide to “gender-inclusive biology,” which erases the terms “men” and “women” and provides school administrators ways to dismiss parents’ concerns.

The guide, titled “Gender-Inclusive Biology: A framework in action,” provides teachers “practical strategies for teaching about gender, sex, and sexuality in biology.” Among the guiding principles is a pronounced belief in “affirmation” and “anti-oppression.” “Sex verification in sports” is one of the practices that is listed as an example of oppression.

The guide includes a section titled “Building Continuity in Gendered Language.” The section explicitly tells teachers to avoid terms like “mother,” instructing them to substitute it for “gestational parent.” The word “males” is also disposed of in favor of “XY individuals.”

The section also complains that “Many medical and scientific statistics only use data from white, cisgender, European populations.” 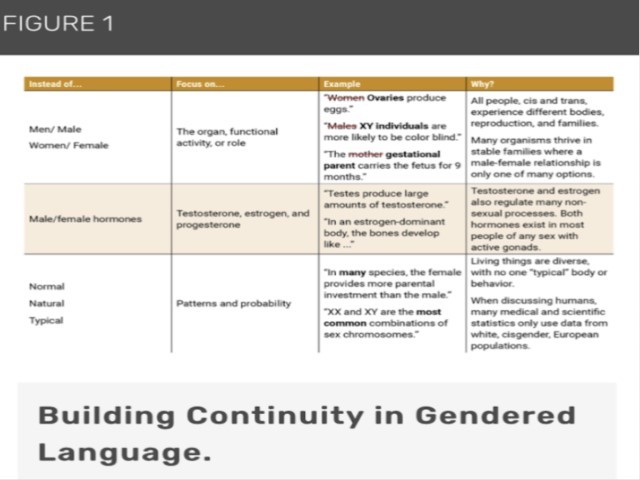 Under the “Anti-Oppression” subtitle, the guide remarks that one of the goals of a gender-inclusive biology curriculum is to identify “places where societal power and oppression impact specific marginalized gender groups, including transgender, intersex, and gender non-conforming people.”

The guide also instructs teachers to introduce their students to terms such as “transgender,” “gender identity,” and “sex assigned at birth.” Teachers are also told to learn their students’ gender pronouns on the first day of school and to “highlight narratives of strength among marginalized groups.”

Another diagram in the guide does away with depictions of men and women in an attempt to be “inclusive and universal,” instead referring to them as “people with ovaries” and “people with testes” respectively. 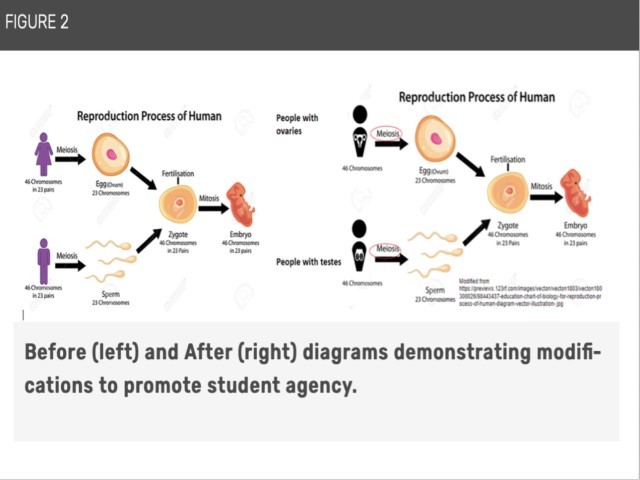 “Before and after diagrams demonstrating modifications” (screenshot)

The NSTA even claims that there is “no official, accurate, and inclusive name in the English language” for a mother and a father, who they refer to as “the two individuals who created the egg and sperm that became a new person.”

The guide encourages teachers to have their students come up with an entirely new name for the word “parents,” such as “gene-givers” or “biological life transmitters.”

The NSTA also provides teachers with a guide to dismissing the objections of parents who are not comfortable with their children being taught the leftwing view of sex and gender. When faced with the objection that this curriculum “isn’t age-appropriate,” the NSTA argues “many young people are developing and coming to terms with their gender identity and sexuality during high school and even before.”