“Just look at the Old Testament. They didn’t go out with the army first. They sent the musicians out.” ~ Michael W. Smith

One year ago my good friend & songmate, BigDawg, and I decided to launch BigDawg Music Mafia to showcase the many creative ways our fellow patriots are getting engaged in the pop culture revolution, speaking truth to power through their God-given talents (songs, art, blogs, books, photography, poems, radio shows, film, humor, acting, etc).

Today, with 565 members/artists attracting over half a million site hits from around the world in our first year, we have plenty to say and an increasing number of visitors dropping in every day to “hear” us out. With such a diverse group of artists with a wide range of talent, it is only natural that some of us would find ourselves joining forces on some cool collaborations/projects.

Our latest project, Get Off the Stage, written by one of our members who goes by the name “Mick”, is described in an electronic press kit he recently released and distributed. Here are some excerpts: 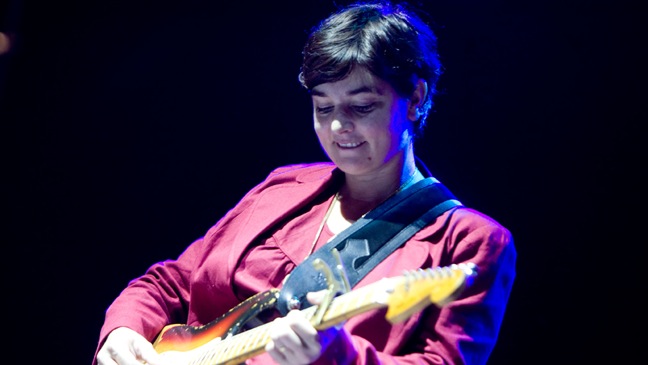 There is a new wave of protest music sweeping the country, but it’s not coming from the left — it’s coming from the right side of the political spectrum. A band of New Patriot musicians have collaborated to release a new song entitled Get Off the Stage and it has a potent message for President Obama and other leaders:

“We’re not following your act on Twitter, We’re not fans of your Facebook Page, Your 15 minutes are up, Get Off the Stage.”

This song is a collaboration by artists who believe in liberty and are not satisfied with country’s direction. All of the artists on the song are stars in their own right who have come together to record a song that sends a clear message to our country’s leaders that real change is needed. These artists have watched the country’s leaders expand the size of government, rack up huge debt, and ignore its citizens.

The song features Nashville lead vocalist Jana Seantelle whose rich vocals capture the ire that is rising in this country for real change.

Seantelle is joined by artists from a broad range of musical styles ranging from Jonathan Paddington’s searing rock guitar to Lisa Mei Norton’s insightful backing vocals. The cast and crew of The Big Dawg Patriots is filled out by 99.3FM and 1400AM KQMS Talk Radio Host Alana Burke, Nashville’s Jon Statham, Mick, and the original BigDawg (Andrew) on keyboards. The song was digitally mastered at Studio Paridiso by Shawn Biggs.

The BigDawg Music Mafia website is ground zero for the New Patriot Sound that is spreading across the country.

Jana Seantelle – The idea of a female vocalist, a country one at that, came after both Jon and Mick had tried out the song and did not find it fitting their voices. Jana was one of six female vocalists that responded to the Craigslist and BigDawg postings.

She wrote to Mick expressing interest in checking the song out and it was what she added in her email that led him to believe she might be the one:

“…I consider myself to be a Jesus lovin’, heat packin’, flag wavin’ AMERICAN!!! Here is a link to MySpace. You can hear my voice and get in touch with me if you think I’ll be a fit. -Jana”

Mick said that he listened to her song “From Memphis to Mama” and “was sold”.

Jonathan Paddington – Jonathan resides in San Francisco and is a lifelong guitarist who has maintained his chops despite a full-time career in business. He responded to Mick’s advertisement for a “kick-ass guitarist to record a TEA Party song”. And he certainly delivered!

Jon Statham – When Jon first saw Mick’s advertisement for an artist to record a TEA Party song, he had two simultaneous thoughts: “Was this someone trying to malign the TEA Party? If not, was I prepared to go all the way and stand behind it in principle if the lyrics rang true for what I believe? Luckily, it did!”

Get off the Stage puts forth common sense and is a great rallying vehicle. And we really need to rally right now. I’ve changed from apprehension about getting involved, to action. It’s like ‘My name is Jon Statham and this is what I believe.’ The time for just being a spectator is over for most people. There is too much at stake. One cannot sit on the sidelines anymore — it’s your future that is being decided right now!

BigDawg (Andrew) – My tenacious and gifted songmate Andrew (BigDawg), who played the keys for Get Off The Stage, is an extraordinarily busy man who somehow manages to carve out time to work on original music with me (and a few other artists), to post current news items at the site, and to promote the artists on several social networking sites. Those who are fortunate to know him know that he is the preeminent champion for the conservative culture warrior movement, and does more to promote the artists and the movement before 0700 every morning than most of us can accomplish in a full day — once a Marine, always a Marine!

I thank the Good Lord every day for giving this movement a true leader. Drew often says “For me it’s all about the music and the arts, helping others, making them believe in themselves, and encouraging them to get involved.”

Alana Burke – As host of The Alana Burke Show on 99.3FM and 1400AM KQMS , Alana has graciously invited several of our members to be guests on her show and has been a wonderful friend and advocate of our mission. When asked how social networking and having an internet radio audience has helped her promote the TEA Party cause, she replied:

Social networks allow me to keep my finger on the pulse of America and it is the voices of the often silent majority that I want to engage. People from every state are tuning in and most importantly, sharing their voices on the air, in chat, and on Facebook. It’s true that professional pundits are powerful people, but each and every one of us has the same weight when it comes to voting.

Lisa Mei Norton (that would be me) – Those who know me, know that my primary focus is encouraging fellow patriot artists to use their talents and get involved, and taking part in collaborations such as this one is always an added bonus. We all have different gifts to bring to the fight for this great nation. God expects us to use them. And when we pool our talents together, cool things happen.

As BigDawg and I continue to promote our mission to grow the conservative pop culture movement and to showcase our fellow artists, we continue working on our own songs and currently have several in the works in varying stages of completion. We are honored to be among so many amazingly talented patriots and enjoyed being a part of this project.

Mick – Like many of the artists at BigDawg’s, Mick is a new “activist” in the TEA Party movement who had this to say about how he got involved:

As TEA Partiers go, I am more of the accidental variety. I attended my first TEA party out of paternal protectionism rather than patriotism. My daughter attended the rally for a homework assignment, and I was there to protect her from crazed skinhead bigots intent on violence. I arrived at the rally ready to play man-to-man defense. Instead, I learned first-hand what Mark Twain meant when he said he “had a lot of worries in (his) life, most of which never happened.” His quote described perfectly my experience at the rally. Instead of nuts, I encountered reasonable people with reasonable ideas about the role of government in America. These people honestly feared for their children’s and grandchildren’s future. More than that, their distinct love of America was as refreshing as it was palpable. I was inspired and the chorus to We R Drinking Tea! (which was recorded by Jon Statham) literally popped into my head on the drive home from the rally.

As any amateur songwriter will tell you, we hear two things when we share a new song. First we hear: “that’s really good”, which is immediately followed by: what are you going to do with it?” We love the first part; the second part is kind of a buzz kill.

This time was different. I knew what I was going to do with it. When my wife and daughter inevitably played the watyagonnadowithit card, I replied “Share it”.

And sharing messages like Mick’s and those of all the other patriot artists at BigDawg Music Mafia is exactly what we are all about. As one BigHollywood reader put it (on last week’s spotlight piece on James Kole):

As the pendulum swings, its a new day coming, grassroots underground Patriots are moving into the light, one by one, to rescue the land…….,help is on the way! ~ Niner

We thank all of you who support the conservative arts movement and invite you to join us and share some of your own talent!