A slew of left-wing Hollywood figures hurled personal attacks against members of the Trump administration’s newly formed Council to Reopen America and jumpstart the economy.

As the United States prepares to re-open after suffering the affects of the Chinese coronavirus, Hollywood elitists have taken up bullying the members of President Donald Trump’s newly formed council tasked with getting America back to work.

“WHERE ARE THE PUBLIC HEALTH EXPERTS? Where are the doctors? Where are the scientists? WHERE?!” proclaimed left-wing actress and activist Alyssa Milano, who was last heard lecturing Americans by telling them to stop buying firearms during the coronavirus pandemic.

The Special League Of Shitheads https://t.co/jzyPuMxYFF

Actress Rosanna Arquette also chimed in with her remarks on the subject, sharing a simple eight-word tweet, which even included one typo.

“They council has zero credibility at this point,” tweeted the Diary of a Sex Addict actress.

They council has zero credibility at this point.

“Okay, first idea: Has America thought about inheriting wealth from its dad?” commented the Twitter account for The Daily Show.

"Okay, first idea: Has America thought about inheriting wealth from its dad?" pic.twitter.com/zt7IzDpyfL

“An overwhelming majority of the American public — 87% — is now making the effort to stay at home when possible, a new YouGov survey finds, with most saying they’ll continue regardless of any official limitations,” tweeted Ava DuVernay.

President Donald Trump announced on Friday that he would convene an economic advisory council focused on reopening the country. “I call it the ‘opening of the country council,’ so we don’t get it confused with Mike’s task force, which has done so great,” the president said, referring to Vice President Mike Pence’s coronavirus task force.

The council is still being built and reportedly consists of doctors, business leaders, and administration officials. But the left-wing celebs rushed to social media to smear the officials who were reported to be part of the new initiative. The president stated on Monday that White House advisors Jared Kushner and Ivanka Trump would not be on the council.

“In other words, we don’t trust Trump and these criminals,” added the Hollywood director. Ava DuVernay said in a tweet that she quickly deleted. 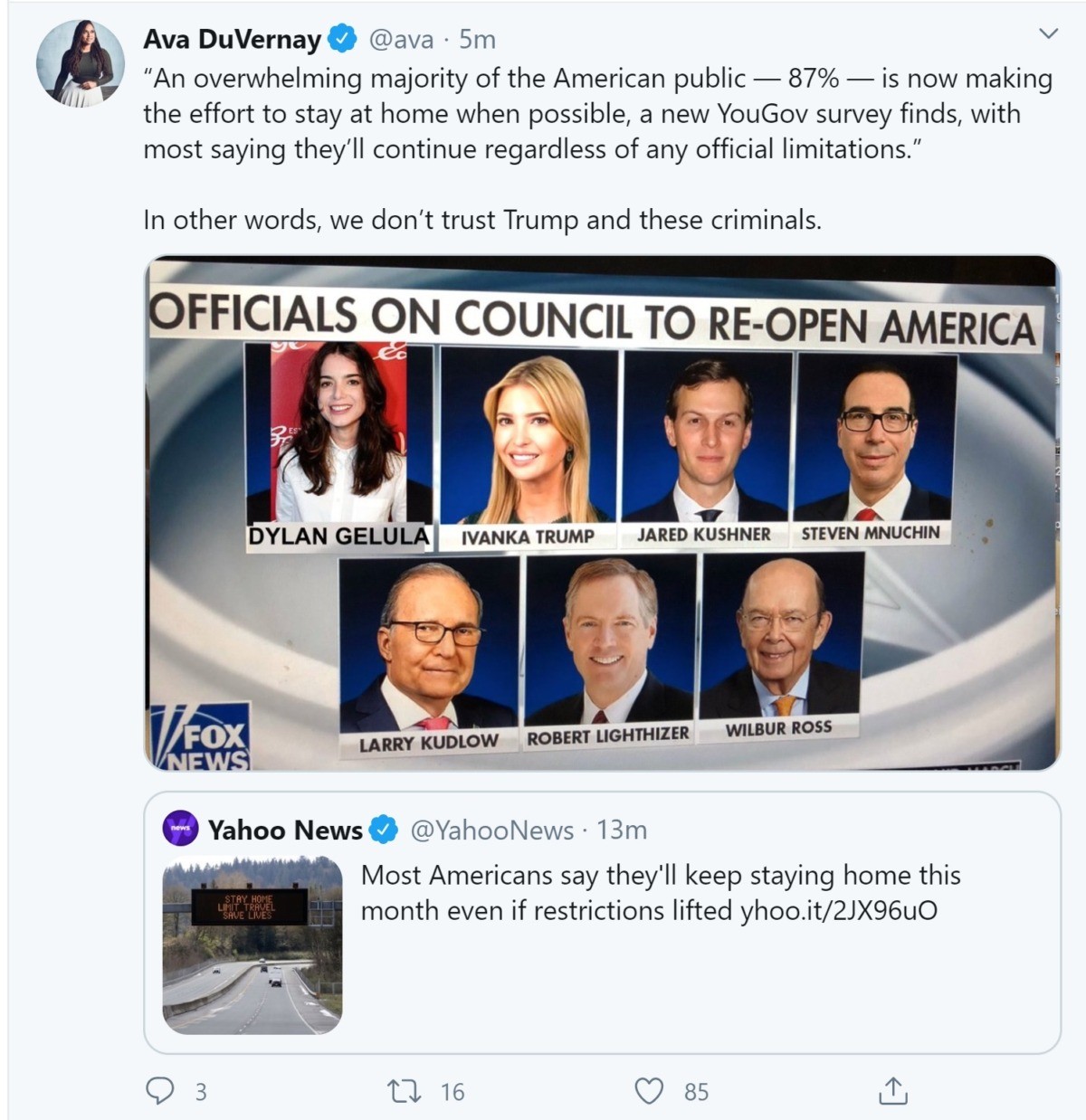 “Look, you’re free to think that these are the end times, but this is really putting your thumb on the scale,” said actor-comedian Andy Richter, who once noted that he was “eternally grateful” to Planned Parenthood over he and his girlfriend deciding to abort their baby in 1992.

Look, you’re free to think that these are the end times, but this is really putting your thumb on the scale pic.twitter.com/AijdkaxMkX

Our very own Star Chamber pic.twitter.com/H4b2sbpKCd

“Why can’t I get appointed to stuff? I’m not qualified for anything, either,” tweeted left-wing actor Michael Ian Black, who has previously tweeted about child molestation involving so-called jokes about having sleepovers with young girls, and having “quick” intercourse with a baby.

Why can't I get appointed to stuff? I'm not qualified for anything, either. pic.twitter.com/OQEpWWUpFF

Actress Mia Farrow also piled on, My God- these ⬇️ are the people to decide on when the country should re-open. Not one doctor.”

My God- these ⬇️ are the people to decide on when the country should re-open. Not one doctor https://t.co/sejFFldsP3

“May have taken over a decade but we finally got our death panel,” quipped comedian Travon Free, who currently writes for the show Full Frontal with Samantha Bee, which had lost a plethora of advertisers in 2018 after its host called President Trump’s daughter Ivanka as a “feckless cunt.”

May have taken over a decade but we finally got our death panel. pic.twitter.com/Zixmx7KbnK