Demi Lovato went after President Donald Trump in her new song, “Commander in Chief,” in which she asks the president, “do you get off on pain?” and warns, “best believe, we’ll still take a knee while you’re Commander in Chief.”

Here are the lyrics for “Commander in Chief”:

Were you ever taught when you were young
If you mess with things selfishly, they’re bound to come undone?
I’m not the only one
That’s been affected and resented every story you’ve spun, and I’m a lucky one

‘Cause there are people worse off that have suffered enough
Haven’t they suffered enough?
But you can’t get enough of shutting down systems for personal gain
Fighting fires with flayers and praying for rain
Do you get off on pain?
We’re not pawns in your game

Commander in Chief, honestly
If I did the things you do, I couldn’t sleep
Seriously, do you even know the truth?
We’re in a state of crisis, people are dying
While you line your pockets deep
Commander in Chief
How does it feel to still be able to breathe?

We were taught when we were young
If we fight for what’s right, there won’t be justice for just some
Won’t give up, stand our ground
We’ll be in the streets while you’re bunkering down
Loud and proud, best believe
We’ll still take a knee while you’re…

Breathe
Be able to breathe

The Grammy-nominated singer is taking heat from her own fanbase for releasing the political charged song.

Lashing out on social media, Lovato said “The difference between me and the type of artist you WANT and EXPECT me to be, (but I’m sorry honey that will never BE me) I literally don’t care if this ruins my career.” 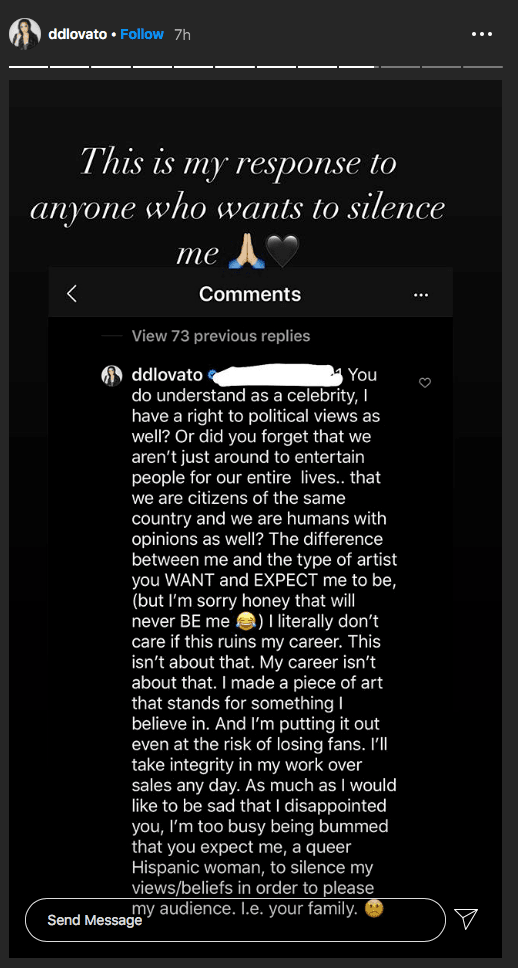 Lovato worked hard in 2016 to get Hillary Clinton elected, appearing onstage at the University of Iowa to endorse the Democratic candidate in January of that year.

Last month, the singer expressed that she is “ashamed of her privilege,” stating, “I hated that I shared the same skin color as the people accused of committing heinous crimes” against black people in recent months.