A striking photograph showed a California firefighter saving an American flag despite dangerous flames from the Dixie wildfire.

The unidentified firefighter was seen holding onto the flag and its pole outside a burning residence in Greenville on Wednesday as humongous flames raged in the background, the New York Post reported.

“In this first photo, a firefighter saves an American flag as flames from a burning home make their way down the street,” photographer Josh Edelson wrote in his Instagram post:

Additional photos showed buildings engulfed amid the state’s biggest wildfire, which devastated much of the town that dates back to the Gold Rush, the Post article continued:

The three-week-old blaze, which has blackened well over 435 square miles, appeared to have been coming under control until 40-mph gusts and bone-dry vegetation fueled it again, officials have said. Late Wednesday, the Plumas County Sheriff’s Office warned the town’s approximately 800 residents, “If you are still in the Greenville area, you are in imminent danger and you MUST leave now!!” 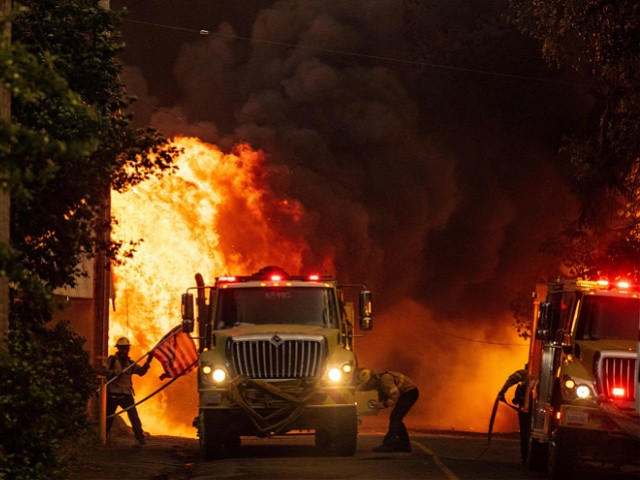 A firefighter saves an American flag as flames consume a home during the Dixie fire in Greenville, California on August 4, 2021. (Photo by JOSH EDELSON/AFP via Getty Images)

Dangerous weather conditions of high heat, low humidity, and gusty winds were expected to be an ongoing threat on Thursday night.

Cal Fire said the Dixie fire was the sixth-largest in the state’s history, covering 322,502 acres.

“As we head into the weekend, triple digit temps are expected in many parts of CA! Avoid the sparks that start wildfires by never using outdoor equipment or driving a vehicle on dead or dry grass,” the agency noted:

The #DixieFire is now the 6th largest fire in CA history at 322,502 acres. As we head into the weekend, triple digit temps are expected in many parts of CA! Avoid the sparks that start wildfires by never using outdoor equipment or driving a vehicle on dead or dry grass. pic.twitter.com/SsXWRlIGth

The San Francisco Chronicle posted video footage of what was left in Greenville after the blaze, showing emergency workers walking through the dust and debris:

Meanwhile, Twitter users commented on the photo of the firefighter with the American flag, one person calling him a hero for saving it.

“Thank you Ladies and Gentlemen of the FD!!” another commented.

“True American right there,” yet another user replied.