Fresh allegations have emerged regarding sexual impropriety, child abuse, and a co-ordinated cover-up by Labour and Liberal Democrat Party officials in the Greater Manchester Area, Breitbart London can exclusively report.

Following on from the expose that 1400 young, white girls had been abused at the hands of Pakistani gangs in Rotherham, Breitbart London can report new allegations that have come to light about other instances of public sector and government officials colluding to keep information out of the public domain.

“You will have noted that Rochdale is currently in the eye of a media storm regarding child abuse and cover ups.

“The story that has yet to break is the role of the council leader, XXXXXXXXXXXXX, in all of this. He was given files on the abuse at Knowl View school and Cyril Smith over 10 years ago but he did nothing because the Labour Party had done a deal with the Liberals to keep quiet on Cyril. This was in exchange for the Liberals keeping quiet on allegations that XXXXXXXXXXXXX had sex with two girls with special needs that were in his care.”

Breitbart London has chosen to redact the names of others implicated in the “deal” due to an ongoing investigation by Greater Manchester Police.

Cyril Smith, who was the Liberal Democrat Member of Parliament for Rochdale from 1972 to 1992 has long been implicated in child sex abuse scandals, and is widely believed to have been a predatory paedophile. In 2012, Martin Digan, the former head of care at Knowl View Residential School, told the Express that he was concerned that the school was becoming “a sweet shop for paedophiles” – with specific reference to Smith.

He said: “I worked there for a long time and the stories about Cyril resonated throughout the building. To see him bouncing seven-year-old boys up and down on his knee was frightening. The sexual abuse of boys with learning difficulties did become public but no one ever proved anything against Smith. He was a very clever man who covered his tracks very well.” 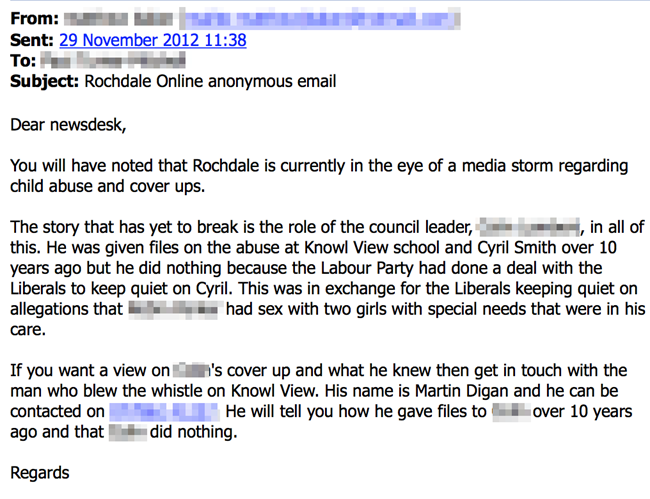 The allegations over a cover-up “deal” were originally made to the Labour MP’s staffer by a long since departed Liberal Democrat councillor. When asked to confirm that the original e-mail was indeed sent by him, the Labour staff member admitted it, which has raised questions as to why no one contacted the police at the time.

A spokesperson for the Greater Manchester Police confirmed to Breitbart London that the latest development was indeed being investigated, and has been passed on to a mammoth team of police working on all evidence that is now coming to light. The police would not speak about the specific e-mail in question, but confirmed that they had received it and that it had been passed on to the investigations team.