Have you ever picked up a newspaper, read a story about the teaching unions and thought: how on earth did these people get into positions of influence? Why is everyone so stupid? Well, you’re not alone. And, if a graph that landed on my desk yesterday is right, there’s a scientific basis for your frustration: you’re probably a lot smarter than they are.

The chart, created by data scientist Randy Olson in June, shows the average IQ of US college majors in various subjects. The data is plotted against gender too, but we’ll come to that can of worms in a minute. Physics, engineering, philosophy and computer science are the hardest subjects with the smartest students. Social work, health and education scoop up the dregs. (“Gender Studies” doesn’t even make the cut.) 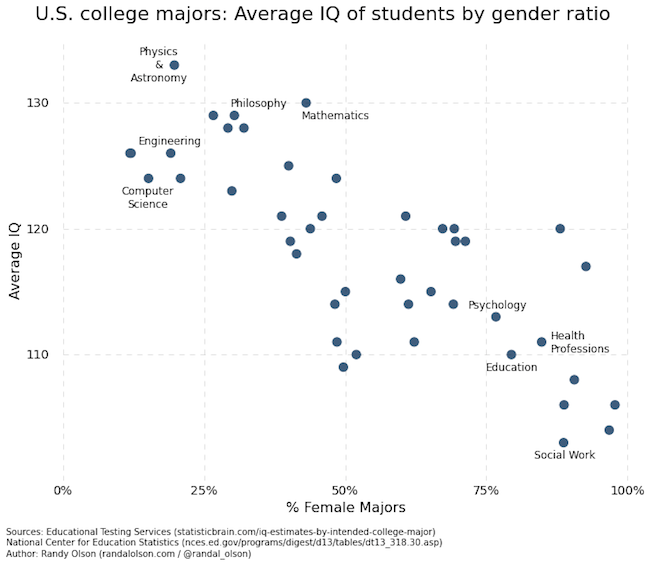 But hang on. Social workers, teachers, the NHS… aren’t these all the groups we’re relentlessly told to “listen and believe” and whose tweets and impassioned blog posts kick off media storms on a near-daily basis? The BBC, the Guardian and the Labour Party treats these professions as somehow sacred. They’re our proud, hard-working backbone, protectors of the people, brave morally unimpeachable trustees of the nation. So they are allowed disproportionately large voices in our debates and awarded undeservedly privileged status in our national culture.

Yet aren’t these same groups the ones so hopelessly incompetent that they’re snatching babies from perfectly fit parents, allowing children to graduate dumb as boxes of frogs and killing off our elderly relatives in filthy, haphazardly run hospital wards? If only nurses put as much effort into keeping their patients alive as they do into strike action and marches against the evil Tories.

The truth is, compared to every other profession, these are some of the least intelligent people in society and thus to anyone with any common sense the last people who should be invited on TV and given national newspaper blogs to talk about serious issues. Yet up pops the Guardian with a sob story from a nurse about how hard she works and that’s supposed to affect how we believe the NHS should be run.

And just look at the way power works these days on social media. Remember Dr Matt Taylor, the hero scientist who landed a probe on a comet? His achievement was totally overshadowed by feminist critics who picked on him for wearing a saucy but totally harmless shirt and abused him on Twitter for being a “sexist.” The bulk of the criticism came from the sort of people I just described.

And when you look, too, at risible enterprises such as the Everyday Sexism project, you see a pattern emerge: dig down into individual tweets and you invariably see “nurse,” “teacher,” “social worker” or something similar in the bio. Why are we allowing people so obviously ruled by emotion instead of reason to chart the course of national debate?

It’s galling because the smartest members of our society are rarely heard from. Physicists and mathematicians aren’t always the most camera-friendly of people, though they are the ones who move human civilisation forward. What we consider news these days seems more concerned with gender pronouns than it does scientific progress. When was the last time you saw a scientist on Newsnight? Can you even remember one?

Of course, there are all sorts of reasons some people don’t like IQ as a measure of intelligence. Some people say it’s biased against women and non-white test subjects. And we should note that the scores above are inferences from SAT scores and not specially-tested students. But IQ remains one of the most accurate gauges we have of a person’s future success and earning potential in today’s economy. And it’s a pretty solid indicator of their reasoning skills, too.

Now let’s consider gender. It’s not accurate to say, based on the data above, that “women are thicker,” although I know that’s what you’ll have been wondering. But if it’s true, as some claim, that there are similar numbers of men and women in each percentile of IQ, why do we see the graph above? If the smartest women aren’t learning how to land probes on asteroids or unlocking the secrets of the universe with maths, what are they doing? Where are they?

The best guess from feminists trying to explain away graphs like the one above is that those unmarked subjects in the middle of the graph–history, foreign languages, English, law–attract roughly equal numbers of male and female students but that the women studying those subjects are a lot cleverer than the boys. The problem is, many of the jobs these degrees lead to, in lawyers’ offices and research organisations, don’t have much purchase on the media. So we only ever hear from thick birds.

But women and men aren’t equally distributed in IQ quartiles. So that explanation doesn’t hold water. Here’s an infamous graph that makes for uncomfortable reading for Women’s Studies professors and other academic champions of “equality.” This data is uncontroverted, but not uncontroversial: Larry Summers got fired from the presidency of Harvard University just for alluding to it.

What this chart shows is that women tend to fall around the “average” IQ compared to men, who are more often outliers. That is to say, more of the very smartest and very stupidest people are men, while women tend to cluster around the mean. There are vanishingly few women who score over 130 on an IQ test and are classified as having “very superior intelligence.” Make of that what you will.

What will be frustrating to many readers is how little heed is paid to the smartest among us, who, if we only listened more often to them and stopped running them down as autistic geeks, video game freaks and oddball science professors, might have better ideas than the “education experts” and social workers who currently dominate discourse in the public square about how society ought to be organised.

It’s not as simple as: we need more men on TV. But perhaps we should learn to be less needlessly sensitive to superficial irrelevancies such as the sex organs of the speaker, and concentrate on what they’re saying, how smart they are and what they do. It’s not too much to ask that the media should want to get the best possible people in front of the nation to explain complex concepts and explain their ramifications.