Tendring, which includes Mr Carswell’s constituency of Clacton-on-Sea, was elected as 23 Conservative councillors, 22 UKIP councillors, six Independents, four Labour and others. It was formerly a Conservative controlled council, but the Tories lost overall control after a local UKIP surge at the General Election.

But now the UKIP group looks set to split into two, with the nine-strong, pro-Carswell, pro-Tory group calling themselves “Tendring UKIP”. The others, reported to be more like ‘real UKIP’, are said to be loyal to Nigel Farage and UKIP first – a fact that allegedly irks Mr Carswell.

The council’s own website appears to confirm the split, with nine councillors listed as “Tendring UKIP” or “TenUKIP”, with the other 13 listed simply as “UKIP”. 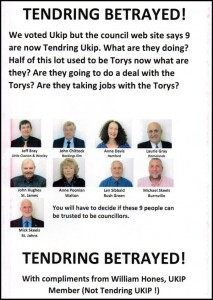 Senior UKIP sources have told Breitbart London over the past few hours that Mr Carswell has been embarking on an anti-Farage campaign locally, in addition to his recent attacks on the party leader nationally. They also report that the nine-strong Tory-aligned group are being “bought” off with provisional cabinet positions on the council, which means more money for them as councillors each year.

The Clacton Gazette has confirmed the split, claiming that local councillor Mick Skeels is to lead the “TenUKIP” group.

Locally, Breitbart London understands that flyers (right) are currently being distributed in the constituency, disowning the “TenUKIP” group. A senior source in the local party told Breitbart London he was “spitting feathers” over the actions of Mr Carswell, as well as UKIP’s Deputy Chairman Suzanne Evans, and disgraced MEP Patrick O’Flynn for their work in trying to destabilise Mr Farage and his team.

Recently, co-ordinated attacks have been levelled against “Team Farage” in Britain’s newspapers, as well as on online forums. This week saw a number of anti-Farage critics hit out at UKIP’s Head of Candidates, who is known to have battled intensely for Farage during the failed coup against him.