Reports surfaced in the German media yesterday that Chancellor Angela Merkel had collapsed while attending the 104th Wagner Opera Festival in Germany. Several mainstream news outlets, such as Der Speigel and Bild, reported the incident only to have it contradicted later by Chancellor Merkel’s spokesman. 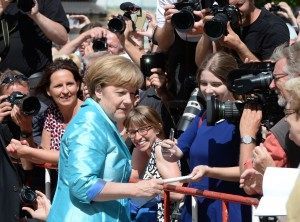 Initial reports stated Merkel, 61, collapsed during the interval of “Tristan and Isolde”, the opening night’s opera at the Bayreuth Festival. She reportedly fainted and fell from her chair inside a restaurant and according to Bild‘s earliest reports was unconscious for a few minutes. A short while later she was able to regain her feet, after having received what Der Speigel described as “first aid” from others at her table including President of the Bundestag Norbert Lammert and Federal Culture Minister Monika Grütter.

Fears that Chancellor Merkel has been under considerable strain of late added to initial concerns about her health. She has been key to most of the marathon Greek bailout negotiations, described in the Financial Times as “extremely hard, violent even“. Reuters reported private conversations in which Merkel said “her biggest fear is that Germany [and by extension she] could be blamed for “blowing up Europe” for the third time in a century.”

If Chancellor Merkel was suffering ill health at this crucial time for the European and global economy, it would certainly ‘spook’ the markets. German investors would fear major losses when markets open for trading on Monday.

Stoking this fear is the fact that this would not be Merkel’s first fainting fit. Stress and dehydration once triggered her collapse on the first day of her CDU party congress in Cologne and commentators have recently observed her tired appearance.

In the end the explanation for this occasion is rather more prosaic. According to Merkel’s spokesman their was no collapse. Reportedly rather than fainting she had attempted to sit on a broken chair and fell under a table. She attended the second half of the opera telling the media she “really liked it.”

Global financial markets will breathe a sigh of relief if the initial reports were, indeed, exaggerated.