Three sisters are planning to rally topless in Ontario, Canada this weekend in protest against being ordered to cover up while out cycling last week. 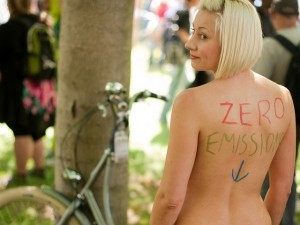 Naked cycles have become a standard part of the SJW demonstration arsenal in recent years. Pictured is a participant in the 2014 London Naked cycle / Getty

Tameera, Nadia and Alysha Mohamed took their shirts off while riding in the Canadian city on Friday last week, reports CBC news, after they found the summer heat too much for them. They claim they were pulled over by a police officer who ordered them to put their clothes back on. The officer then denied that was the reason he’d pulled them over soon after they started recording him with smartphones.

Thanks to a similar 1991 case involving a local student, all Ontario women have the legal right to bare their breasts in public.

Explaining her reasoning behind making an official police complaint and holding a ‘desexualisaion’ rally this weekend, sister Nadia Mohamed said: “When men take off their tops in public, it’s clearly because it’s a hot day and clearly it’s for their comfort. Women should be given the same freedom… Even though legally we have that right, socially we clearly don’t”.

“We hope to educate the public about women’s rights when it comes to toplessness and also to counter some of the rape culture rhetoric that is out there… We hope that people will think more critically about why a woman topless is asking for attention, when this thought never crosses most people’s mind at the sight of a man doing the same thing.”

If you find yourself in Ontario at the weekend and are curious to see what’s going on, you can join the protesters in Waterloo town square from 5pm.