LONDON, United Kingdom – Today, outside the gates of the Prime Minister’s residence at 10 Downing Street, the flags of terrorist groups Hezbollah and Hamas were flying proudly beside those of Britain’s labour unions and the Socialist Workers Party. The pro-Palestinian and pro-terrorist rally called in protest of the presence of Israeli Prime Minister Benjamin Netanyahu turned violent, with cars coming under attack and several arrests made.

The Prime Minister of Israel is scheduled to arrive in the UK tonight for a series of meetings with the British government. In protest of the visit, the Socialist Workers Party, Stop the War Coalition, a number of trades unions and Anti-Israel interest groups organised the demonstration which attracted around 1000 people. Several hundred pro-Israel protesters were there to meet them. 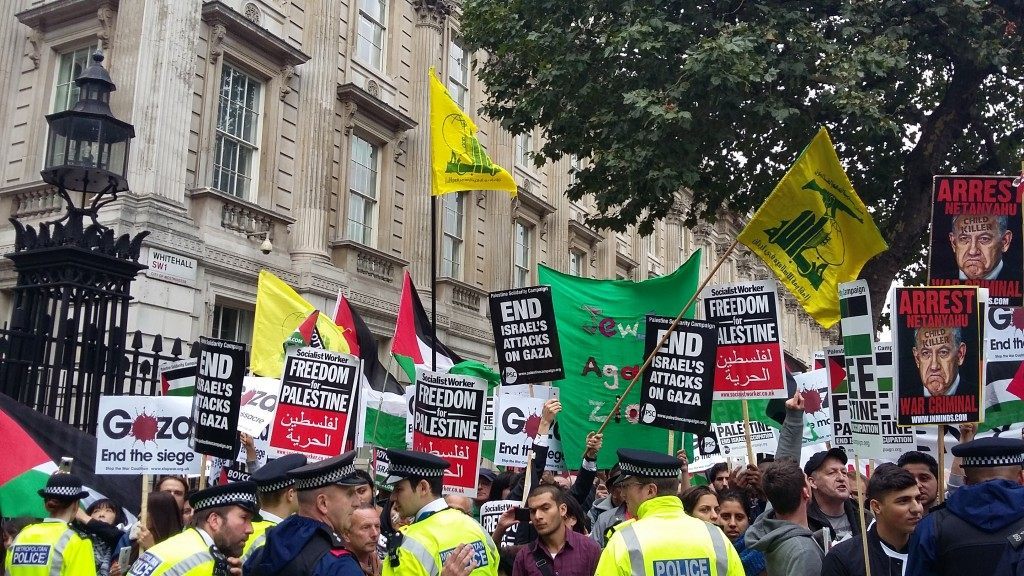 Things started off peacefully but chanting was aggressive: “We want peace, you want war!” shouted the Israeli side, “Baby killing scum!” screamed their opponents.

About an hour in, a small group of pro-Israel protesters crossed the road towards Downing Street. They were followed by hundreds of pro-Palestinian marchers, who quickly surrounded them. The police appeared unprepared.

There were a number of scuffles and several vans of police reinforcements were needed to separate the groups. A passing car flying an Israeli flag was repeatedly kicked, and a pro-Palestinian campaigner who attempted to jump on the bonnet was arrested.

The Hezbollah and Hamas flags fluttered in the background, and were worn proudly on the t-shirts of young Asian men in the crowd. When I asked to speak with them, they told me to “get lost.” 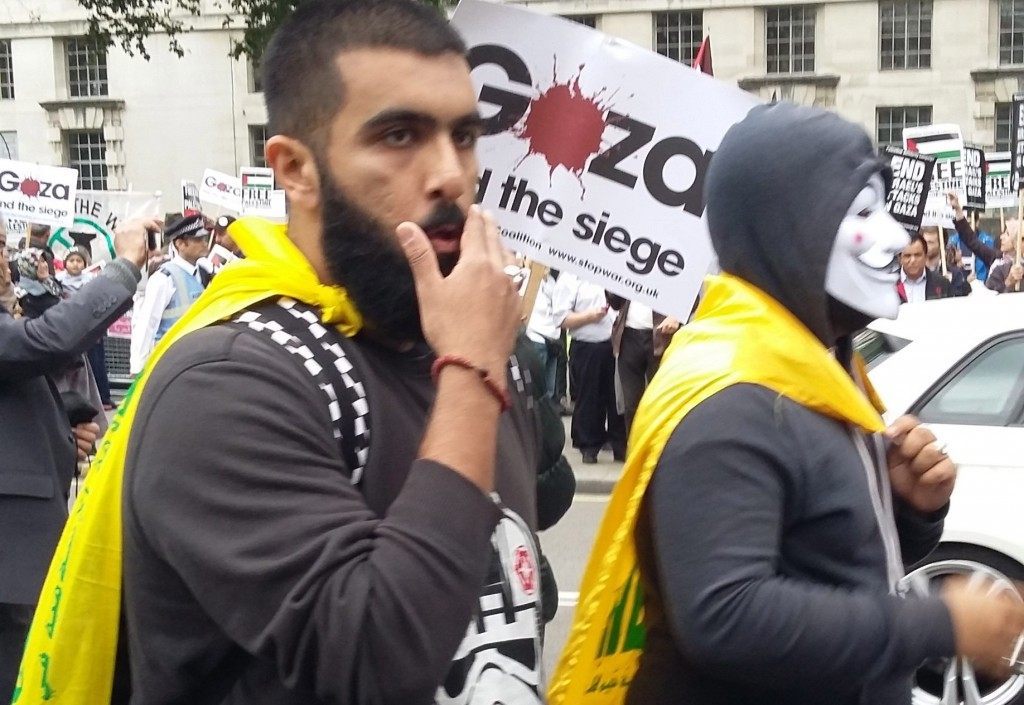 Arrieh A. Miller, executive director of The Zionist Federation, told Breitbart London: “The yellow and green flags over there are Hezbollah, there’s also a Hamas flag on the reverse of one of them.

Ostensibly, brandishing the flag of a terrorist organisation is an arrestable offence, but the police seemed as uninterested as they were in taking action against the man who flew the ISIS flag outside Big Ben.

“We’ve complained to the police about it and they have said they will deal with it. They are a proscribed organisation in the UK, a proscribed terrorist organisation, as are Hamas – by the EU,” Miller continued.

“This shows the message of the protest. That demonstration is not against Netanyahu, it is not even against Israel; it is in support of terrorism.

“What we talk about is a red-green alliance, which is the socialists aligned with the pro-Palestinians and anti-Zionists. 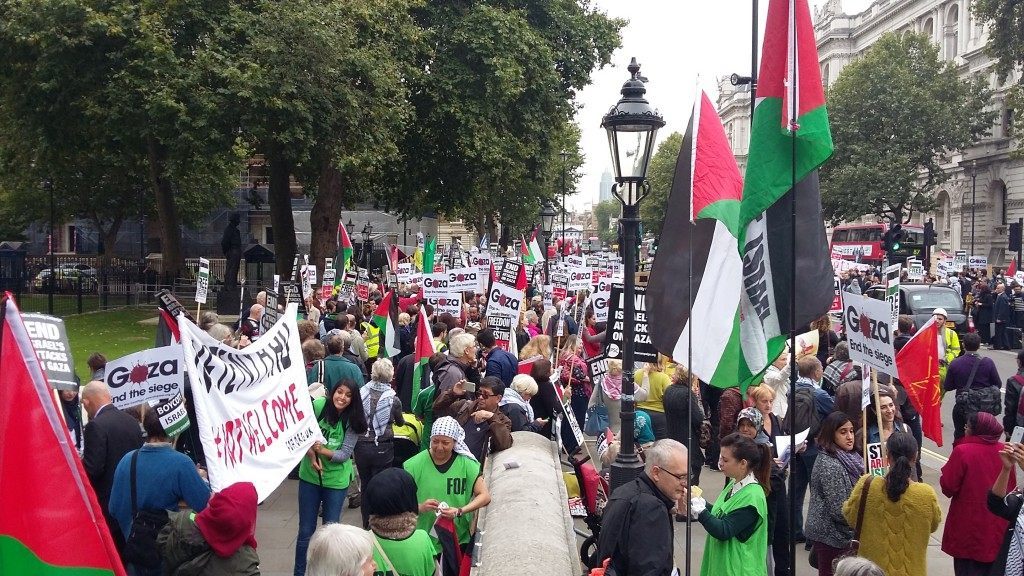 The Gaggle Outside Downing Street

I asked Mr. Miller if the 94 per cent rise in anti-Semitic attacks over the past 12 months, revealed by the Metropolitan Police two days ago, was animated by the hatred on display at today’s demonstration.

“Absolutely,” he replied, “I’m not calling every single one an anti-Semite. But, definitely, the people flying Hezbollah flags must be dealt with appropriately. It is absolutely disgusting that people are allowed to fly terrorist organisation flags in the UK.

“When people tried to support the Nazis in the UK, the British people stood against them. Now, we have people openly supporting other terrorist organisations, other people who are solely looking to destroy the Jewish community in the UK and around the world. That is what we are here to stand against. 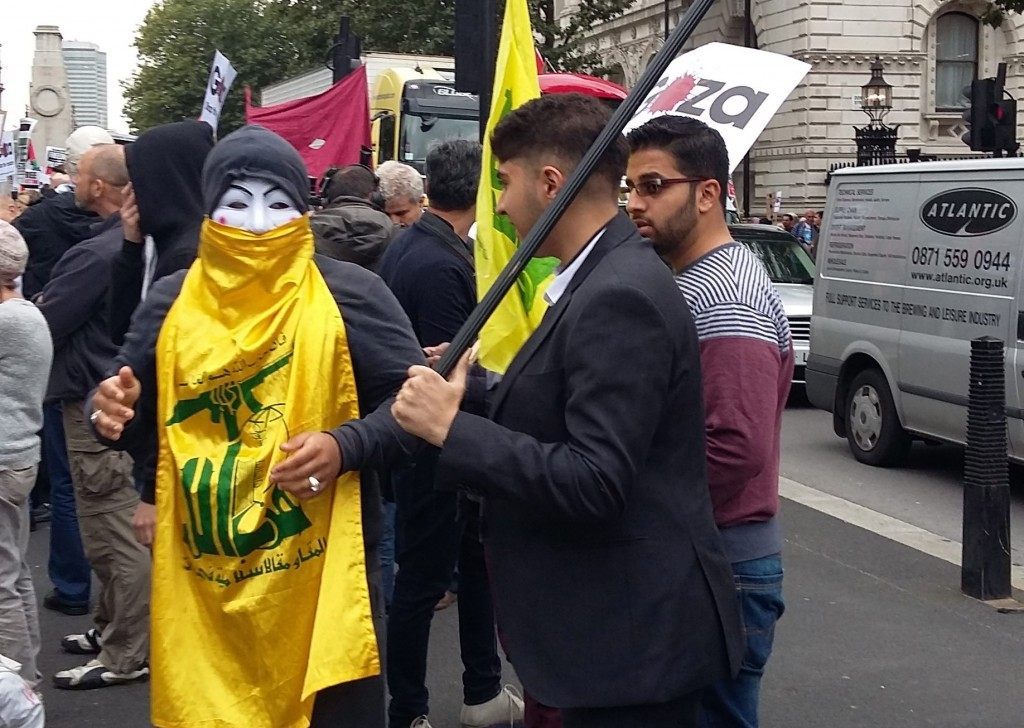 But Zaher Birawi of the Palestinian Forum in Britain told me: “I have no doubt that it is the foreign policy of the government that is increasing the hatred among [British] society and in the world,” when I asked about the rise in anti-Semitism.

He said he was in attendance, “to protest against the Bibi Netanyahu visit to Britain, because we consider him a war criminal. He should not come to the UK and he should be arrested,” he said.

On Monday, in a letter published in the Guardian, union leaders, Labour Party parliamentarians and prominent left-wingers were in agreement, calling on the Prime Minister to, “impose immediate sanctions and an arms embargo on Israel until it complies with international law and ends the blockade and the occupation.”

“…Our prime minister should not be welcoming the man who presides over Israel’s occupation and its siege on Gaza,” the letter claimed. 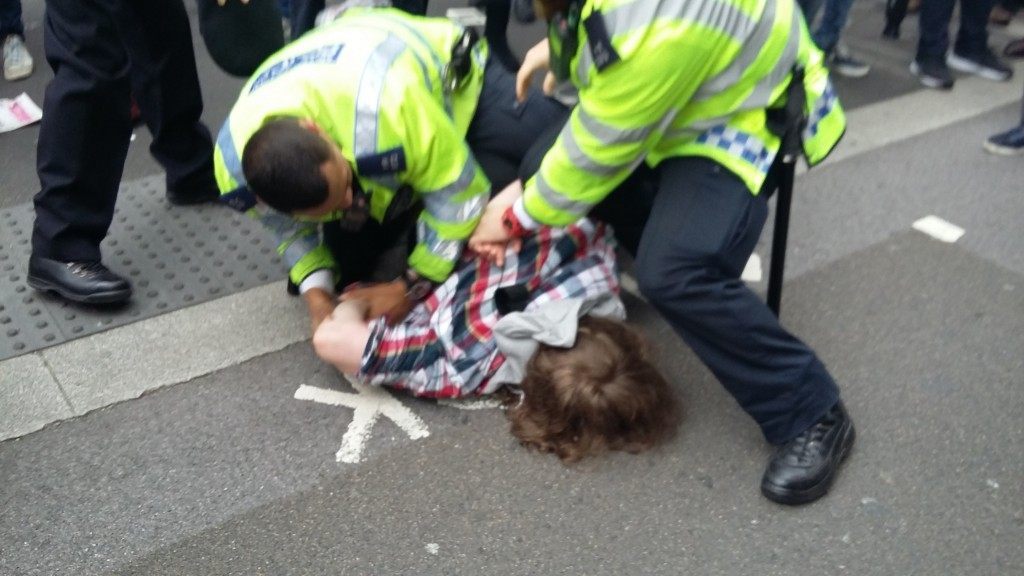 Birawi continued: “We are here to oppose the position of the government led by David Cameron… at least if the meeting to happen [sic] we ask that David Cameron tell Netanyahu to stop his racist procedures and practices and to finish the occupation and the Judaisation of Jerusalem.”

I asked Birawi about Jeremy Corbyn, he said: “Definitely, Jeremy Corbyn is a real leader for the British society. These voices in front of Downing Street have big hope for Corbyn, that he will change the face of the policy in the UK, and he will support just causes in the world – mainly Palestine.

“I don’t think the British people agree with the policies of David Cameron, and I believe Jeremy Corbyn is a real leader. In the future he will be the Prime Minister,” he predicted. 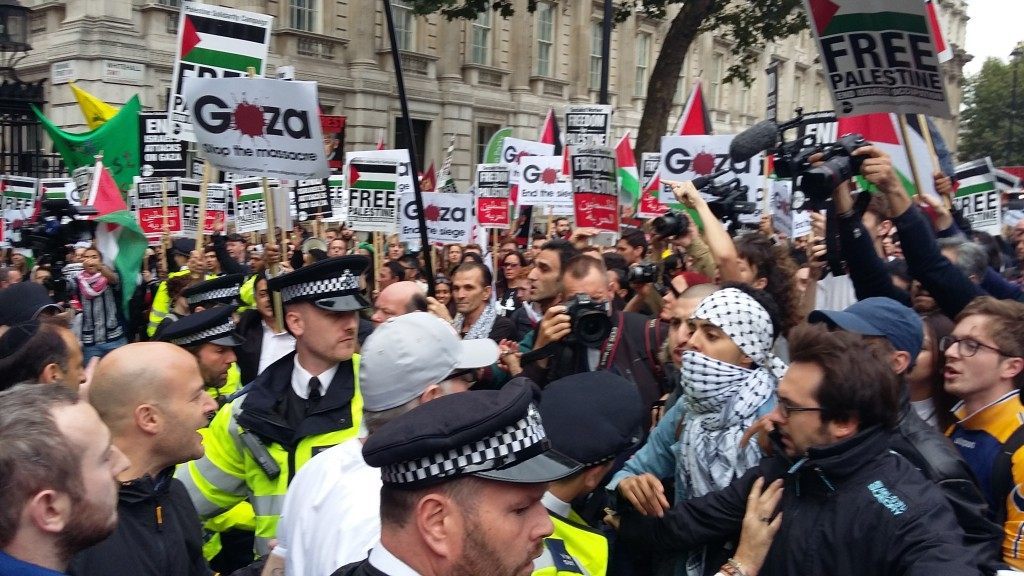 I also asked Mr. Miller about the rise of Jeremy Corbyn, who has described Hamas and Hezbollah as “friends”.

He said: “[Corbyn] has justified his statements about Hamas and Hezbollah by saying the only way to come to peace is by sitting around the table with people you disagree with, and that he holds them to account for the things he doesn’t agree with. If that is genuine, then I would probably stand next to him and agree with him on some things. 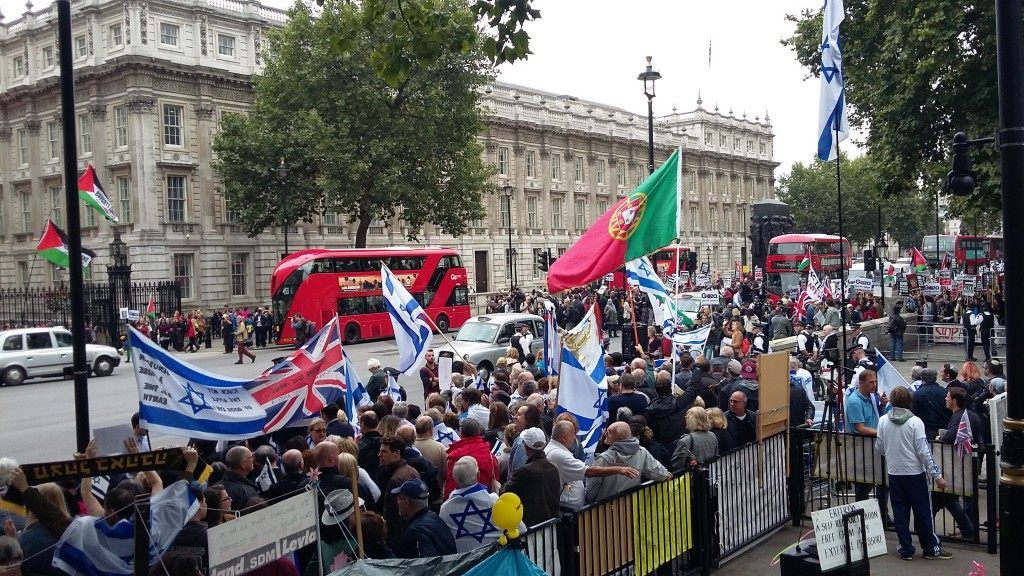 Britain’s mainstream media has been predictably silent on the violent nature of the protests, with only the Guardian offering a perfunctory article about the day in general, choosing not to show terrorist flags, or note the aggresion by the anti-Israel protesters.