A German photographer has started a campaign to have “right wing propaganda” censored on Facebook, but pornographic images of women allowed. He’s calling it “nipples instead of incitement.”

Photographer Olli Waldhauer kicked off his campaign by posting an image on Facebook of a topless woman stood beside a man holding a placard with racist slogan written on it.

“One of these people is against the rules of Facebook,” reads the slogan on the image.

Moderators deleted the image after 21 minutes. “Good people, I had to change my profile. Facebook did not come clear with the amount of friend requests. Thank you for your feedback and support,” wrote Mr Waldhauer on his page afterwards.

“What madness from a small image can be everything. Thank you all! Always remember #nippleinsteadbaiting!” he added later. 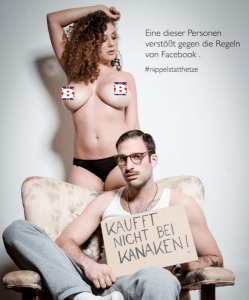 Mr Waldhauer is now encouraging his follower to download the image and post it on their own pages, in the hope of pressuring Facebook moderators in the spirit of the #freethenipple campaign.

The #freethenipple campaign aims to end the “discriminatory” banning of female breasts on social media, and so stop men finding breasts attractive by exposing them more often (according to their logic).

From his social media profile, Mr Waldhauer appears to be strongly in favor of mass migration, and has previous started a campaign labeled #iamnotaterrorist to challenge animosity towards migrants from the Middle East.

His dream of censoring political debate on Facebook is less outlandish. In September German Chancellor Angela Merkel said she wanted more Facebook to filtering “hateful” and “racial” posts. Journalists overheard the comments as she conversed with Facebook CEO Mark Zuckerberg at a UN summit.

“When people stir up sedition on social networks using their real name, it’s not only the state that has to act, but also Facebook as a company should do something against these paroles,” Mrs Merkel later told regional newspaper Rheinische Post.