The Netherlands’ best-selling newspaper has presented damning testimony that the criminal trial against anti-Islamification campaigner Geert Wilders is flawed, with many complainant declarations “fake”.

Dutch Party for Freedom (PVV) leader Geert Wilders’ trial for supposed hate speech started this morning, but the quality of the government prosecutor’s case has been called into question. Earlier this week De Telegraaf published a leaked report suggesting many of the 6,400 plaintiffs in the case were not Dutch speakers and hadn’t even been aware they were signing statements.

The report from the weekend edition stated: “The charges [against Wilders] were often pressed by ignorant, non-Dutch speaking and sometimes even illiterate elderly immigrants who had no idea what they were doing”. In total the Dutch government received some 15,000 complaints of discrimination.

The actual reasons behind the majority of the 6,400 complainants may never be known, as the judge presiding over Wilders’ case refused the defence the opportunity to investigate the plaintiffs. It was only after “much pleading” he was finally given access to just 15 of the 6,400. 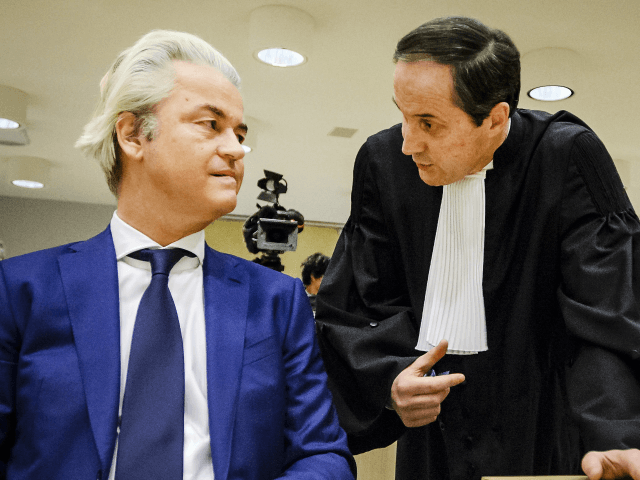 One complainant told Mr. Wilder’s defence lawyer Geert-Jan Knoops that outsiders had come to his mosque with papers, claiming they were ballot papers. Doing what he was told, the man duly “voted” for Mr. Wilders, or so he thought. When pressed by the defence lawyer, the Muslim was shocked to hear Mr. Wilders was to go to court because of the paper he had signed, he had no idea what it was or who Mr. Wilders is.

One of the other witnesses spoken to by the defence lawyer was also given already filled-out papers at his mosque. He said he saw other people doing the same, and believed that at just one mosque as many as 1,200 people complained against Mr. Wilders.

Another witness said he had been walking through the market and a group of men pressed a complaint paper into his hand and told him he had to sign it. He agreed because he didn’t want a fight but explained he didn’t know what he was signing — the man professed to being illiterate.

When pressed by the lawyer, the man said far from feeling discriminated against he felt Mr. Wilders had the right to say what he wanted, as long as that right was also extended to others.

On my way to court in police escort. No one will silence me. No terrorist, no prime minister and no court either.

These questionable practices extend well beyond Dutch mosques. One complainant spoken to by lawyer Mr. Knoops reported when he went to a police station to make a complaint, the officers there said they also felt “uncomfortable” about Mr. Wilders’ words. The officers filled out the complaint forms out on behalf of the men, which they couldn’t read as an interpreter was not present. The man remarked “I was told to sign the document”.

While the way in which the prosecution was brought may cause concern, ultimately it may not interrupt the prosecution of Mr. Wilders, as the court may judge his call for “less Moroccans” to be a criminal offence in any case.

The case now underway relates to comments Mr. Wilders made in March 2014 at an electoral rally where he asked supporters whether they wanted more or fewer Moroccans in the country. As they chanted “fewer, fewer” in response, Mr. Wilders replied: “We’ll organise that”. The case is now being seen as a major test on the limits of freedom of speech in the Netherlands.

Mr. Wilders has previously been acquitted on making anti-Islam statements, but he is now being charged with “insulting a group” and inciting hatred and discrimination. He has called the present trial “politically motivated”, a point of view apparently supported by a Turkey-based Dutch-Moroccan Al-Jazeera journalist who today boasted about her role in brining Mr. Wilders to court:

In 2014 my team & I asked people to report #Wilders' hate speech against Dutch-Moroccans. 6,000 reports laters we finally have a trial.

Once today’s procedural hearing is complete, the case will resume in August, with a judgement expected in November.