With a storm raging around Boris’s weekend comments, it is fair to point out that the European Union (EU), and the project for a European superstate, did in fact have a distant and fleeting relationship with Nazism.

It is not surprising, as centralised power has often had some unpleasant proponents, and a closer look at some of the EU’s founding fathers should give pause for thought. 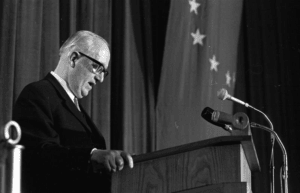 He also served as an artillery officer in the German army until captured in 1944. It is said he never joined the Nazi Party, so perhaps he should have let the odd memberships lapse. Either way, he was certainly more successful in fulfilling the vision of a united Europe second time around.

But never mind about that. Letʼs hear some good, simple common sense about the EU:

“A stronger sense of economic community among European nations must be aroused by collaboration in all spheres of economic policy (currency, credit, production, trade, etc). The economic consolidation of European countries should improve their bargaining position in dealings with other economic groups in the world economy.

“This united Europe will not submit to political and economic terms dictated to it by any extra-European body.”

An excerpt from a European Commission policy document? No. These are the post-war plans of Walther Funk, Hitlerʼs Minister for Economic Affairs and a war criminal. He also had a few ideas about currency:

“The price level will have to be adjusted to that of Germany.”

Even the go-to men are not what they seem. The EU Commission describes Konrad Adenauer, West German Chancellor from 1949-63, as a “pragmatic democrat and tireless unifier”. He was certainly pragmatic.

One of Adenauerʼs closest advisers and Director of the Federal Chancellery, when Germany joined the Council of Europe and the European Coal and Steel Community, was Hans Globke. Globke had been a leading Nazi civil servant, associate of Adolf Eichmann and an anti-Jewish activist. In 1963 he was given a life sentence by an East German court in absentia.

Our own home grown fanatics also wanted an EU super state. Oswald Mosley, leader of the British Union of Fascists, was a passionate advocate of a federal European state with a protected economic zone: “The new idea of Europe a Nation.” 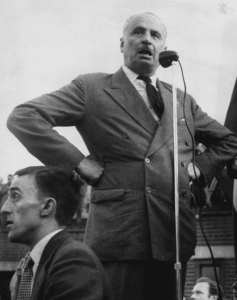 In fact, the relationship between wartime criminals and EU superstates became so obvious, that the think tank Open Europe wrote a rebuttal in 2014:

“On the surface, it would appear that there must be something to the argument that Nazi plans for Europe have quite a bit in common with todayʼs EU.”

They go on to explain how that argument falls apart because Nazi plans never came to fruition. Note to Open Europe: the Nazis never had a chance to take their plans to their final conclusion because they lost.

Though there are plenty more mad and bad people and plots, it is still considered wrong to suggest that the EU is the continuation of a Nazi project, or even a communist project – despite the hard-line Communists in the European Parliament.

But whether Communism or Nazism, some streams of thought that ran through the murderous ideas of the 20th century may have trickled into the 21st century. Bertrand Russell distilled the most basic human instinct behind these forces: “Much that passes as idealism is disguised hatred or disguised love of power.”

However, one recurring theme from the past is disturbing. Whether denying that increased attacks on Jews in Europe are mostly due to Muslims; failing to monitor its Middle East aid that may end up going to proscribed terrorist organisation Hamas; or leading the lopsided boycott, divestment and sanctions (BDS) movement against Israel, the EU skirts too close to anti-semitism.

In most cases, the EU would argue it is well meaning – and I suppose we are lucky that this generation of authoritarians are more “touchy feely” than the last lot. They worry about wind turbines, human rights and working hours. But the impulse behind the good intentions is always the same: the desire to control others because they think they know best.

The EU reeks of this and millions of citizens in Greece, Italy, Portugal, Spain, and other impoverished EU regions, can bitterly testify to the damage done by this latest utopian project. Further, EU open borders policies have brought a fifth column to Europe who despise Western civilisation, support terrorism and more recently are responsible for a wave of sexual assaults that are changing the way women live.

It is ironic that all of this is the result of policies driven by German guilt for its war crimes. Denial is the answer to these mistakes. It always is when utopian politics becomes a religion and collides with reality. These are the political hallmarks of the totalitarian movements of the 20th century, and the EU carries them.

These movements may talk about peace, equality and freedom. They may even believe it. But which ever century or what ever government, whether they commit genocide, or just cause poverty and economic meltdown, chaos is always the result, and it will be again.