That’s because the blogs were generally written by the kind of old school Conservatives, classical liberals and libertarians (Dan Hannan; Toby Young; Ed West; Douglas Murray; etc) who considered the former house journal of the Tory shires their natural home and who remembered the glory days when it was a proper paper featuring the likes of Bill Deedes, Hugh Massingberd and Auberon Waugh, who knew stuff and could write.

The paper, on the other hand, was already well on its way to being taken over by teenage scribblers who really had no concept of The Telegraph brand and wouldn’t have cared anyway because while they were at “Uni” studying kite surfing, Fruit Ninja and advanced refugee counselling they never actually met anyone who was to the right of Lenin and so treated The Telegraph like a version of The Guardian only with slightly different letter heading.

I felt this clash particularly keenly on the subject of environmentalism.

There I would be on the blogs pages getting millions of hits by breaking important stories about the biggest scientific fraud in history – Climategate, for example.

Against me would be the entirety of the print edition’s news pages, environment pages, science pages and City pages rehashing the latest scaremongering drivel about man-made global warming, melting ice caps and the urgent need to produce more renewable energy. The Telegraph‘s natural readership would have hated this of course: but where else could they go?

Despite the awfulness of their SJW-lite politics, I got to know and like some of those SJW-lite scribblers. Sure they kept sabotaging my decent stories with their half-baked crap based on press releases from Greenpeace but because I’ve got kids of my own I tend to give the youth a lot of leeway.

Tom Chivers, for example. He’s a lovely bloke, family man, now a science writer at Buzzfeed and, I tell you what, he doesn’t half do a jolly good light feature about sharks.

As a shark buff myself – like him, I’ve cage dived with great whites off South Africa – I totally recommend this shark identification quiz he did the other day. It’s perfect Buzzfeed. Indeed it’s what Buzzfeed was meant for: listicles and shit.

Where Tom and I must part company, now as ever, is on the subject of climate change. I’ve monstered him on this subject before but he won’t back down because he’s got a science degree – combined with the cocksure arrogance of youth and instinctively lefty politics – and thinks the facts are on his side.

Does young Tom go on to write about the data-fudging, noble-cause corruption, groupthink, institutional malfeasance, pal review and scaremongering which have brought about all those “Hottest Day/Month/Year Headlines”?

Tom hates homeopathy. But what he’s done here is the equivalent of calling three homeopaths and getting them to confirm that diluting stuff makes it more powerful and that arnica’s particularly good for bruising.

Enough bitching: what about Tom’s science?

Well, this has now been pretty effectively demolished by Paul Homewood, under the winning headline “More Hottest Year Evah Nonsense.”

Do read Homewood’s post in full. It’s an invaluable put down not just to Chivers’s Buzzfeed article but also to all the myriad other articles you see on this subject at places like the BBC, The New York Times, WaPo, MSNBC, The Guardian, ABC and so on because it explains, very simply and clearly, why the current swathe of “Hottest Year Evah” stories are based on flawed science.

Surface temperature datasets are so flawed (Urban Heat Island effect; poor siting issues; large areas of the world where there is no coverage) as to be untrustworthy. Satellite data don’t show nearly the same extreme warming trend: this year’s high temperatures, the result of a strong El Nino, are roughly the same of those as of the (similarly strong) El Nino of 1998. 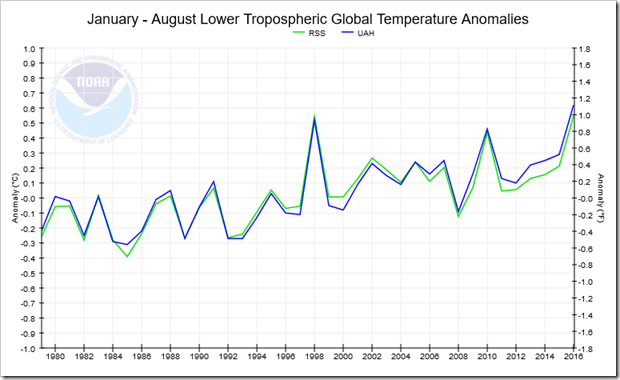 The Warmists have vanished the Pause, just like they tried to do with the Medieval Warming Period

I love this new scary chart, produced by one of Chivers’s alarmists. But does it bear any relation to observed reality? 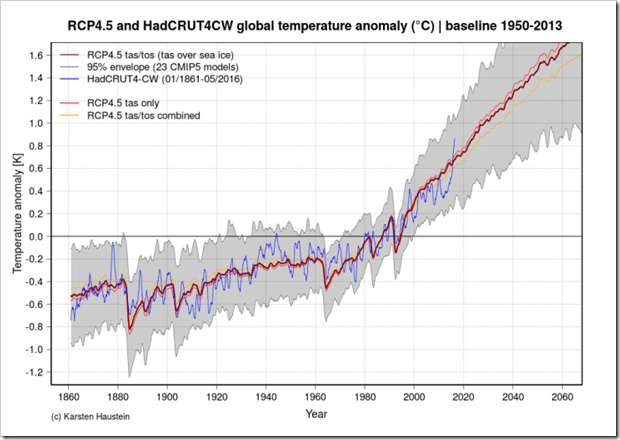 Why aren’t the alarmists looking at ENSO, which – as Homewood notes – offers a much better explanation of climate than man-made global warming theory?

The real story behind temperature trends since 1979, the start of the satellite era, concerns the changing pattern of ENSO, the El Niño/Southern Oscillation, described by NOAA as the most important coupled ocean-atmosphere phenomenon to cause global climate variability on interannual time scales.

We’ve currently been experiencing a run of strong El Ninos. When these give way to a run of strong La Ninas, we can expect temperatures to drop below average. I’m not looking forward to this. I’d much rather have abnormally warm weather than abnormally cold weather.

Here’s the sad thing, though. Lots and lots of earnest liberal-lefty kids are going to read Chivers’s Buzzfeed post and go – “Wow! Science-y scientists sciencing the shit out of climate science, in a piece with lots of science in it, written by a guy with a science degree and a tag that says ‘science writer” – and have all their half-baked convictions about the reality of man-made global warming confirmed.

None of them are going to come anywhere near here – nor anywhere near Homewood’s blog. So the generational and ideological divide on the subject of climate change is doomed to grow wider and ever more bitter.

Just as well, isn’t it, that when it all seriously starts kicking off, we red-meat conservatives are going to be better skilled in weapon usage and more heavily armed than the kind of tofu-eating metropolitan dweebs who read crap like Buzzfeed?