Here is what Britain’s Home Secretary seems to think was the most shocking aspect of yesterday’s violence in London:

I agree that it isn’t a pretty sight — and that the location where the man chose to relieve himself is unfortunate: right next to the memorial to PC Keith Palmer, the police officer murdered outside the Houses of the Parliament in 2017 by an Islamist terrorist.

That said, does the man look like he is deliberately insulting the memory of PC Palmer? Hardly. In all likelihood he hasn’t even noticed the small memorial. He’s relieving himself, as rough men do — especially when they’ve had a bladder full of booze — against the nearest pillar. Remember, all the public conveniences in London are currently closed because of the lockdown. The options in Parliament Square, if you’re desperate to go, are very limited right now. 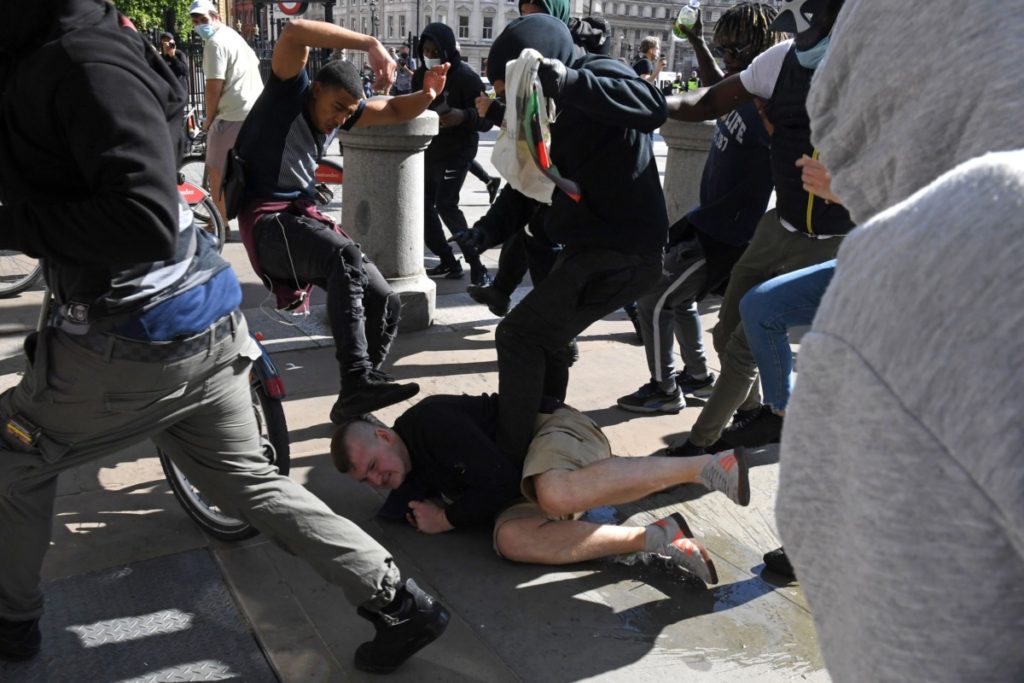 This isn’t to defend public urination in British streets, merely to offer a sense of perspective sadly missing from a lot of the media coverage of yesterday’s violence, which appears determined to promote the narrative of radical leftists like Mayor Sadiq Khan that “far-right” groups are a much bigger threat than the radical left.

The facts speak otherwise: many more police officers were injured last weekend by Black Lives Matters rioters and far more property damaged than in this weekend’s counter-demonstrations by various groups (some of them peaceable veterans; some of them football hooligans spoiling for a fight).

After talking with the @metpoliceuk and reaching an agreement, many veterans have agreed to leave and let the police tackle the hooligans.
A handful of veterans are still at the Cenotaph assisting the police pic.twitter.com/Dh1QhfcVBg

Nor is there much doubt that yesterday’s clashes would have been entirely avoidable if the police had done their job at last week’s BLM demos. If they had hit the hardcore of professional agitators hard, arrested anyone who vandalised public property or attacked the police, not run away at the first whiff of grapeshot, defended Britain’s heritage, not taken the knee, etc. — then the counter-demonstrations by people outraged by the police’s and the government’s apparent surrender to the radical left would not have been felt necessary.

And most of the very ugliest incidents yesterday — including at least one man who was beaten to a pulp — were perpetrated by gangs of BLM supporting thugs, not by anyone from the far-right.

Protesters attacked a suspected member of a far right group outside Waterloo station. He was later taken away in an ambulance after police rushed in. pic.twitter.com/qGaiafI7TV

Yet it suits the left-liberal Establishment, which now includes formerly conservative newspapers, to cast the “far-right” as the bad guys and the hard-left, Antifa-allied agitators of Black Lives Matter as paragons of virtue.

You can understand it when the left does this: it’s all part of their ultimate goal to overthrow the system.

But when Priti Patel, a supposedly robust Home Secretary from the Thatcherite wing of the Conservative Party, starts tweeting out left-wing propaganda talking points, you know the country is in a very serious mess.

Come on Priti Patel. Raise your game. We’re not stupid. Anyone with eyes to see recognises that little by little, the Conservative government we elected in the belief that it was our only bulwark against the neo-Marxist Labour party, is instead betraying our country to the left.

When that police officer was thrown from her horse and punctured her lung, the BBC didn’t really touch it on their news coverage.

Any opportunity however to paint Britain as a far-right backwater and they jump at the opportunity to show clips of the *right kind* of violence.