Speaking at the annual meeting of the Valdai Discussion Club in the Black Sea resort of Sochi, Putin argued children being “taught that a boy can become a girl and vice versa” is a monstrous act that verges on being “a crime against humanity.”

According to the Washington Post, the Russian leader also “suggested that transgender rights supporters were demanding an end to ‘basic things such as mother, father, family or gender differences.'”

In the same speech, Putin touted the “spiritual values and historical traditions” while cautioning against “sociocultural disturbances” emanating from Western liberals, whom he said believe in “the aggressive deletion of whole pages of their own history, reverse discrimination against the majority in the interests of minorities … constitute movement toward public renewal.”

“It’s their right, but we are asking them to steer clear of our home. We have a different viewpoint,” Putin said. 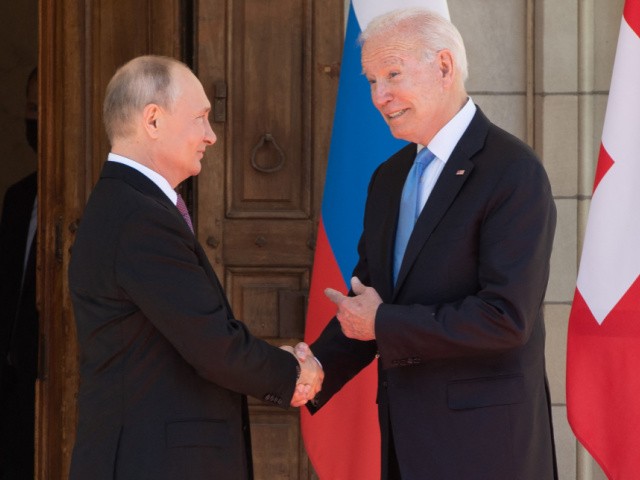 U.S. President Joe Biden and Russian President Vladimir Putin shake hands as they arrive at Villa La Grange in Geneva, for the start of their summit on June 16, 2021. (SAUL LOEB/POOL/AFP via Getty)

Vladimir Putin sparked international outrage in 2013 when he signed anti-“gay propaganda” legislation that reportedly aimed to prevent LGBTQ content from being marketed to children. The law was condemned by multiple human rights groups and the vast majority of Western nations, who denounced the law as being too vague and discriminatory towards sexual minorities.

“There is no legal definition in the Russian law of what constitutes ‘propaganda of homosexuality’ and the law could be interpreted very loosely. They are going to punish people for something which is perfectly legitimate – expressing themselves, being themselves,” argued Amnesty International at the time.

The European Court of Human Rights later ruled that the law had violated the European convention on human rights, claiming that it “had reinforced stigma and prejudice and encouraged homophobia, which was incompatible with the values of a democratic society.”

Tatiana Stanovaya, head of the Moscow-based R.Politik think tank, told the Washington Post that Putin’s remarks last Thursday were designed to rally “hardcore conservatives and supporters of traditional values” around his presidency.

“This ideological spin, which is becoming more and more official and concrete, is the main aid to repressions, much stronger than any election,” Stanovaya told WaPo.

Matthew Sussex, a Russia expert at the Australian National University, said Putin was signaling he “stands for values that will not divide society and throw it into chaos.”

“On the one hand, it’s a unifying message. But on the other hand, it does hit … the transgender and gay communities that the Russian government has continued to target,” said Sussex.