Australian pop star Cody Simpson warned against tyranny in a recent social media post, urging his 4.1 million followers to “stand up to oppression and authoritarianism,” adding that “a fearful public is a controllable public.”

“Don’t believe or buy into this tyrannical and fear-mongering crap,” Simpson said in a recent Instagram Stories post, according to a report by Daily Mail. “Stand up to oppression and authoritarianism. Life is not as chaotic as the news would like you to believe. Drama sells newspapers.”

Cody Simpson went on to say that he doesn’t consider himself a part of “this strange, backwards society,” but has nonetheless been forced to “abide by certain ridiculous laws and rules in order to remain a ‘free’ citizen.”

I really don’t consider myself a member of this strange, backwards society but due to the decades of this gradually established order, and these societal power structures and government systems now arranged and cemented, I have no choice but to abide by certain ridiculous laws and rules in order to remain a “free” citizen and not get locked in prison or unable to make a living or pursue my goals for not “playing the game.” 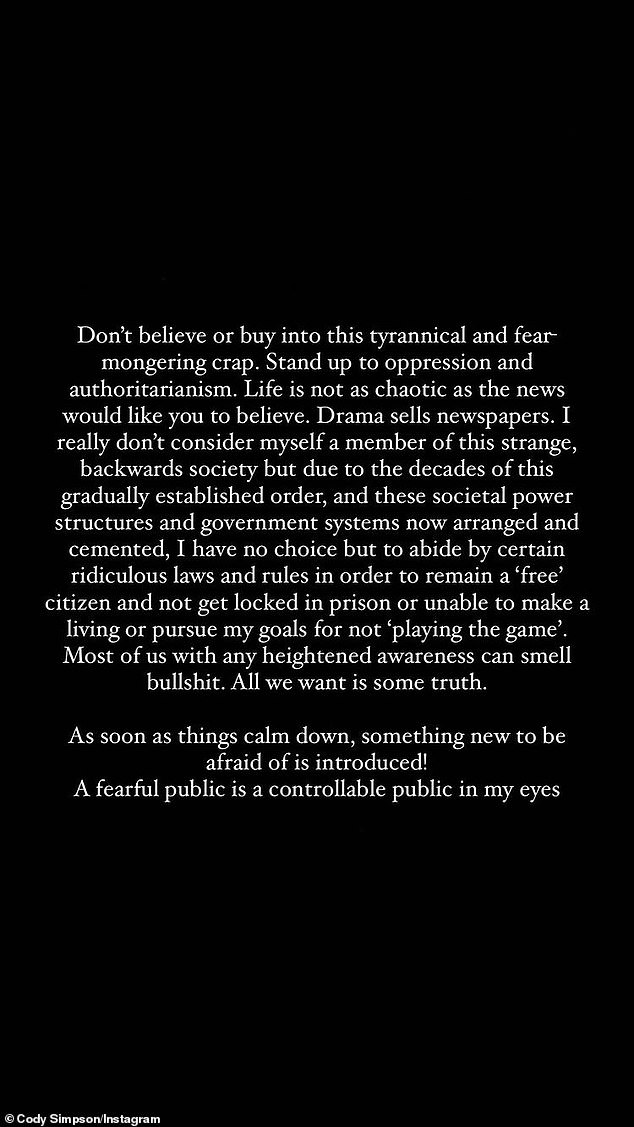 While Simpson didn’t specify on what exactly he was talking about, it appears his post was related to the seemingly never ending draconiana measures taken by governments in response to the Chinese coronavirus pandemic. Indeed, Australia is now reportedly carrying out quarantine camps for the unvaccinated.

The singer finished his message by suggesting fear is being used as a tactic to control the public.

“Most of us with any heightened awareness can smell bullshit,” Simpson said. “All we want is some truth. As soon as things calm down, something new to be afraid of is introduced! A fearful public is a controllable public in my eyes.”

This is not the first time Simpson has been critical of the handling of the coronavirus.

In August, he criticised Queensland’s lockdown, sharing a photo of himself during an early morning swim at the beach.

“Making the most of Aussie lockdown,” Simpson wrote at the time. “We can’t train at our pool all week. But more importantly most people have had to shut their businesses.”

“It’s a curious and complex argument but I hope the world can open again soon and we can go back to normal life,” he added. “If politicians and bureaucrats had to sacrifice their salaries or take pay cuts during lockdowns, I wonder how long they’d last. Food for thought.”

“Fear is the best weapon others have in destroying wide-open awareness and freedom,” Simpson said. “Turn off the news and go outside.”