ROME — Pope Francis reiterated his appeal for an intergenerational alliance between young and old Wednesday, insisting the elderly “possess the wisdom of dying.”

“The alliance between the elderly and children will save the human family,” the pontiff said during his weekly general audience in the Vatican. “There is a future where children, where young people speak with the elderly,” a dialogue without which “the future cannot be clearly seen.”

“Can we please give back to children, who need to learn to be born, the tender witness of the elderly who possess the wisdom of dying?” he pleaded.

“Will this humanity, which with all its progress seems to be an adolescent born yesterday, be able to retrieve the grace of an old age that holds firmly to the horizon of our destination?” he added.

The pope went on to assert that as difficult and frightening as it is, death marks the beginning of “the beautiful part of life.” 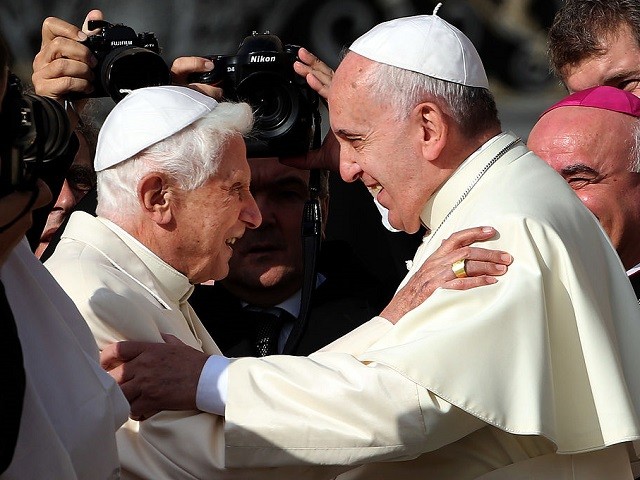 File/Pope Francis (R) greets Pope Emeritus Benedict XVI as he arrives at St. Peter’s Basilica during a celebration for grandparents and the elderly on September 28, 2014 in Vatican City, Vatican. (Franco Origlia/Getty Images)

“Death is certainly a difficult passage from life for all of us it is a difficult passage. All of us must go there, but it is not easy,” he stated. “But death is also a passage that concludes the time of uncertainty and throws away the clock.”

“This is difficult because this is the passage of death,” he continued. “For the beautiful part of life, which has no more deadlines, begins precisely then. But it begins from the wisdom of that man and that woman, the elderly, who are capable of bearing witness to the young.”

“Let us think about dialogue, about the alliance between the elderly and children, of the elderly with young people, and let us do it in such a way that this bond is not broken,” he concluded. “May the elderly have the joy of speaking, of expressing themselves with the young, and may the young seek out the elderly to receive the wisdom of life from them.”