Facebook has censored a video of Cardinal Juan Sandoval Íñiguez, archbishop emeritus of Guadalajara, for suggesting that globalist leaders are exploiting the coronavirus pandemic to bring about a new world order.

In place of the cardinal’s weekly video, Facebook exhibited a greyed-out screenshot emblazoned with the banner “False information.” Underneath, Facebook added, “This publication repeats information about COVID-19 that independent fact checkers deemed false.”

On its Facebook page, Semanario Arquidiocesano Guadalajara, an information service run by the Archdiocese of Guadalajara, posted the following screenshot on January 13, along with the text “Cardinal Juan Sandoval denounced the imposition of a new world order, hours later his video was censored”: 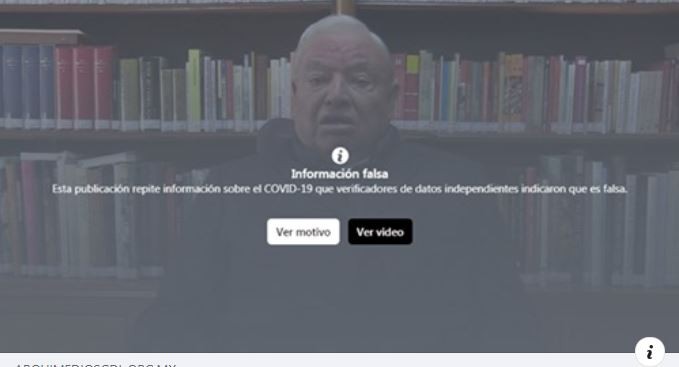 In the nine-and-a-half-minute January 12 video, bearing the title “Plot of a new world order,” the cardinal begins by saying, “Dear friends, this will go on for a long time.”

“This pandemic won’t end in a month or two months, perhaps not this year, perhaps not in three, four, five, six years,” he said. “That’s what these men want. It will be a long haul.”

“It’s a tough, difficult situation, the likes of which has not been seen in human history,” he said:

“Bill Gates is a prophet and foretells the future,” the cardinal noted wryly, “and not only did he predict the coming of the coronavirus, but has also warned of a possible future smallpox pandemic.”

During the pandemic, Cardinal Sandoval has criticized the shuttering of businesses and services as disproportionate measures to curb the spread of the virus.

“What they’re after is a world government, a new world order,” the cardinal asserts in the video.

“They want a single world government, a single army, a single currency, a single economy, and also a single religion — that will certainly not be the Christian religion,” he said. “It will be the religion of Mother Earth, in the name of humanity and universal brotherhood.”

“To this end, pandemics serve to weaken nations; they impoverish and indebt them, bringing down their economies,” Sandoval said. “They also weaken education, closing schools and replacing them with distance learning.”

“These pandemics also impede religious practice, as we saw all last year,” he said. “They close the churches, reduce the number of people who can worship.”

“But above all, they are creating fear, a terrible fear among the people,” he warned.