Japan’s Health Ministry on Thursday suspended the use of 1.63 million Moderna vaccine doses — used to inoculate against the Chinese coronavirus — after it received reports that an unknown foreign substance was found in some unused vials of the vaccine at certain distribution sites.

The 1.63 million Moderna vaccine doses suspended from use on Thursday are from the same production line as the contaminated vials detected on Wednesday.

“At least 180,000 potentially contaminated shots have already been administered in 19 of the country’s 47 prefectures including Tokyo and Osaka,” Kyodo News reported on August 26, citing its own analysis of local Japanese government data.

“The foreign substances have been confirmed since August 16 at eight vaccination sites in five prefectures — Ibaraki, Saitama, Tokyo, Gifu and Aichi. They were found in a total of 39 vials,” the Japanese news agency noted.

Japan’s Ministry of Health, Labour and Welfare has yet to determine the composition of the foreign matter detected inside the vials on Wednesday, though it said the substance resembled “small black” particles “a few millimeters in size.” An unnamed senior official of the Health Ministry told reporters on Thursday the materials “could be metallic fragments,” according to Kyodo News. 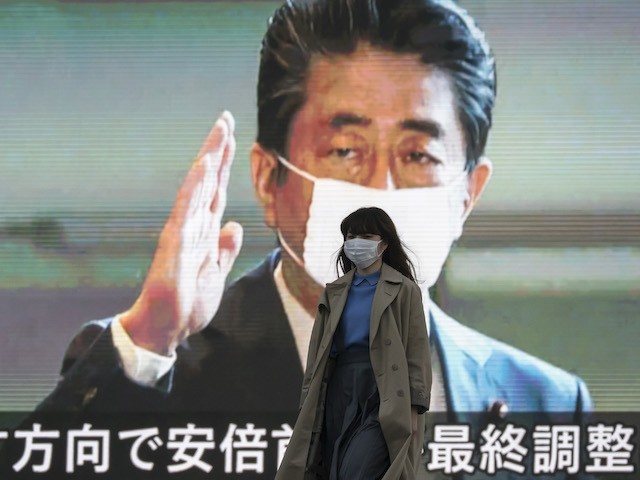 A pedestrian wearing a face mask walks in front of a monitor displaying an image of Japan’s then-Prime Minister Shinzo Abe during a news broadcast on April 06, 2020, in Tokyo, Japan. (Tomohiro Ohsumi/Getty Images)

Both Moderna, a U.S.-based pharmaceutical company, and Japanese drugmaker Takeda Pharmaceutical Co., which is in charge of the sale and distribution of Moderna’s Chinese coronavirus vaccine in Japan, “said they had not received any reports regarding safety issues” related to the vaccine in question as of Thursday, according to Kyodo News.

“To date, no safety or efficacy issues have been identified,” Moderna told the news agency, adding that it was “carefully assessing this matter and at this point does not have further comments on root causes.”

Asked by reporters in Tokyo on Thursday if the Moderna vaccine suspension would adversely affect Japan’s nationwide rollout of Chinese coronavirus vaccines, Japanese Prime Minister Suga Yoshihide said he had “been briefed by the health ministry that it will not have a significant impact.”

The 1.63 million now-suspended Moderna doses were distributed to 863 vaccination sites across Japan and manufactured on the same production line in Spain at the same time period, according to Japan’s health ministry. The doses are stamped with the following lot numbers: 3004667, 3004734, and 3004956.

Tokyo’s metropolitan government said Thursday about 9,100 people may have received a dose of a potentially contaminated vaccine at two vaccination sites it operates. “Among other prefectures, Osaka counted about 50,000 such shots, Hyogo 41,500 and Aichi 28,000,” according to the Japan Times.