Ivanka Trump called for a “congressional fix” when asked by a liberal journalist to say “what role should the ‘dreamers’ be playing in a future workforce?”

“Well, I think this is a very complicated issue that needs a long-term congressional fix,” Trump cautiously responded to Nina Easton, a liberal former journalist who is married to a political consultant for establishment GOP politicians. Trump was attending an October 9 event titled  “Fortune‘s Most Powerful Women Summit,” and said:

I am personally of the opinion, and the president has stated this, that we have to figure out a good solution that protects these innocent people, many of whom were brought to this country as children. But you know, there has to be a long-term fix, and it cannot be bandaged over at a presidential level [by] another executive order which can be rescinded by a subsequent administration.

That considered response matches President Donald Trump’s frequent statements in favor of a legislative fix for the growing population of young illegals who were allowed to enter and stay in the nation by decades of underfunded border security. That population’s estimated size ranges from 690,000 to 3.3 million. On October 8, the President released his popular immigration reform principles, saying in a letter to Congress that:

These findings outline reforms that must be included as part of any legislation addressing the status of Deferred Action for Childhood Arrivals (DACA) recipients.  Without these reforms, illegal immigration and chain migration, which severely and unfairly burden American workers and taxpayers, will continue without end.

Also, Ivanka declined to use the progressives’  “dreamer” term for young illegals. The progressive term implies that American youths have no dreams or ambitions that a politician need respect.

But Ivanka also pushed the accelerator by urging a greater use of foreign workers instead of Americans, so contradicting her father’s Inauguration Day promise to “Buy American, Hire American.” She said:

And I think when the Senator was speaking about the need for comprehensive immigration reform, I think that is the right approach because our system is flawed, and it is not equipped to handle the challenges and our visa program is deeply flawed—we’re not retaining the best talent for the jobs that we need and that has to fundamentally be reconsidered.

The “visa program” she referred to includes the various unpopular H-1B, OPT, J-1, and L-1 outsourcing programs, plus likely the proposed “staple” visa program, which would allow foreign students at U.S. postgraduate colleges to receive a green card stapled to their graduate degree.

The “staple” proposal is very popular among business groups because it would create a huge wave of salary-cutting competition in the skilled job sectors where young Americans hope to earn a good living. The salary-cutting competition would be intensified by the government’s offer of the very valuable prize of citizenship to foreign graduates who take jobs sought by the 800,000 Americans who graduate from college each year with skilled degrees in business and medicine, architecture and science, technology, and math.

That proposed staple program also contradicts the president’s set of immigration principles, which begins by stating:

The Trump Administration is ready to work with Congress to achieve three immigration policy objectives to ensure safe and lawful admissions; defend the safety and security of our country; and protect American workers and taxpayers.

Immigration reform must create more jobs, higher wages, and greater security for Americans — now and for future generations.  The reforms outlined in the enclosure are necessary to ensure prosperity, opportunity, and safety for every member of our national family.

The visa programs counter those goals because they reduce wages for Americans and deter Americans from high-tech carers where they must compete against foreign migrants who know their low-wage jobs can be topped off by an offer of citizenship.

Ivanka Trump’s reference to “the Senator” was to Sen. Amy Klobuchar, who earlier spoke at the conference about a claimed need for “comprehensive immigration reform.” Klobuchar said:

[One of the] other things we could do to jump-start our economy is immigration reform, comprehensive immigration reform. We have the ongoing issue with DACA that we have to fix, of course, and there are a lot of my colleagues who make a very good humanitarian argument which I embrace, but for me, I always make the economic argument. Over 70 of our Fortune 500 companies are headed up by immigrants, 25 percent of our U.S. Nobel Laureates were born in other countries, and yet we have a situation where my hockey team in Minnesota … they can get unlimited visas for their players from Canada, but [the] Mayo Clinic can’t bring in a doctor because his spouse can’t work for seven years or 3M can’t bring in an engineer, so I think this economic argument for immigration reform has to be up front and center as we go forward.

In practice, the 3m company requested visas to hire 17 foreign white-collar professionals instead of young Americans in 2016, according to the MyVisaJobs.com website.

The Mayo Clinic is a non-profit, so it can bring in as many foreign doctors, surgeons, technicians and white-collar professional as it wishes via the H-1B visa program. In 2016 it was given permission to import 140 white-collar professionals to work as gastroenterologists, researchers, family doctors, pediatricians, computer experts and industrial engineers. Twenty-one of those imported professionals were slated to work in satellite facilities outside Minnesota. 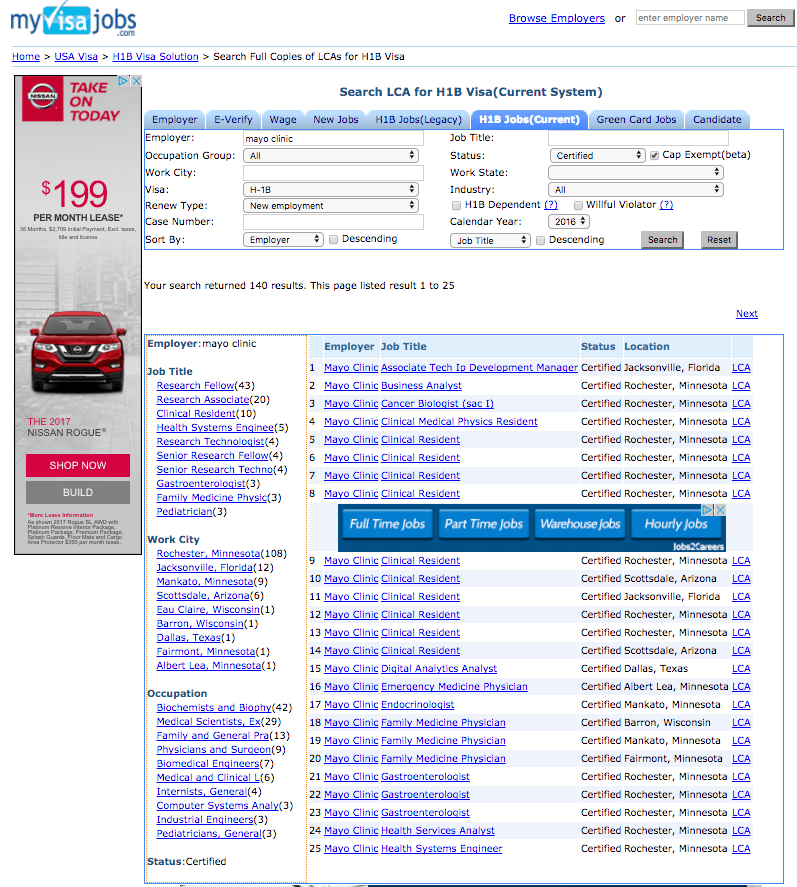 Klobuchar noted that her sister is an accountant. In 2016, the federal government approved 2,428 requests for H-1B visas to import foreign accountants for jobs sought by U.S. accountants, according to the MyVisaJobs.com website. 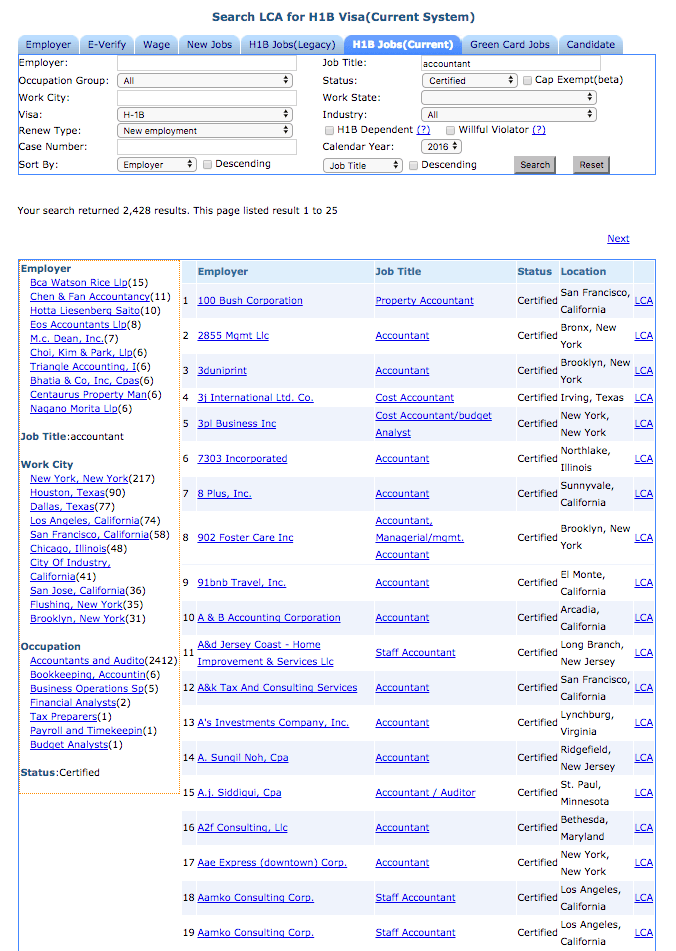 Overall, in 2016, the federal government approved 2,845 visa-request for jobs in Minnesota. That Minnesota total included 47 people for accountancy jobs. 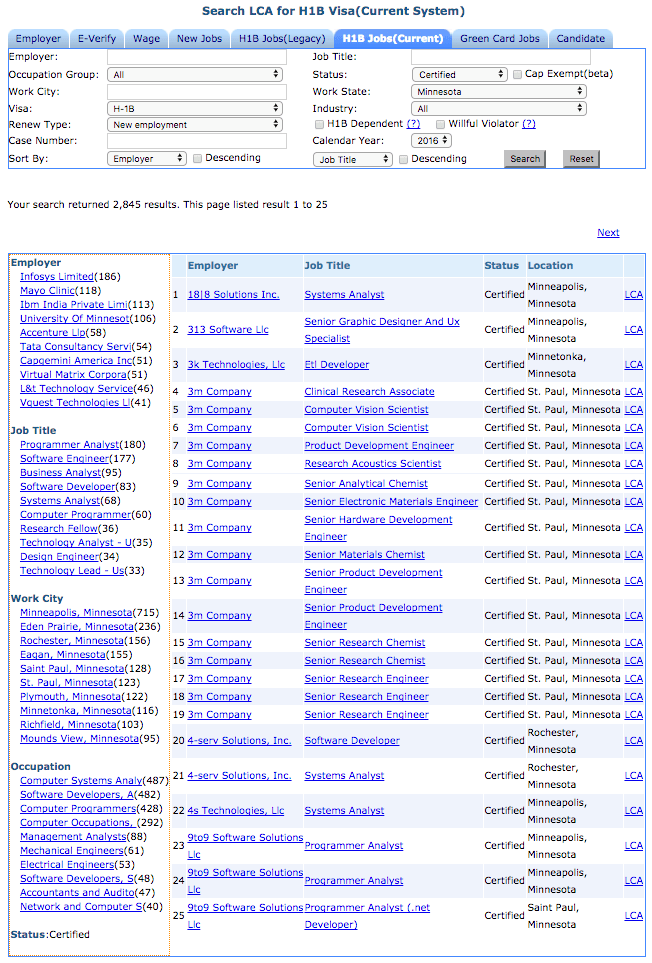