India’s ambassador on Wednesday acknowledged a meeting with Sen. Dick Durbin, the top Democrat who is blocking GOP Sen. Mike Lee’s S.386 bill that would accelerate the inflow of Indian graduates into the professional jobs sought by American graduates.

“Thank you @SenatorDurbin for an engaging discussion on the value that high-skilled #Indian professionals bring to the #US economy by filling the #STEM shortage,” said a December 4 tweet from Ambassador Harsh Shringla. The roughly 900,000 imported Indian visa-workers are “critical for the competitiveness of #American #tech industry,” Shringla claimed.

Shringla’s posted a tweet of his meeting with Durbin, which was quickly endorsed by some of India’s H-1B contract-workers in the United States who are lobbying for fast-track green cards, often dubbed “GCs.”

Thank you so much Mr. Shringla for taking the lead. We reached out to multiple politicians and diplomats from India to seek support for us and and it feels good to see you take the lead.@realDonaldTrump @sambitswaraj @DrSJaishankar @narendramodi

“It’s quite concerning to see the Indian Ambassador to the United States showing up to events where he is pushing for immigration policies that provide preferential treatment to citizens of India,” said Kevin Lynn, the founder of Progressives for Immigration Reform.

Well, the STEM shortage is a myth, and the light is beginning to shine on visa programs like the H-1B & OPT that have been abused to strictly import cheaper labor from India while simultaneously, American workers are being laid off and having to train their foreign replacements on these visas.

Durbin’s office did not respond to questions from Breitbart News.

Durbin is opposing Lee’s S.386 bill because it would send nearly all of the 120,000 “Employer-Based” green cards each year to the software industry’s imported Indian workforce. That radical shift would deny green cards to many other immigrants, including foreign scientists at U.S. universities.

Durbin’s rival bill, the RELIEF Act, would provide more green-cards for Indians — and more cards for many other foreign workers who would drive down the salaries of American professionals.  Durbin is a consistent advocate for higher immigration into the United States. “We cannot open our doors to everyone who wants to come through tomorrow. “There has to be an orderly process here — [but] a process that really accommodates the world’s ambition to be part of the future of America,” he said in November.

The award of more green cards to India’s workers would be great for Indian’s economy, partly because the country’s most significant export is the millions of Indians who work abroad in the Middle East, Asia, Europe, and the United States.

In the United States, there are roughly 900,000 Indian college-graduates in jobs sought by American graduates. They get the jobs via the H-1B, Optional Practical Training, L-1, and J-1 visa-worker programs. In fact, U.S. investor-run technology companies have hired so many Indian visa-workers that Indian managers and recruiters now lead or dominate many U.S-owned companies, including Google, Microsoft, and Adobe.

Some of the Indian managers and recruiters at U.S. companies prefer to hire Indians for open jobs, and routinely discriminate against U.S. job seekers, according to Indians and Americans who have witnessed hiring actions.

India’s growing diaspora in the United States is lobbying for more green cards for Indians. For example, Sharma advocates for India’s H-1B outsourcing worker, including roughly 300,000 H-1B workers who complain they cannot get the green-cards that their U.S. employers promised them. India’s U.S. workforce cannot get the cards because the volume of India’s workers in the United States has created a massive backlog for the roughly 20,000 green cards offered to India each year. The roughly 20,000 cards are the Indian allocation under the pro-diversity “country caps” set in the 1965 immigraiton law.

India’s U.S. workforce is providing much of the lobbying power for Sen. Mike Lee’s S.386 bill.

Folks stuck in GC backlog, if you haven't participated yet, now is the time @SenatorDurbin heard our compelling stories.We appreciate & respect his time.Thx everyone for enduring the cold to meet Senator. Pls call Senator's office 202 224 2152@immivoice @SIIA_US @GcReforms pic.twitter.com/j7QvzqkdmB

Many of India’s visa-workers in the United States are calling Durbin’s office to get him to agree with Lee’s bill, which is backed by the GOP and its business donors. The calling campaign has been conducted by Indians living far from Durbin’s home state of Illinois: 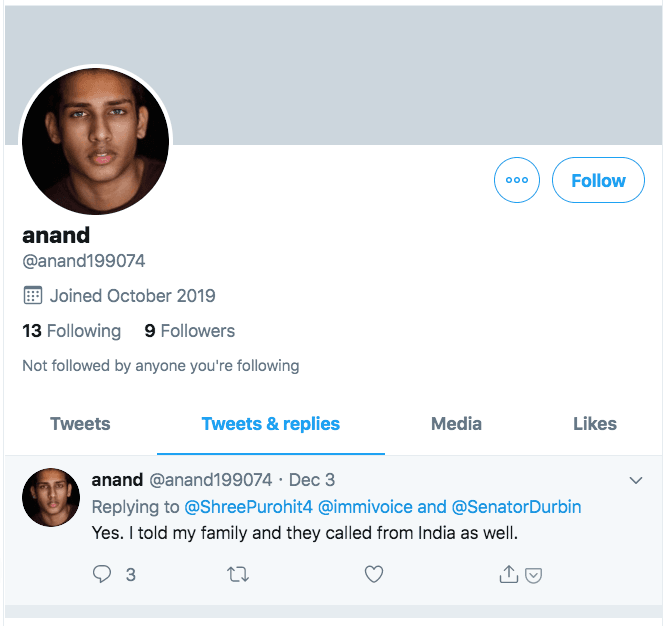 In July, Shringla touted India’s support of the S.386 bill, which would help India’s economy by steering more income and jobs into the U.S.-India Outsourcing Economy.

“I must compliment the U.S. House of Representatives for adopting the Fairness for High Skilled Immigrants bill which removes country caps on the H1B visas,” Indian ambassador Harsh Shringla told a D.C. meeting of lobbyists and advocates on in July. He continued: “I think this is an important initiative. We have worked with congressmen across the board, and we’re happy this is a bipartisan initiative in Congress, and we’re hopeful the Senate would follow course and also adopt the bill.”

India’s lobbying is backed by the U.S. technology industry, which wants to promote the use of India’s workers, partly because India’s government has the power to curb U.S. investors’ access to India’s growing consumer market.

The hiring of India’s workers by U.S. employers has helped stock-market investors in several ways.

It has helped to flood the labor market for American professionals, so pushing down U.S. salaries. It has also shifted many U.S. jobs to low-wage Indian worksites. In general, stocks rise by roughly $10 for every $1 that can be cut from a company’s payroll.

The hiring has also helped major U.S investors get a foot into the Indian consumer marketplace. For example, Walmart and Amazon are pushing the S.386 bill as they try to get India’s permission to expand their retail networks throughout India.

But the wave of Indian outsourcing has slammed the U.S. professional sector and has pushed many Americans professionals out of good jobs. The establishment media largely ignore the huge scale and nationwide impact of the job losses by Americans. But losses have gradually created a series of professionals’ groups who are lobbying against the H-1B program and the S.386 bill.

Many immigration pundits have come out against this [Lee] bill because it would redistribute employment based green cards strictly to Indian citizens working in the IT sector, for the next decade. It’s a zero sum bill. Sen. Durbin realized how bad this bill was so he blocked all attempts made at passing this bill through the dubious process of Unanimous Consent voting and has asked for a public hearing. Because Sen. Durbin has become a roadblock for the Indian IT sector, we now see a tweet by Ambassador Shringla meeting directly with Sen. Durbin talking about how there’s a STEM shortage, and why it’s critical for the US economy to rely on the talents of Indian professionals.

Shringla met with Durbin on December 4 but has also met many other U.S. politicians, likely to lobby for greater use of Indians workers instead of U.S. graduates. For example, Shringla met with Gp Sen. Kevin Cramer, who is a leading supporter of the S.386 bill, which would reward more Indian graduates who take jobs in his home state.

Thanked @SenKevinCramer from #NorthDakota for his participation at the ‘Howdy Modi’ event and his support for a strong #India–#US partnership pic.twitter.com/41jcXLkntw

A great pleasure to meet Senator @SenBillCassidy of #Louisiana at the #CapitolHill office to brief him on the #India–#US relationship, in general, and our burgeoning energy cooperation, in particular pic.twitter.com/MyuU3hyDcw

Thank you @RepTedYoho for meeting me in your home sunshine state of #Florida – our shared vision of democracy, rule of law and equal opportunities for all citizens is the foundation of the 🇳 🇺🇸 strategic partnership @IndianEmbassyUS pic.twitter.com/uPpK1mkzKZ

Thank you @SenDougJones from #Alabama for meeting me on a busy day at the #CapitolHill to discuss the #India–#US strategic partnership and cooperation pic.twitter.com/wJ8dGSmdpj

Many U.S. investors hope to expand the U.S.-India Outsourcing Economy, which allows them to hire Indians in place of Americans, and then use the extra profits to spike their stock-market wealth:

Our Chairman, Ashok Mago, at a meeting with U.S. Indian Ambassador @HarshShringla. We are always excited to promote and elevate communication about business and trade between India and U.S. https://t.co/kU0lkhvb6k

The Indian diaspora includes roughly 900,000 workers and at least one million family members, and perhaps 200,000 Indians enrolled in college or universities, many of whom also hold jobs. The population also includes a growing number of unskilled illegals who pay smugglers, dubbed “agents,” to help them migrate to the United States. Many Indians also migrate into the United States to work as independent truckers.

The Indian illegals repay their smuggling debts by getting jobs at the shops, restaurants, and other businesses that serve the growing population of India’s legal visa-workers in California, New Jersey, Texas, Illinois, and Virginia.