Bandits have raped at least 180 migrants since May, including children, as they walked through the deadly and lawless jungle separating Panama and Colombia on their way to President Joe Biden’s open border, the Wall Street Journal reported.

Doctors Without Borders tallied the reported rapes as the migrants emerged from the northern edge of the Darien Gap jungle, a thruway for U.S.-bound migrants, including “extra-continentals,” government jargon for individuals from countries and regions far away from the U.S. southern border, including the Caribbean, South America, Asia, Africa, and the Middle East.

Many of the extra-continentals enter South American countries with lax visa rules and travel north to Colombia to enter the southern edge of the jungle. Those who survive the treacherous journey emerge on the northern edge of the Darien in Panama, the next leg and the first country in Central America in the northbound trail to the United States.

The raped migrants walked from Colombia towards the U.S. border because Biden’s deputies allow migrants who survive the trek to settle in the United States before their long-delayed asylum hearings.

On Monday, the Journal reported that gangs of armed men are raping U.S.-bound migrants, mainly on the Panamanian side of the jungle.

On Monday, the newspaper noted:

The humanitarian group Doctors Without Borders, which provides medical care to migrants in the hamlet of Bajo Chiquito, on the northern edge of the Darién [in Panama], says it has documented 180 cases of rape since starting operations here in May. Panamanian lawmakers who have received similar reports say they are alarmed by what they say appears to be a pattern of sexual violence against women who are en route to the U.S.-Mexico border.

“What surprises us is the systematic nature of this modus operandi,” said Owen Breuil, Panama coordinator for Doctors Without Borders. Mr. Breuil said his organization doesn’t know who the perpetrators were. In 70% of the cases, he said the victims, who include children, reported being attacked within Panamanian territory.

Doctors Without Borders medical personnel have reported the attacks to Panamanian authorities. The group believes the true number of victims is likely far higher since many migrants don’t report the attacks for fear of retribution or because they don’t want to slow their journey.

The newspaper also interviewed over two dozen migrants at three camps erected outside the jungle by the United Nations and the Panamanian government to help those who cross the jungle get ready to continue their journey to the U.S. Most of them told the Journal they had witnessed fellow migrants raped in the Darien, including children, when their parents were unable to pay extortion money to prevent the sexual abuse.

According to the newspaper, Panama’s Ministry for Public Security failed to respond to requests for comment on the attacks. 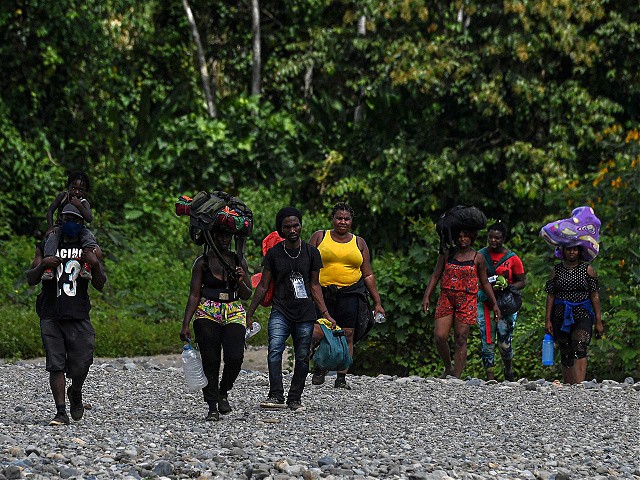 Migrants walk after crossing the Chucunaque river and walking for five days in the Darien Gap, in Bajo Chiquito village, Darien province, Panama on February 10, 2021, on their way to the US. – Migrants from Haiti and several African countries remain stranded at the Panama-Colombia border, while the Central American country is expecting a new wave of migrants. (Photo by LUIS ACOSTA/AFP via Getty Images)

When U.S. Customs and Border Protection (CBP) encounters at the southern border began to increase, ultimately reaching historic levels earlier this year, Republicans warned that the surge fueled rapes and other forms of sexual exploitation of girls and women migrating illegally.

Critics have blamed President Joe Biden’s lenient border security policies for incentivizing migrants from all over the world to make their way to the U.S.

For months, Panama has complained of an unprecedented wave of international illegal migrants heading to the U.S.

Panama and neighboring Costa Rica help some of those migrants continue their journey north by providing transportation. Breitbart News learned that the State Department provides humanitarian aid to migrants who cross. 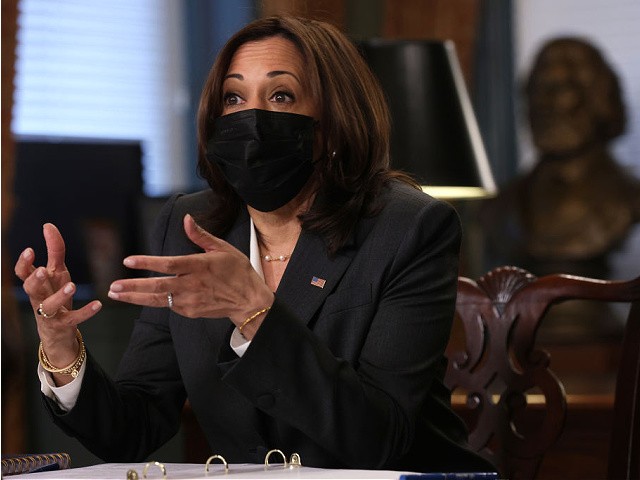 U.S. Vice President Kamala Harris speaks during a roundtable at the Ceremonial Office of the Vice President at Eisenhower Executive Office Building April 22, 2021, in Washington, DC. Vice President Harris held the meeting to discuss with foundation leaders on the immigration crisis at the southern border. (Photo by Alex Wong/Getty Images)

Without objection from the Biden administration, Panama and Colombia agreed in August to impose a daily limit this month of 500 on U.S.-bound global migrants granted safe passage.

However, a local of the Bajo Chiquito hamlet on the Panamanian side of the Darien told the Journal that up to 800 migrants emerge from the jungle in his region alone.

Panamanian officials vet the migrants they encounter and have already detected some terrorists trying to blend in with the flow of people heading to the U.S.

Biden has placed migration from Central America’s Northern Triangle (NT) countries of Guatemala, El Salvador, and Honduras at the center of his efforts to solve the U.S. southern border crisis, paying little attention to other countries.

In May, the New York Times reported the Biden team is releasing most extra-continentals who arrive at the border into U.S. communities.